Predictions for how the 2016 Eagles season will play out 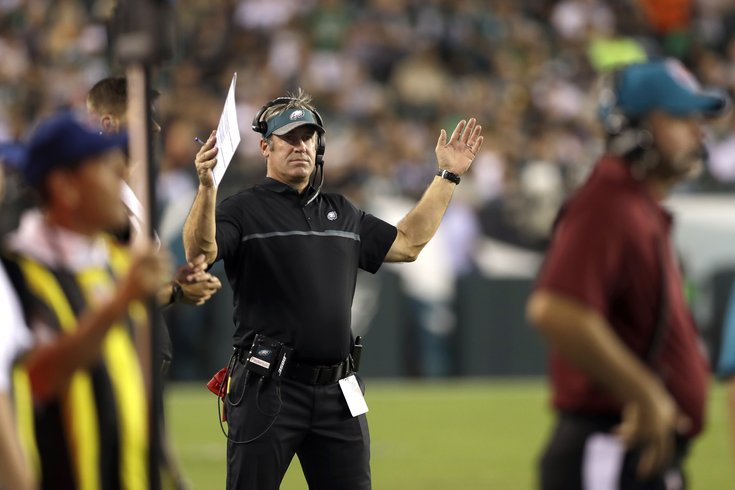 Philadelphia Eagles head coach Doug Pederson on the sideline during a preseason game against the Jets.

Last year, I started off our prediction post by lamenting, well, predictions. It may have seemed like a strange way to begin a post trying guess the Eagles record, but it wound up working out perfectly, because the predictions that followed were nothing short of atrocious.

We were all spectacularly wrong -- not unlike our predictions for the Phillies season.  Every single one of us predicted double-digit wins. The Eagles, in case you forgot, finished 7-9.

Now, the team has a new coach, a new quarterback, a new starting running back, a potentially great defense, and a bunch of question marks. So. Many. Questions. We've only seen Carson Wentz play a handful of (preseason) snaps, and we haven't seen much from Doug Pederson this preseason -- they kept their offensive play calling pretty bland throughout.

Maybe it's all those question marks that led our staff to predict a much lower win total for the Birds this season. Or, perhaps, we're all afraid of a repeating the same mistake from a year ago. Either way, here's a look at our predictions for the Eagles 2016 campaign.

The Eagles' defense has the chance to be really, really good in 2016. The front four will be led of course by Fletcher Cox, who was already an absolute beast in a scheme that did not maximize his strengths. He could be even more dominant at defensive tackle in Jim Schwartz's attack-style scheme. On the edges, the Eagles don't have that one "star" pass rusher, but they have three players who are more than capable of getting to the quarterback in Brandon Graham, Vinny Curry, and Connor Barwin.

On the back end, Malcolm Jenkins and Rodney McLeod form one of the best safety duos in the NFL. They'll help out an underrated, competent but not flashy cornerback group. If Jordan Hicks can stay healthy and Mychal Kendricks can be more consistent (his time is running out), the defense has the potential to do great things.

Ultimately, it'll be the defense that carries this team, but all eyes will be on rookie quarterback and new face of the franchise Carson Wentz. When the Eagles traded Sam Bradford to the Minnesota Vikings and named Wentz the starter, they went from a conservative pocket passer to more of a gunslinger with running ability.

Will they be better with Wentz in 2016? Maybe, maybe not. Most would lean toward "probably not." While I would agree to some degree, I don't think it will be a steep dropoff. Wentz is bigger than Bradford, he has a better arm, and he's far more mobile. That's a good start. The challenge for Wentz will be how quickly he can adapt to the vast difference in the speed of the game between playing at North Dakota State and playing in the NFL.

Certainly, the Eagles also have some major flaws. The wide receiver corps have plenty to prove, as does an offensive line that severely lacks continuity and still faces the likelihood that Lane Johnson will eventually be suspended. Not to mention, the Eagles lack quality depth at most positions.

The 2016 Eagles may not be great, but with Wentz at the helm, they should be fun to watch.

I’m a firm believer in second chances, which is a good thing after those brutal predictions from last year…

Before the Sam Bradford trade, I felt more positive than most about the Eagles. With the addition of Jim Schwartz, they could more or less copy the Andy Reid Chiefs blueprint: Get after the quarterback and play great defense, run the ball like crazy, and employ a quarterback that uses his tight ends and doesn’t make mistakes. In a terrible division, the Birds could’ve definitely made a one or two-game improvement from last year and ended up with eight or nine wins. Not great, but not terrible either.

Now, there’s a rookie who hasn’t played a ton of football under center. Here’s what I think I know: The middle of the schedule is an absolute bloodbath: 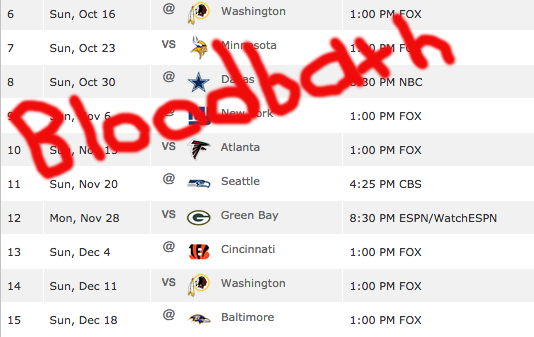 Three divisional road games. At Seattle, Cincy, and Baltimore. Home for Minnesota and Green Bay. If the Eagles could somehow manage 4-6 in that stretch, I would like their chances to clean up at both ends of the schedule and maybe snag the division.

I just don’t see them getting there with Wentz. The Bradford trade was a no-brainer (Wentz gets experience, the team recoups some badly needed draft capital), but for this season, relying on a rookie QB seems like a tall order.

I've already given you the disclaimer that it's nearly impossible to know just how good or bad the Eagles are going to be in 2016. Jimmy broke down both sides of the ball, while Rich focused on the schedule. And I think all of that is equally important when talking about this season.

The first half of the Eagles schedule is much easier than the second half, which is a good thing when you have a rookie quarterback AND a rookie head coach. It'll allow Wentz to get his feet wet before facing some of the best teams in the NFL during the bloodbath portion of the schedule about which you were just warned. But is it better than the alternative?

In terms of wins and losses, it may be. Assuming it takes Wentz a few games to get up to speed - which could mean a loss against a team like the Browns or Bears had the potential to be a win if they'd met later in the season. If you're already chalking the Seahawks and Packers games up to losses, wouldn't it be better to get those out of the way in the early part of the year while Wentz was still adjusting to the NFL game? Again, that's great if you're trying to maximize wins.

But in terms of his development, you don't want your rookie quarterback getting killed out there before he can build any confidence. And the Week 4 Bye could serve as a nice break for the QB to regroup, fix his mistakes and be better prepared when they face the Lions in Week 5. After all, he barely played this preseason.

All that being said, the defense is really what's going to make the difference this season. If they can hold the opposition below 14 points, Wentz and the offense will at least have a chance at winning. Obviously they won't be able to do that every week, but the more often they're able to do so, the more chances the Birds will have to steal a win from a team they have no business beating. It will also help keep the pressure off their rookie and allow Pederson to slow the tempo and perhaps go with a more run-oriented attack. In turn, that would help keep turnovers to a minimum, and if the D can create takeaways anywhere near their preseason rate, it will serve to benefit the offense.

But, man, that schedule is going to be rough.