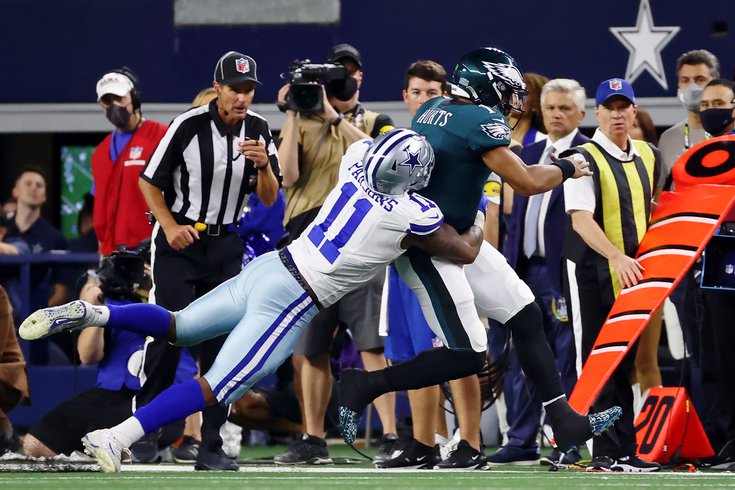 Micah Parsons was an easy choice.

At this point in the offseason, NFL rosters are pretty much set, at least in terms of players expected to make any kind of reasonable impact. And so, let's take a look at the NFC East, and determine who has the best players at each position. Yesterday we started with the offense. Today we'll look at the defense.

Ugh. If you have a beef with my two selections here, I won't put up much of a fight defending them. Lawrence has 14.5 sacks in three years since signing a massive contract, and Young had his 2021 season ended after 9 games with an ACL tear. He only had 1.5 sacks when he went down.

So why choose them? Well, Young's talent is undeniable, so I'll take him on pure potential. Lawrence is one of the game's better edge run defenders, and is still capable of putting up big sack numbers. There just aren't other players in the NFC East who are definitively better. Would you take Haason Reddick over Lawrence, for example? Montez Sweat over Young? I personally would not.

I could have just as easily included Parsons among the edge rushers, but since the NFC East's linebackers aren't exactly awesome, let's put him here.

As for choosing between the rest of this bunch, I guess I'll take Martinez, who tore an ACL early in the season last year after posting at least 144 tackles in each of the four previous seasons. I make this choice with zero conviction, to be clear.

Diggs had 11 INTs in 2021, so he's obviously in, while Slay made huge, game-changing plays in wins over the Broncos and Panthers last season. He also did not allow any monster games to No. 1 receivers whenever he was asked to shadow one.

At slot corner, I'll take Fuller over Avonte Maddox, since Fuller can also play outside.

McKinney quietly had a great season on an awful team. He had 93 tackles, 5 INTs (including a pick-6 in a rare Giants win), and 10 pass breakups.

We'll give two points for first-team nods, one point for second-team. Good? Good. I mean, who cares?

My conclusions? I think the Cowboys are favorites in the NFC East this season, but it's maybe not as clear-cut as many believe. Oh, and the Giants still stink.