Five free agent running backs the Eagles could (should?) sign before training camp 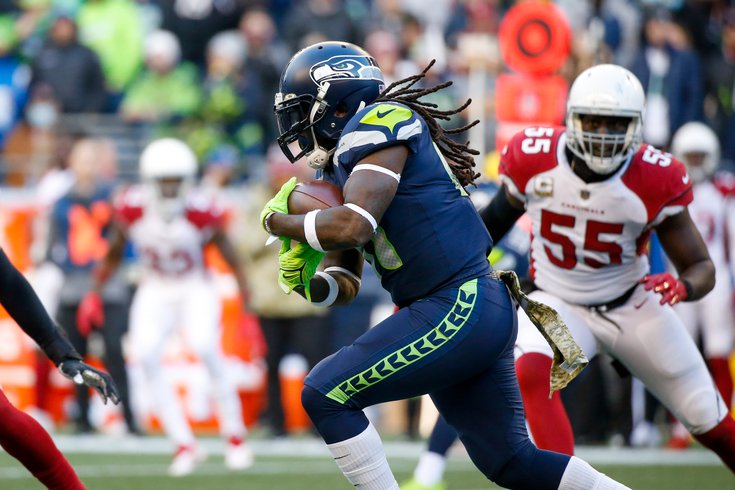 Alex Collins would be a nice addition to the Eagles backfield.

The Eagles had the best rushing offense in football last season, but that was more due to the offensive line than the running backs, which worked by committee all season in tandem with Jalen Hurts, who set several Eagles quarterback records with his legs.

The team will return the same trio of backs in Miles Sanders, Boston Scott and Kenny Gainwell for 2022, but as of right now they lack the bruising downhill goal line type of ball carrier they had (for portions of last season) in Jordan Howard.

Assuming they don't bring Howard back again — which is a big assumption for an Eagles team that has shown it plays favorites with veterans who know the system and will return for cheap — there is a pretty good chance the Eagles use a chunk of the just over $10 million in cap space (according to Over The Cap) they have to ink a fourth running back.

The longer they hold off on adding a running back the more the team might be considering giving Oklahoma undrafted free agent Kennedy Brooks a shot to make the roster as well.

Here's a look at five backs who fit the bill, should the team look to a veteran who could be had for a team friendly deal:

Clement was most recently a Cowboy, but the former Super Bowl hero and South Jersey native is a free agent and seems like a good fit to run alongside two smaller scat backs in Gainwell and Scott. Last year in Dallas he appeared in all 17 games but only got 33 carries and six receptions behind Ezekiel Elliott and Tony Pollard. He'd be available very affordable but his track record (Super Bowl accolades aside) fall short of his counterparts on this list.

Collins had 108 carries in just six starts and 11 total games last season tallying 411 yards and a pair of rushing TDs. But the eye test shows he's the kind of change of pace, short yardage back the Eagles would love to add to their arsenal. The former fifth round pick has scored 18 touchdowns over his five seasons playing in Seattle and Baltimore.

Jackson has been a backup in Los Angeles for four seasons and has had a few singular breakout performances but has just over 1,000 career rushing yards. He does, however, have an average of 5.0 yards per carry, a stat the Eagles will definitely find appealing. He also has 65 career receptions as the seventh round pick has proved to be a multi-faceted NFL player.

Williams has been with the Chiefs his entire NFL career but only got a chance to really show what he could do last season, as injuries propelled him to seven starts. He became fantasy relevant, scoring six touchdowns and rushing for 558 yards when he got a chance to carry the ball, and also caught 47 passes in 2022.

It doesn't get more situational than Brown, who is the longest tenured NFL player on our list having played for the  Rams for six seasons and then Miami last year. He has just five career starts and just 331 career carries (Ezekiel Elliot, by contrast, has had 300+ three times in a single season). However he has scored 12 touchdowns in his limited opportunities and is a veteran leader that could be relied on in an otherwise young RB room.