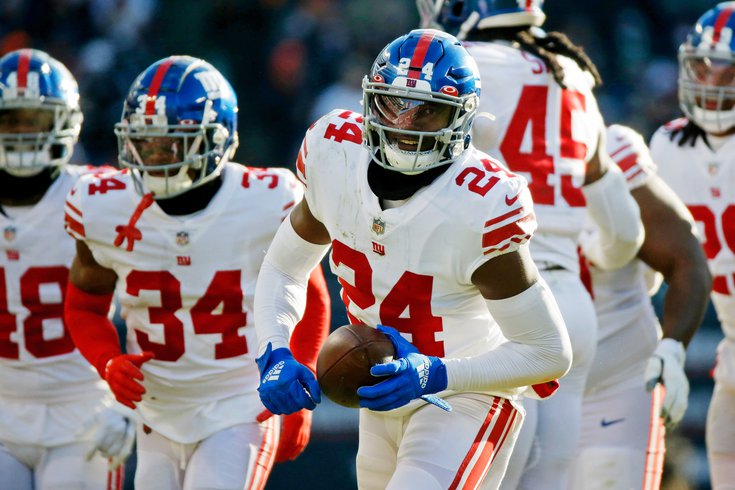 Cornerback James Bradberry was cut by the Giants on Monday.

Veteran cornerback James Bradberry was cut by the Giants on Monday, opening up a chance for the Eagles to immediately improve at the position if they can land him.

Bradberry was entering the final of a three-year deal with New York, and has been one of the team's better — and healthier — defensive players since he signed, but new general manager Joe Schoen was looking to start anew this offseason and clear out his $21.9 million cap hit via trade.

He failed to find a partner, leading to the six-year veteran's release.

Bradberry, 28, spent his first four seasons in Carolina as a regular starter before signing with the Giants ahead of the 2020 season. He started all but one game that year, making three interceptions and earning a Pro Bowl nomination.

Bradberry started 16 games in 2021 and played in all 17 as the Giants went 4-13 for a last-place finish in the NFC East. He grabbed a career-high four interceptions and graded out at 62.8 on Pro Football Focus.

Despite going heavy on defense in the draft, with the selections of defensive tackle Jordan Davis in the first round and then linebacker Nakobe Dean in the third, the Eagles still left themselves pretty thin at corner, especially after Steven Nelson left for Houston in free agency.

Bradberry can offer a boost, and financially, the timing might be perfect for Howie Roseman and co.

From our own Jimmy Kempski:

Yep, Bradberry makes sense for the Eagles. And it’s perfect timing, really, after they didn’t draft a CB high. Cost shouldn’t be out of a control for what would be an upgrade on Steven Nelson, IMO. https://t.co/BkiIBea8YI

He’s kind of screwed because the Giants cut him after FA and after the draft, meaning that teams that may have had interest already filled CB needs. So he’ll have to take a discount. In these cases, the player typically wants a 1-year deal so they can cash in the next offseason. https://t.co/L0X44aKqjD

Darius Slay will continue to hold down the left side heading into 2022, and for right now, second-year defensive back Zech McPhearson is projected to be opposite of him on the Eagles' depth chart.

The 24-year old was picked up by the Eagles in the fourth round of last year's draft and appeared in 16 games on defense and special teams. McPhearson's defensive snap count began increasing in the back half of the season, and in the Week 18 finale against Dallas, he made his first start.