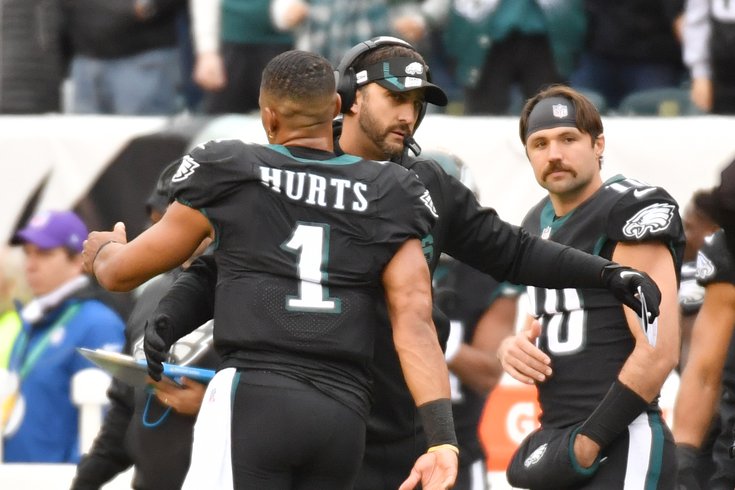 We're only in May and the Philadelphia Eagles have yet to conduct a single practice, so is it a little early to project the their 53-man roster? Eh, each year, I find that the initial look at the 53-man roster is a good indicator of depth, both at the gameday limit, and the 53-man roster limit.

When a team is deep, it's easy to find 53 players to make the roster, and you have to make tough choices on which players to leave off of it. When a team is not so deep, you might get to, say, 48 or 49 players that you think are roster-worthy, and then you struggle to figure out which practice squad-level guys get to make the final 53.

To note, while I believe the Eagles' undrafted free agent class includes a bunch of interesting prospects, I don't currently have any them making the team. I do think there's a chance that two or three of them could eventually land on the final 53, depending on which veteran players get hurt during the preseason and which UDFAs have standout camps.

Minshew has been a subject of trade speculation, but the Eagles should probably just keep him unless some team offers a Day 2 pick for him, which I don't imagine is forthcoming.

The Eagles also have Reid Sinnett, who occupied a roster spot down the stretch last season, and Carson Strong, a Day 2-worthy talent who did not get drafted because of major injury concerns. Strong feels like a candidate for the No. 2 job in 2023, but for now, he makes sense as a well-paid practice squad stash who must show his knee can hold up.

The Eagles lack a bigger between-the-tackles banger like they've had with Jordan Howard the last few years. They could certainly add one before the season begins, whether that's Howard or somebody else. Another candidate for a fourth running back roster spot is undrafted free agent Kennedy Brooks.

A quartet of Smith, Brown, Watkins, and Pascal actually looks pretty good! They're the clear 1-2-3-4 options at wide receiver.

The question is whether the Eagles can sucker some team into giving up anything of value at all for Reagor. There's almost no chance that they would cut him and take the almost $8 million cap hit to do so. Maybe a bust-for-bust trade would make some sense. Back in February, we suggested a swap of Reagor for 2020 Jaguars bust K'Lavon Chaisson, who has two sacks in two years with the Jaguars, for the following reasons:

Boom, get it done, Howie.

Greg Ward could also continue to stick on the roster because he's a high character player who can do a lot of little things, but is a standout at none. That'll be easier to justify if the Eagles can deal Reagor.

Calcaterra is a better receiver than Stoll, and Stoll is a better blocker than Calcaterra. They could perhaps be TE2a and TE2b, in whatever order you prefer.

Tyree Jackson is a player the Eagles would also like to continue to develop, but he's likely to miss most of training camp as he recovers from a torn ACL. Pencil him in for the PUP list.

As for J.J. Arcega-Whiteside's "transition" to tight end, he was pretty much a tight end last year. Credit JJAW for doing anything necessary to help out the team by willingly changing positions, but I'm not buying that this is a career-saving move.

The Eagles might have the best offensive line in the NFL, and beyond their top five guys they're also very deep. It shouldn't be a surprise for them to go heavy here.

Dillard is very clearly available for trade, but the Eagles won't just be giving him away. I think it would take a Day 2 pick in 2023 for them to deal him.

Graham will return from his Achilles tear this season, and the Eagles hope that Sweat can continue to improve as a pass rusher. Barnett had a dreadful 2021 season, but he returns, because 🤷‍♂️. Jackson appeared in every game in 2021, playing 253 snaps during the regular season, and 15 snaps in the playoffs.

This was the biggest need that was not addressed in the draft, in my opinion, even beyond CB2.

Also, there's a lack of clarity on what the Eagles' defense will look like in 2022. They'll mix up their looks, I imagine, but will they be shifting to more odd-man fronts? If so, where we place the Eagles' defensive linemen might change a bit, even if the players likely to make the team don't.

The decision to bring Cox back at $14 million instead of spending that money elsewhere was a ridiculous decision in an otherwise strong offseason by Howie Roseman. If you can look beyond that poor allocation of resources, the Eagles do at least have an outstanding quartet of defensive tackles in Hargrave, Cox, Davis, and Williams, even if they're overpaying for that group.

Tuipulotu could be pushed by undrafted Idaho DT Noah Elliss.

Reddick will give the Eagles some extra juice as a pass rusher. We'll list him here with the SAM linebackers, and while he may drop into coverage on some rare occasions, make no mistake — the Eagles paid him to get to the quarterback.

Will the Eagles only keep a single dose of Johnson and Johnson, or can they keep both? For now, we'll guess that both Johnsons stick.

It feels like the Eagles will add a veteran cornerback at some point, and there are still plenty of one-year Band-Aid options available. One name to keep an eye on is James Bradberry, should the Giants release him.

So are the Eagles just not going to add a punter and run it back with Siposs?