Projecting what the Eagles' free agents will make in free agency, and their compensatory pick values 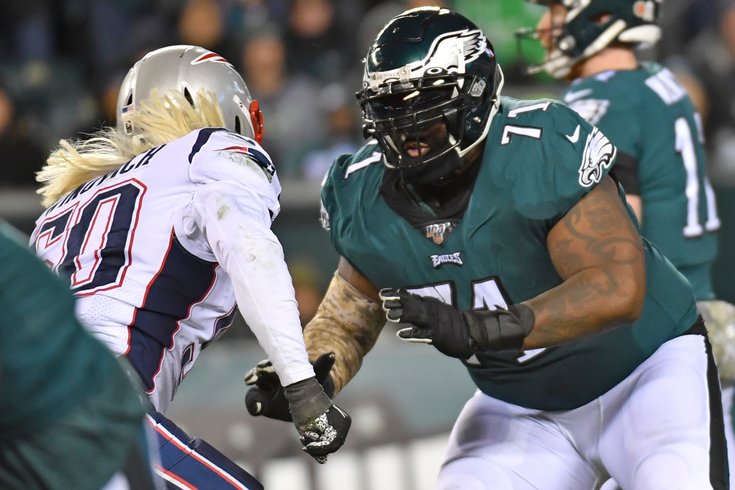 Jason Peters should get some free agent attention from title-contending teams in need of a starting LT, you know, assuming the Eagles have any faith in 2019 first-round pick Andre Dillard.

While Howie Roseman and the Philadelphia Eagles had compensatory picks on the brain last offseason, they are highly unlikely to factor them in when making roster decisions in 2020.

Around this time in 2019, the Eagles were set to lose four, maybe five players who seemed likely to count toward the compensatory pick formula at a high level, thus resulting in the Eagles being rewarded with additional mid-round draft picks as a result. Those players were Nick Foles, Golden Tate, Jordan Hicks, Ronald Darby, and maybe Brandon Graham.

Graham signed with the Eagles prior to free agency, while Foles, Tate, Hicks all found good deals on the open market, and are projected to earn the Eagles third-, fourth-, and fourth-round compensatory picks, respectively, in the 2020 NFL Draft. Of course, the league rightfully did not value Darby, and he returned to the Eagles on a one-year deal.

Because the Eagles were in line to receive those valuable picks in return for their losses, they were careful not to have them canceled out by free agents gained, even going so far as to release comp pick formula-qualifying players like L.J. Fort and Andrew Sendejo, who would have each canceled out an incoming comp pick had they stayed on the Eagles' roster for 10 or more games.

In 2020, the Eagles don't have any outgoing players likely to get deals on the open market big enough to warrant punting on free agency in order try to accumulate third- or fourth-round comp picks. They are almost sure to be aggressive in free agency, and likely to sign costly players, particularly at wide receiver and cornerback.

That said, the Eagles could still lose more free agents than they gain, which could result in some lower level comp picks in 2021.

Last year, we predicted what the Eagles' free agents would make on the open market:

Self-scouting: Nailed Foles and Tate, close on Graham, wrong on Darby, and was surprised the injury-prone Hicks got a long-term deal with good guarantees, but that move has worked out nicely for the Cardinals.

Anyway, here's what we predict the Eagles' 2020 free agents will find on the open market:

While the deep ball will always be a concern with Mills, he has become a good corner in the red zone, and is a physical contributor against the run. In my view, Mills is a solid "No. 2" type of corner, but because he is the best the Eagles have had, he has been put in positions in which he hasn't gotten as much help on the back end as he should be getting. If he were to be paired with a legitimate "No. 1" type of corner, which might allow for easier assignments, the narrative on Mills might be a lot different.

Mills will be an unrestricted free agent this offseason. No matter how you or I might view him, there's no debate on how Jim Schwartz views him, and I can't imagine some other team out there valuing Mills more than the Eagles.

Could Agholor be the prize of the Eagles' outgoing free agent class? In terms of open market earnings, he might! The guess here is that Agholor will view his dreadful 2019 season that was cut short by injury as one that he can improve upon in 2020, and will want to play on a one-year deal with the hope of boosting his earning power in 2021 free agency.

Someone will see his ability and think they can fix his confidence and mental-lapse issues.

#JimmyGuess: 1 year, $7 million. Will count toward the comp pick formula at the fifth-round pick level.

Peters still played well as the Eagles' starting LT in 2019, but the Eagles should probably move on from him this offseason if they believe in 2019 first-round pick Andre Dillard. Peters would make sense for a title-contending team with a hole specifically at LT, and his $6 million earnings in 2019 would probably serve as a good guideline for his expected pay in 2020, though I think he'll actually get a slight bump if there's competition for his services.

#JimmyGuess: 1 year, $7 million. Will count toward the comp pick formula at the fifth-round pick level.

Vaitai has been a valuable reserve player (and frequent starter out of necessity) for the Eagles over the last four years, but I wonder if many teams will view him as a full-time starter. Still, he may get paid by a team that views his floor as a good swing tackle, who could also start in the short term while they continue to look for a long-term answer at tackle.

#JimmyGuess: 3 years, $18 million. Will count toward the comp pick formula at the sixth-round pick level.

One more year removed from an ACL tear, some team with ample cap space could value Darby's speed and take a one-year flyer on him.

#JimmyGuess: 1 year, $5.5 million. Will count toward the comp pick formula at the sixth-round pick level.

I believe the wide perception is that McLeod had a decent season in 2019. I would respectfully disagree, and in a good safety free agent class, I don't think McLeod will find big money on the open market like he did in 2016 with the Eagles.

#JimmyGuess: 1 year, $5 million. Will count toward the comp pick formula at the sixth-round pick level.

I struggled with Sudfeld's value more than any other player on this list. While I do believe the Eagles when they say that they view him as a No. 2 quarterback (even though Josh McCown leapfrogged him on the depth chart), it's hard to imagine Sud will cost all that much to retain because of how little he has played. If we are to believe the Eagles, Sud can only reasonably be viewed as a legitimate No. 2 quarterback in Philly, right? Maybe Indy (Frank Reich) or Chicago (John DeFilippo)?

I think the Eagles will be willing to give him a slight raise from his $3 million RFA tender of a year ago, but will require him to sign for two years.

Yes, Howard has racked up a boatload of rushing yards in his four years in the league, but I think his value was revealed when the Bears traded him to the Eagles for a sixth-round pick. Since then, potential suitors now have to also worry about potential nerve damage in his shoulder.

Howard's situation reminds me a little of Alfred Morris', who was a late-round pick who ran for 4713 yards in his first four years in the league, but didn't find attractive offers on the open market after his rookie contract expired.

After a great start to camp, Kamu injured his MCL, missed a few games, saw his snap counts rise and subsequently fall, before eventually landing on IR, which became something of a point of contention between the Eagles and Kamu's agent.

I think some team will make him a priority special teamer addition, who still has some upside as a linebacker.

#JimmyGuess: 1 year, $3 million. Will count toward the comp pick formula at the seventh-round pick level.

Jernigan played well in the final few games, but was invisible for the better part of the season. He has been too injury-prone and erratic for the Eagles to continue to count on, but some other team might see the upside and take a low-cost flyer.

#JimmyGuess: 1 year, $2 million. Will count toward the comp pick formula at the seventh-round pick level.

Note: The Eagles also have a club option on Nigel Bradham. If they do not exercise that, he will become an unrestricted free agent as well.