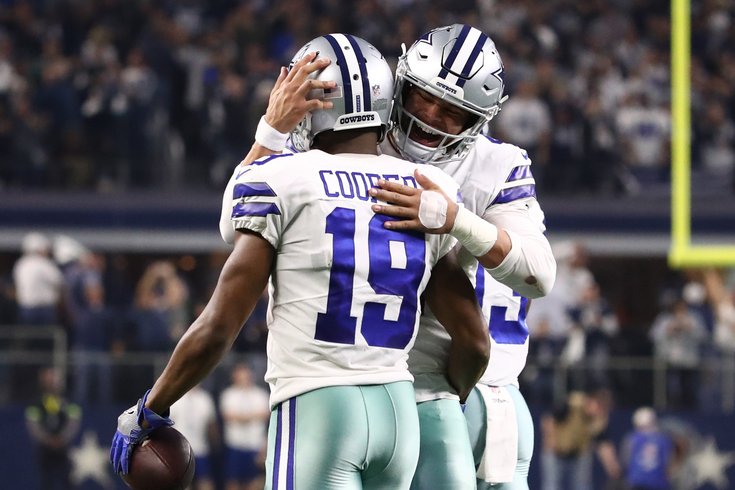 The Philadelphia Eagles have their biggest offseason in three years on the horizon, and in the NFC East, they're not alone, as the New York Giants, the Washington team, and most of all, the Dallas Cowboys, all have critical decisions to make over the next few months.

The Giants don't have much in the way of potential outgoing free agents, because, well, they don't have much talent on their roster. They do have a pair of pass rushers who could get paid this offseason.

• DL Leonard Williams: After consecutive losses to the Cardinals and Lions in October, the Giants were 2-6, and their season was basically over. So what did Dave Gettleman do? He traded a third-round pick (which is now the 68th overall pick) in 2020 and a fifth-round pick in 2021 to the Jets for Williams, essentially for 8 games. Lol.

Williams reportedly thinks of himself as a top-tier interior defensive lineman, and wants to be paid as such. Seeing as the Giants already gave up a top-70 pick for him, Gettleman is going to feel like he absolutely has to get a deal done with him, or face the obvious and inevitable criticism coming his way if he doesn't, which of course gives Williams leverage to ask for far more than what he is actually worth.

• OLB Markus Golden: Golden's signing to a one-year "prove it" deal was a rare 2019 offseason move that made sense for the Giants, and he quietly had a productive 2019 season, racking up 72 tackles, 10 sacks, 13 tackles for loss, and 27 hits on the quarterback. In 2019, after hitting sack incentives, Golden made $4,750,000. He's getting a raise, whether that be in New Jersey, or elsewhere.

• RG Brandon Scherff: Scherff (28) is a three-time Pro Bowl RG who will likely be looking to beat the four-year, $56,350,000 deal signed by Brandon Brooks (30) during the 2019 season. If Washington cannot work out a long-term deal with Scherff, they have the franchise tag at their disposal, and in my opinion, would be crazy to let him walk in free agency.

• RB Adrian Peterson (club option): Peterson was OK in 2019 (great for a 34 year old), when he averaged 4.3 yards per carry. With Derrius Guice's career in serious question after multiple crushing knee injuries, AP could be back yet again. If Washington picks up his option in 2020, AP will count for $3.1 million on the cap, per John Keim of ESPN. It feels likely that they'll pick that up.

• RB Chris Thompson: Thompson is a very good role player as a receiving threat out of the backfield, but he has been unable to stay healthy.

• LG Ereck Flowers: Flowers started all 16 games in 2019, and wasn't awful. He likely earned a raise.

• QBs Case Keenum and Colt McCoy: With Dwayne Haskins likely to be the starter in 2020, and a possible return of Alex Smith, both of these guys could be goners.

• LT Donald Penn: Washington signed Penn to start at LT with Trent Williams deciding not to play in 2019. New head coach Ron Rivera has reportedly made some headway in communicating with Williams, in attempts to get him to come back to the team. If successful, Penn will almost certainly be gone.

The Cowboys have a slew of highly attractive free agents, as well as important role players who are set to hit the open market. They are going to have perhaps the most interesting offseason in the NFL.

• QB Dak Prescott: The deadline to franchise tag players is March 10, and the Cowboys reportedly want to sign Prescott to a long-term deal before that occurs.

The #Cowboys are going to try to buck history, attempting to get a deal done with QB Dak Prescott by the close of the franchise tag window on March 10. A lot will have to happen for a deal to come together. pic.twitter.com/Csl9LVvvB9

Duh. Of course they do! If they can, then they can apply the tag to, sayyyy, Amari Cooper instead.

Then again, the Cowboys should have also probably done a better job getting a deal done with Prescott in good faith prior to the 2019 season, instead of attempting nonsense ploys, such as publicly stating that Prescott should take less money to help the team because the Cowboys' brand will help his endorsement earning power, lol.

Should Prescott get tagged, David Moore of the Dallas Morning News laid out the three scenarios for Prescott and the Cowboys:

Options No. 2 and No. 3 are bad for the Cowboys, and No. 1 would be incredibly wishful thinking.

• WR Amari Cooper: The Cowboys traded a first-round pick for Cooper, as you all remember, and to date, he has only played 27 games for them. In those 27 games he has an impressive 145 catches for 2085 yards and 15 TDs.

In 2018, his arrival sparked a stagnant Dallas offense, leading them to an NFC East title. In 2019, Cooper was great through the team's first 9 games, but as an assortment of injuries mounted, Cooper was not the same player, and as a result, the Cowboys' offense wasn't as potent.

Should Cooper walk in free agency, that would be an an extremely bitter pill for the Cowboys to swallow. If he returns, there's a good bet he'll make close to $20 million per season on a new deal.

• CB Byron Jones: With Prescott and Cooper being higher priorities, Jones will almost certainly be able to test the open market in free agency, and if he does, as is expected, he'll be the top cornerback available. We covered Jones in more depth a few weeks ago, but the Cliff's Notes version is that he's an extremely athletic player, and a solid corner in all aspects, but lacks splash plays.

• DE Robert Quinn: Quinn led the team with 11.5 sacks and 22 QB hits, and he's only the fourth-most attractive free agent the Cowboys have.

• DT Maliek Collins: Decent young defensive tackle who started all 16 games in 2019. He'll get some interest around the league.

• LB Sean Lee: Lee was a great player when healthy, but he was rarely healthy. He'll likely move on with Leighton Vander Esch and Jaylon Smith starting at LB.