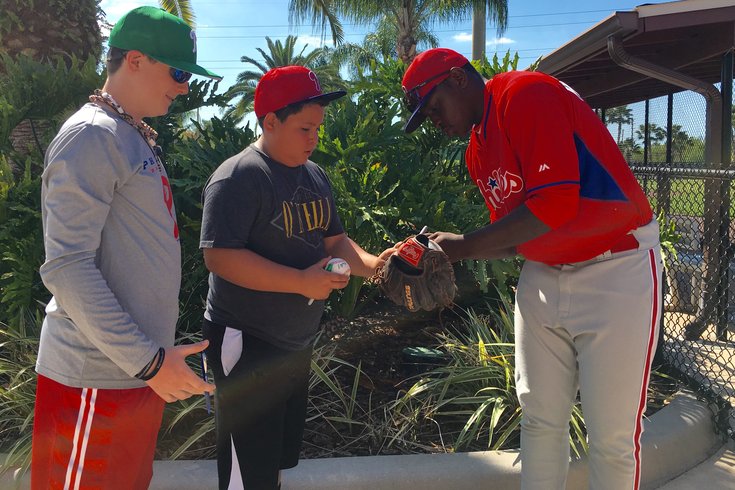 Cornelius Randolph signs an autograph for a Phillies fan last week in Clearwater.

CLEARWATER, Fla. – Cornelius Randolph was a budding baseball prospect, projected to be selected at some point in the first round of the major league draft, but he was also still taking classes at Griffin High School in Georgia.

He was still weeks away from his 18th birthday.

He was a kid with a good family, but, other than the area scouts, agents, and college coaches in constant contact, he was also a kid with little real-world baseball experience. It was about that time that he got a little help from a stranger who would eventually become a mentor (and likely future teammate).

“I followed him and he ended up following me back,” said Randolph, who then sent the Phillies prospect a direct message. “He said if there was anything he could do to help, just ask him.”

Randolph, the talented left-handed hitting prospect who could begin his first full season in the Phillies system at Low-A Lakewood next week, was asked if there was one person in the 10 months since he was drafted that he would consider the most helpful and most influential in his early development. It took him about a half second to answer the question.

When Randolph was in a funk, trying to get comfortable against left-handed pitchers last summer, he messaged Crawford for advice. Crawford quickly responded.

“He’s helped me out a lot,” said Randolph, who was rated the 88th best prospect in baseball by Baseball America this winter (and one of just five players under 19-years old on BA's list).

Crawford, the Phillies' top prospect and also considered one of the best prospects in all of baseball, is surely flattered. It turns out, though, that in reaching out to Randolph – before the draft, before he knew Randolph would be joining him in the Phillies farm system – Crawford was simply paying it forward.

When Crawford was in the same position two years earlier, Shane Watson guided him through the process through texts and phone calls. Watson, the Phillies' top pick in the 2012 draft, was a former teammate of Crawford’s: he year ahead of Crawford at Lakewood High in Southern California.

Crawford, meanwhile, didn’t know Randolph. He didn’t grow up in the same town of Griffin, Ga., about 40 miles south of Atlanta. But he forged a bond anyway in an effort to help if help was needed.

“I thought I'd help him out like (Watson) helped me,” Crawford said of Randolph, the eventual, 10th overall pick in last June's draft. “I wanted to give him some advice before hand just so he knows what the deal is when he gets here.”

Since he went through his own pre- and post-draft process and entrance into professional baseball as a teenager, Crawford has quickly worked his way onto the major league radar. He is among the group of Phillies prospects who will play in a pair of games (tonight in Reading, on Saturday afternoon at Citizens Bank Park) against the major league team in the inaugural Futures Series.

The best of the organization's upper-level prospects will play, from outfielders Roman Quinn and Nick Williams, catchers Andrew Knapp and Jorge Alfaro, and pitchers Jake Thompson and Zach Eflin. Of the deep crop of prospects in the Phillies system, the 21-year-old Crawford, who could begin the 2016 season at Double-A but work his way into a quick promotion at Triple-A Lehigh Valley, is the one many expect to lead the team when it’s time to contend again.

But if Crawford turns into the next Jimmy Rollins – a slick-fielding shortstop will an all-around game and a knack for igniting a team when needed – he’s going to need a supporting cast. He’s going to need his Chase Utley and Ryan Howard and Cole Hamels.

Although they haven’t shared a field yet, the Carpenter Complex in Clearwater allows everyone in the organization to see anyone and everyone in March. Crawford likes what he sees in Randolph.

“He’s competitive on the field,” Crawford said. “The guy can flat out hit. He's just a baseball guy doing what he loves to do and he's doing a good job of doing it.”

Randolph will not play in this week’s Futures Series.

Again, he’s a teenager and just a year removed from facing high school pitching, with what could be an already-challenging task of a spring in the Sally League on his itinerary. Perhaps next year for the Future Series.

He was shortstop in high school and then immediately shifted to left field after he signed with the Phillies. The organization loves his bat and clearly wants him to continue developing it. The outfield is still new, but the nine months he’s had to work at it has helped him become more comfortable, too.

“It was kind of weird last summer, but now it feels normal,” said Randolph, who never played an inning of outfield in high school or as a youth. “I’m progressing. The throws are getting better, the routes are getting a lot better. It’s just becoming easier.”

Offense appeared to come easy to Randolph right away upon graduating high school and jumping into the Phils system last summer.

Randolph’s goals for the upcoming season are simple. It’s not about where he begins or where he finishes, whether he earns a late-summer promotion or not, but about continue to hone his craft as a hitter.

“Just put together a lot of good at-bats and play hard everyday,” he said. “I don’t really try to do too much.”

If he sticks to that plan, and realizes the talent that made him a top-10 pick last summer, Randolph could one day graduate to the big leagues, where he might be able to jump into a lineup with Crawford and Quinn, Alfaro, Williams and Maikel Franco.

But let’s not get ahead of ourselves. He’s still more than two months away from his 19th birthday.

He’s still learning the game and thankful for the advice Crawford gave him before they were wearing the same spring training uniform this month.

“I told him to handle his business on and off the field, stay out of trouble,” Crawford recalled. “Don't try and change anything up. The guy’s got a bright future ahead of him.”