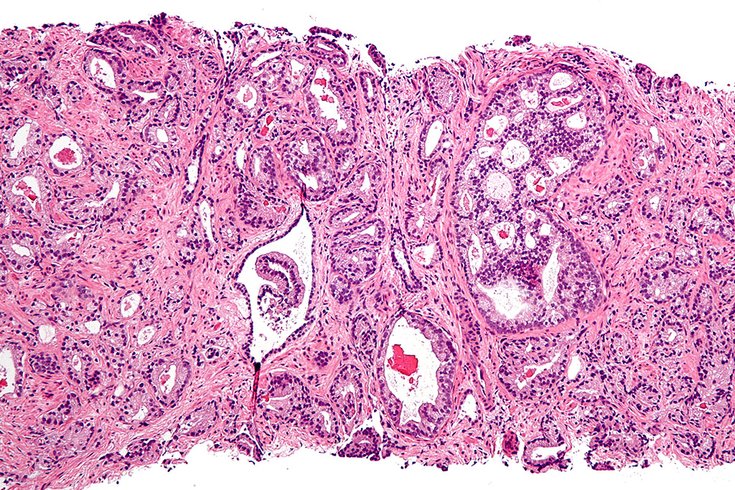 Micrograph of prostate adenocarcinoma, acinar type, the most common type of prostate cancer.

A new blood test can accurately detect aggressive forms of prostate cancer and may help men avoid unnecessary biopsies, according to researchers at Queen Mary University of London.

The current screening method measures the level of prostate specific antigen – a substance produced by the prostate – in the blood. Men with elevated PSA levels must then undergo a tissue biopsy to determine whether they have prostate cancer.

Though PSA levels can be higher in men who have prostate cancer, other factors can spike PSA levels. That results in a high number of false positives, researchers said.

The new test detects early cancer cells that have left the original tumor and entered the bloodstream. Researchers found the presence of those cells – known as circulating tumor cells – were indicative of aggressive prostate cancer.

When coupled with the PSA screening, doctors were able to predict the presence of prostate cancer in subsequent biopsies with 90 percent accuracy. The researchers also found that the number and type of CTC cells correlate to the aggressiveness of the cancer.

"The current prostate cancer test often leads to unnecessary invasive biopsies and over-diagnosis and overtreatment of many men, causing significant harm to patients and a waste of valuable health care resources," lead researcher Yong-Jie Lu said in a statement. "There is clearly a need for better selection of patients to undergo the biopsy procedure."

As part of their study, researchers used the new test on 98 pre-biopsy patients and 155 newly-diagnosed patients enrolled at St. Bartholomew's Hospital in London. Their findings were published in the Journal of Urology.

Researchers said additional studies are needed to validate their findings. Approval by the U.S. Food and Drug Administration could take three to five years.