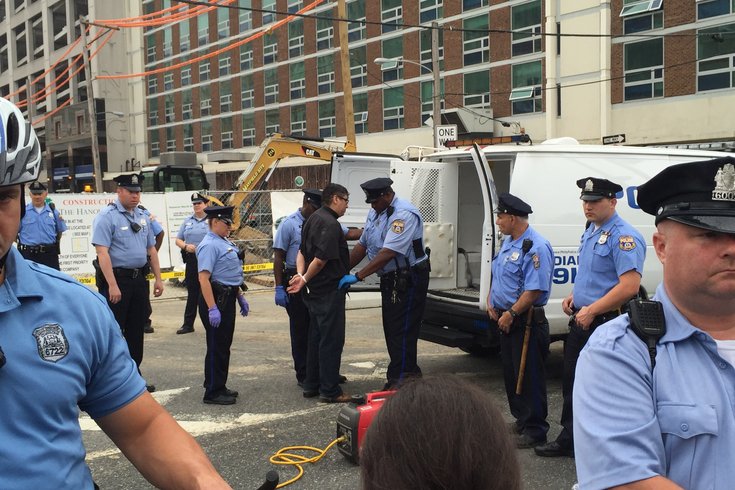 Reverend Adan A. Mairena, pastor of the West Kensington Ministry at Norris Square, was arrested Tuesday for his role in a protest that blocked traffic on the 15th Street off-ramp of I-676.

At least four people – three adults and a 13-year-old boy – were arrested on Tuesday during a sit-in protest, after locking their arms together and blocking traffic in Center City Philadelphia for several hours.

The protest, held in response to the U.S. Supreme Court's June 23 immigration ruling, called for an end to all deportation in America. About 50 protesters gathered on the 15th Street off-ramp of I-676, where several members sat and blocked traffic from about 11 a.m. to 12:30 p.m.

The Supreme Court deadlocked, 4-4, on a case that would have expanded the country's Deferred Action for Childhood Arrivals and started a Deferred Action for Parents of Americans, programs that would have allowed undocumented parents of American citizens to gain work permits to stay in the country and avoid deportation. The judgment effectively kept millions of undocumented immigrants in the United States under the threat of deportation. 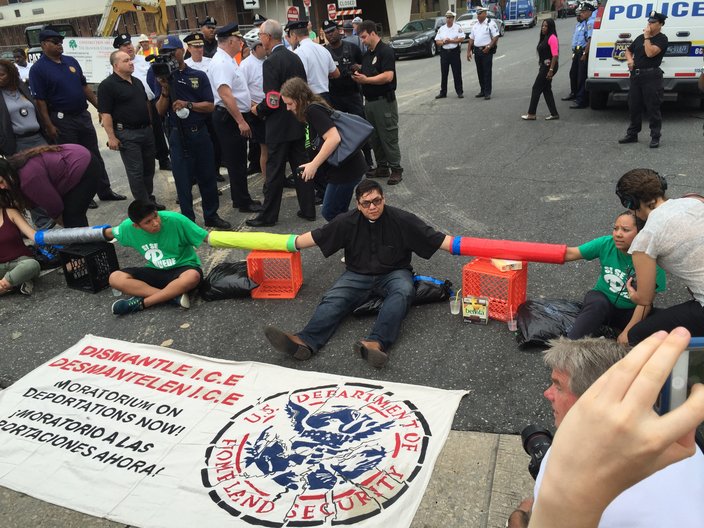 Protestors block the 15th Street off-ramp of I-676 on Tuesday during a protest calling for an end to deportation in America.

According to organizer Erica Almiron, protesters wanted to express their frustration with the high court's decision.

"They have just been raiding our families and the Supreme Court can't help us," she said.

After watching the protesters occupy the roadway for some time, Philadelphia police officers used a power saw to cut the handcuffs – covered in pipes placed over their hands – as they sat hand-in-hand on the off-ramp.

According to Almiron, those arrested included the Rev. Adan A. Mairena, pastor of the West Kensington Ministry at Norris Square, Adrianna Berring, a 19-year-old Swarthmore student from Tucson, Arizona, Lluli Pilar, an undocumented mother with a daughter who was born as an American citizen, and 13-year-old Erick Perez-Hernandez, of South Philadelphia. 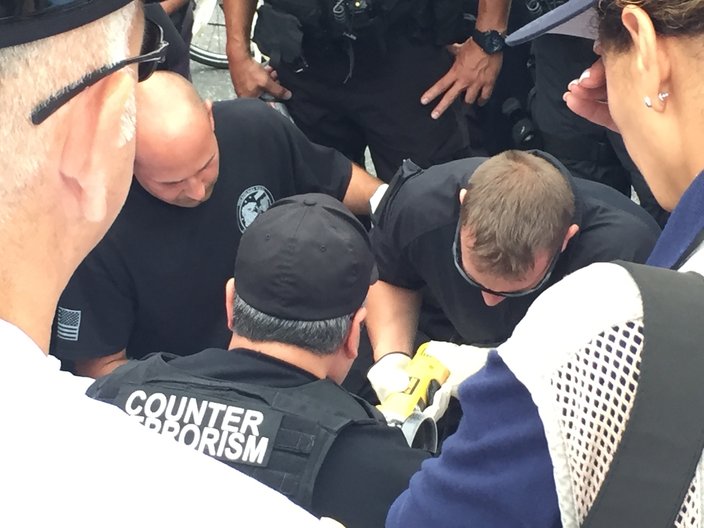 Police officers use a power tool to cut the bonds that protestors wore when they sat together to block the 15th Street off ramp of I-676.

Officer Tanya Little, a Philadelphia police spokeswoman, said another adult male may have been arrested Tuesday, but she was not ready to discuss the fifth arrest and said she was working with "preliminary" information.

No charges have yet been announced for any of those arrested, she said.

According to Maria Hernandez, mother of Erick Perez-Hernandez, the juvenile arrested, her son felt strongly that the Supreme Court erred in its recent decision.

"He was arrested, but he was leaving with pride, because he was in front of all of us," she said. "I'm proud of him."

Though she cried as her son was taken away in handcuffs, Hernandez said that she was shedding tears of pride, as her son was standing up to deportation, a practice that has broken up so many Mexican families, like hers.

"These are tears of pride and bravery," she said. "We are sick of discrimination... We are facing discrimination at the schools, on the streets, when we are at work and we are just sick of all this discrimination."