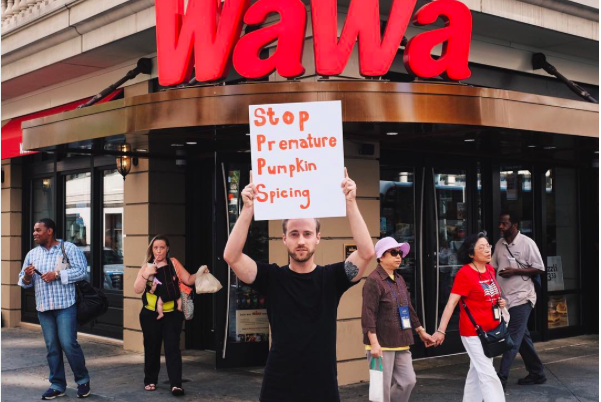 The 2016 'Stop Premature Pumpkin Spice' effort started outside the Wawa at Broad and Walnut streets in Center City in late August.

If the Weather Channel’s website is to be believed — and who are we to say it isn’t? — it felt like 96 degrees in Philly around noon on Monday. It’s the type of weather in which people wear shorts. Fall doesn’t officially begin for 25 days.

Enter Sean Bauer who has, for the past two years, taken his “Stop Premature Pumpkin Spicing” mission to the doorsteps of a pair of pre-eminent pumpkin-beverage peddlers locally: Wawa and Starbucks.

At each, Bauer has posed with signage emblematic of his stance. Last year, he stood before the Starbucks at 13th and Chestnut streets and this week, he was outside the newish Wawa at Broad and Walnut streets.

While Starbucks’ Pumpkin Spice Latte is still teasing fans and foes via its personal Twitter account, both Dunkin Donuts and Wawa are already slinging their squash-plant juice.

Anti-pumpkin images posted by Bauer and his friend/co-worker Billy Cress have been killing it on Instagram and Reddit, which is part of the plan.

“I always see people talking about the drama surround this pumpkin-spice thing. When some people think about fall, they think of horrible artificial taste. We don’t see it that way,” Bauer confided to PhillyVoice on Monday afternoon. “When I think about fall, I’m picturing myself wearing a flannel shirt, drinking something like apple cider, not a sugary, fake nutmeg taste.”

For this year’s photo — which went live on Saturday and already has more than 2,200 Instagram likes — the duo merely walked 0.2 miles from their workplace at Quaker City Mercantile to the nearest Wawa location.

"This is an issue no political candidate has been talking about this summer," Cress noted. "That's why when Sean asked me to join the fight against this epidemic, I was immediately on board. Join the movement."

Bauer was happy his co-worker enlisted. “It was awesome. People were walking by and laughing along,” he said. “Billy and I even went inside with the sign.”

They even sampled the spiced object of their scorn during their visit. “It was not that great,” says Bauer. He likes his cocktails and beer bitter, but conceded he’s already thrown back New Belgium’s seasonal Pumpkick Ale, and it was quite good. Rather than getting into a verbal altercation at the flagship Wawa like FoxNews host Sean Hannity allegedly did during July’s Democratic National Convention, they came and went peacefully.

Asked what he considers the proper time for pumpkin-flavored refreshments, Bauer said “I would say mid-September. It’s that whole ‘Stockholm Syndrome thing.’ People wouldn’t care about purchasing it if it was available year-round."

(Counterpoint: People would care each and every time they ordered a McRib if it was available year-round.)

Their 2016 campaign will not end with this weekend’s photo shoot. Bauer's planning on heading over to Reading Terminal Market to get his hands on a real pumpkin as soon as Monday afternoon and has “a few more pumpkin-themed things to up the drama" (and maybe turn virality into profits!).

Anyway, I’m on their side. Maybe you aren’t. Feel free to fight it out amongst yourselves in the comments if you’re so inclined. Just keep it classy. After all, we’re just talking about coffee here.