The city lags behind Austin, D.C. on the issue 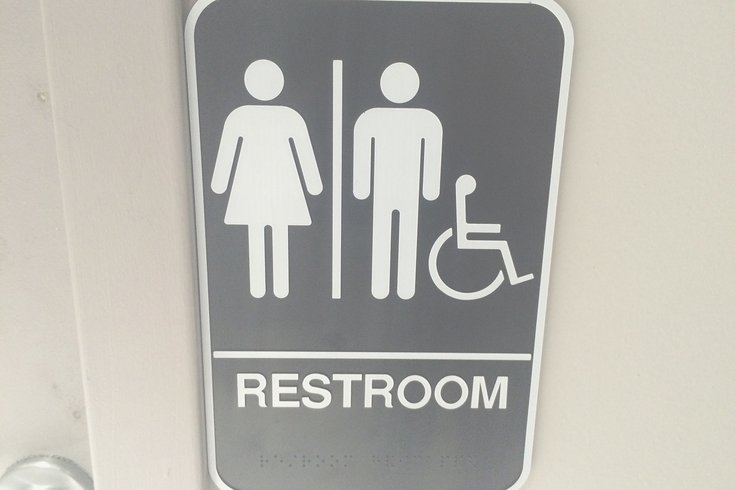 In Philadelphia, only city-owned properties are required to have single-stall, gender-neutral restrooms.

In 2009, Ash Yezuita, a wide-eyed, gender-queer suburban transplant enamored with her newfound multicultural surroundings, adored being a student at Temple. With two queer-oriented student groups and a tight network of LGBT friends, Temple -- Philadelphia, really -- was her safe haven.

Then a fellow student called her a "f-----" in the men's room, and that all changed.

"I was in a bubble, and I didn't expect it -- it tossed me into the real world," Yezuita told PhillyVoice.

Already frustrated by how seemingly underserved the trans community was on her campus, the lightbulb lit up, and she began to champion the issue of gender-neutral restrooms on campus.

"It became clear to me that as much as gender-neutral bathrooms isn't the most pressing thing -- health care and transition costs are all probably more important -- it was one of those touchpoint items that I relate to gay marriage. ... It doesn't [negatively] affect anyone, and it shouldn't even be an issue."

In Philadelphia, only city-owned properties are required to have single-stall, gender-neutral restrooms. That means that bars and restaurants are able to mark single-stall restrooms as strictly for "Men" or "Women," a source of discomfort for trans people and an inconvenience for everyone else who has to wait in line at a packed bar for a single-stall men's room when the women's stall is empty.

Yezuita started a petition in November 2009 that, in a demonstration of just how unaffected everyone else would be, included signatures from all of university Greek life and roughly 10 percent of the total student body. Temple University responded to the petition and changed its policy to include gender-neutral restrooms in all future construction. The university now keeps a record of which restrooms are gender-neutral; the University of Pennsylvania does the same and has even retrofitted some.

But six years later, access to gender-neutral restrooms in Philadelphia -- a city commonly celebrated for its trans-inclusiveness -- remains limited. With Bruce Jenner coming out and the spotlight on the trans community, now might be just the time for another push -- this time on a citywide scale.

"For a long time, people haven't been listening," Yezuita said. "Now, they're forced to listen and realize, 'Maybe this hits closer to home than expected.'"

Growing up Catholic in Northeast Philadelphia, Caleb Essenthier, then a woman, was made acutely aware that not following gender roles was akin to "spitting in the eye of God."

By the time he was 17, though, he'd shed his insecurities and become more comfortable dressing in masculine clothing -- presenting himself as "butch," by his own account. But from that moment onward, restrooms suddenly became a conscious decision he dealt with every day.

Having been faced with both men's and women's restrooms in Philly and elsewhere, he said the women's room was what unsettled him most.

"I've experienced most of my difficulties in the women's room," he told PhillyVoice. "It was a hostile place for me to be. A lot of people were concerned for their children -- people would worry about their kids seeing a trans person in the bathroom. They'd rather I get a bladder infection than let their kid know I exist."

By the time he began transitioning into a male in February 2012, Essenthier began veering into the men's restrooms instead. Here, he said, he faced altogether different territory -- turf with seldom-verbalized rules about interaction.

"It's intimidating in a different way," he explained. "There's something unspoken there that says, 'Don't talk to me while you're touching your d---.' Men don't want other men to even think that you're thinking about them, so they don't acknowledge you. But on a rare occasion, they look up and 'clock me' in a confrontational way. ... Men will make you feel more physically unsafe."

What's most anxiety-inducing, he said, is any layout with only one urinal and one stall -- particularly because he can only use devices that require him to sit while urinating.

"[Men] will wait to see why you're using the stall and not the urinal, and it becomes uncomfortable very quickly," he said. "The best scenario is when I go into a men's room that's full of stalls."

He said it's not uncommon for him to ask bar staff whether the restrooms are friendly for trans people, citing Kung Fu Necktie's "Balls" and "Boobs" bathroom gender division as an example of what's off-putting for a trans person.

For Essenthier, it's ultimately as simple as not wanting to have to think so hard about a basic need. Moreover, he expressed sadness that his partner "visibly relaxes" every time he comes safely out of a restroom.

While he acknowledged that requiring single-stall restrooms to be gender-neutral would only relieve some of his safety fears, he sees it as a long overdue no-brainer for a city that otherwise gets top marks in the trans community.

"Outside of the restroom situation, Philly is one of the best places in this country to transition," he said, pointing to resources like the Mazzoni Center and GALAEI. "So it's odd that we're still fighting to use public restrooms safely."

Gender-neutral restrooms have only recently surfaced as a a point of discussion in state legislatures and city halls across the country. Washington, D.C. led the way in 2006 with an all-encompassing nondiscrimination bill that contained a ride-along mandate for businesses in the city to mark existing single-stall restrooms as usable by all genders and required new construction to also include them. West Hollywood and Austin have followed suit in recent years -- largely in an attempt to be accommodating to non-gender-conforming people, but also to be sensitive to caretakers of the opposite sex and parents with children. (Many advocates are careful to note that it's not just a trans issue.)

On the state level, Pennsylvania law still speaks in terms of the male-female gender binary, and it's illegal for trans individuals to choose their restroom based on identity.

Psychoanalyst Patricia Gherovici, who treats a number of trans individuals as part of her Center City practice and has researched what she and other academics term "urinary segregation," told PhillyVoice that some of her patients do not subscribe to either gender ("genderqueer"), making bathroom-choosing (assuming you have the luxury) an altogether uncomfortable and mentally anguishing decision to make -- especially when waiting in line with a gender-normative crowd who may gawk.

"Every time you use a restroom, you're forced to make a gender decision -- a person subscribes to the world of men or women. But it's not something that’s easy for everyone," she said. "For folks who express their gender in non-normative ways, the choice of a public restroom could go from being a source of anxiety to creating a dangerous situation."

In Philadelphia, it's been legal for trans people to choose their restroom based on gender identity since 2001. Still, that law has more to do with identity-affirmation than it does safety.

On the whole, the city's record on gender-neutral restrooms is progressive but imperfect. Former Councilman Jim Kenney spearheaded an LGBT rights bill in 2013 that -- while monumental -- declared a premature, easily misconstrued victory for gender-neutral restrooms. The general consensus, with declarative headlines like "Gender-Neutral Restrooms Become the Law," was that Philadelphia had joined the ranks of cities like Washington, D.C.

It's worth asking: How much of a victory really is it to be able to pee in a city-owned toilet?

It's an issue she hopes to resolve with the launch of "Philly Gotta Go Guide," a mobile app and website that aggregates public and commercial spaces in Philadelphia that have gender-neutral restrooms.

Is it enough to make up for not having a law, though? Not exactly.

"You have to have a statute regulating this stuff because people won't just do it on their own," Fitzpatrick said. "What people need to understand is that when we talk about single-use bathrooms, it's a non-issue. One person goes in, one person comes out. You have no idea what they do when they're in there -- they can go in to fix their makeup or pick their nose, whatever they want to do. You don't need a scan that says, 'I'm appropriate for this one or that one.' You use it for what you need, and you move on."

Still, she's hopeful that the guide will be a valuable resource and is open to communicating with the Office of Human Rights in Washington, D.C., which has successfully integrated gender-neutral restrooms into businesses.

D.C. maintains the model to mimic. The city's Office of Human Rights launched a social media campaign last year that set out to enforce its gender-neutral regulations by encouraging people to photograph and hashtag ("#SafeBathroomsDC") businesses that haven't complied with the law. To date, 207 businesses have converted restrooms as a result of the campaign.

"While you’re out drinking mimosas and in line for the bathroom, send a tweet that says, 'Hey, this isn’t gender-neutral.’ It literally takes 20 seconds, and making it easy for folks is really an important piece of this," Elliot Imse, director of policy and communications for D.C.'s Office of Human Rights, told PhillyVoice. "We're happy to have Philadelphia use our campaign and for other cities to follow our lead on this."

Can Philly still lead the way?

Ultimately, what's frustrating for folks like Yezuita, Essenthier, Fitzpatrick and anyone else involved with this issue is that Philadelphia is following on this issue -- not leading. You won't find a #SafeBathroomsPHL hashtag circulating on Twitter yet.

But what our city can still lead on is how to communicate the usefulness of gender-neutral restrooms beyond the trans community.

"People will ask, 'Is it serving that many people?' And I say yes, because it affects more than gender-non-conforming people -- a mom who needs to change a diaper can go in that space, and it benefits her," Yezuita added. "The most misunderstood thing about the gender-neutral bathroom debate is the idea that it's people making up weird genders and asking for special accommodations. It's not going to be the 'transgender bathroom.'"

Chris Goy, formerly a legislative aide for Kenney, told PhillyVoice that the bill passed in 2013 pushed restroom rights "as far as they can go" under state law. The city's legal team, he said, informed them that mandating businesses to change their signage is illegal.

The obstacle for gender-neutral restrooms in Philadelphia is the state, which prevents further legislation from City Council. It would take state-level nondiscrimination protections for trans people in order for the city to have a stronger case to mandate gender-neutral signage in businesses. Jeff Sheridan, press secretary for Gov. Tom Wolf, told PhillyVoice that the governor supports gender-neutral restrooms.

For now, according to both the Philadelphia Commission on Human Relations and Fitzpatrick, the push for gender-neutral restrooms in Philly will remain grassroots.

"What gives us hope is businesses that do start doing it voluntarily -- chains like Starbucks, even," Fitzpatrick said. "The precedent is being set already in the private sector, and that's inspiring."