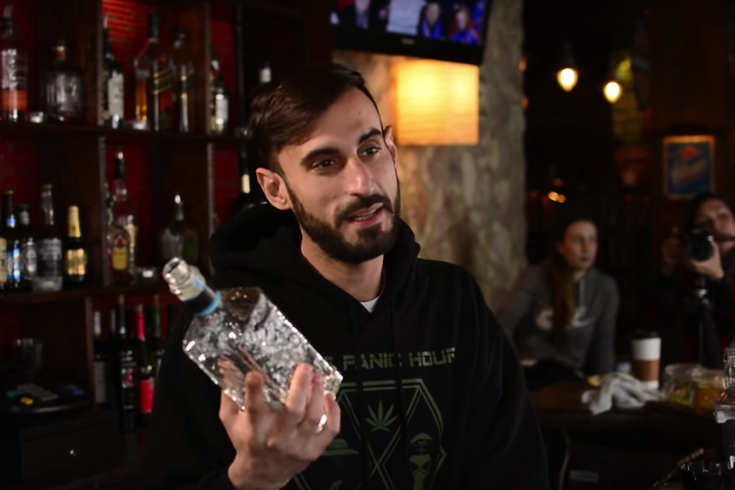 Nikki Allen Poe serves up alcohol as host of a recent cannabis versus alcohol challenge.

On a warm spring evening last week, a small group of senior citizens kicked back and relaxed – filling their lungs with marijuana smoke.

As they smoked "dabs" – a tar-like oil made from marijuana – a video camera rolled, capturing the scene for the latest in a series of videos intended to bring pot use in Philadelphia out from the underground and into the mainstream. The video will be titled "Dabbing to the Oldies."

In a "joint" effort, comedian, writer and longtime activist Nikki Allen Poe and his business partner Mike Whiter, a former U.S. Marine and fellow legal weed activist, run a video production outfit with twin goals: disprove myths about pot use and promote the legalization of the drug.

Long an activist for the legalization of marijuana in Philadelphia – he ran for City Council in 2014 on a marijuana law reform platform – Poe has changed his focus from what he calls "civil disobedience" to promoting marijuana culture after Philadelphia decriminalized small amounts of the drug.

Today, April 20, is a day used by pot activists to publicize their cause.

Though his brand and the name of his podcast, The Panic Hour, mostly focuses on issues of activism, Poe said he's started a new effort called Philly High Life aimed at promoting the culture and community of marijuana smokers' lifestyle. He also writes regularly under that moniker at a local blog.

"We want to come above ground and be considered productive members of society." – NA Poe, Philadelphia marijuana activist

Poe, 36, said that while most of society seems to be starting to "laugh off" pot use, he doesn't want his efforts, or those of fellow marijuana activists, to be laughed off.

"I'm more interested in being the weed Brian Sims than the Philly Tommy Chong," Poe said during a recent interview.

Poe said that Sims, Pennsylvania's first openly gay state legislator, is his "idol, personally" and he believes that America is at a time where pot users can look to the LGBT community as a way to bring marijuana users out of the shadows.

"I'm never going to compare the struggle of LGBT individuals to ours," he said. "But modeling parts of the movement on LGBT rights is a great way to do it."

"Why can't our gay bars be hash bars?" he continued.

Poe said he hopes the videos inform viewers about the use of marijuana, allow viewers to see real reactions of those using the drug and help Philly's pot-smoking underground community to step out of the shadows.

"We want to come above ground and be considered productive members of society," he said.

In a video titled "The Cannabis vs. Alcohol Challenge" – edited by "da Kitty," a pseudonym for a Poe friend who wishes to stay anonymous – Poe debates the dangers of marijuana and alcohol by assessing the effects of each drug as a pair of drinkers face off against a pair of pot smokers.

Needless to say, by the end, the drinkers are having a difficult time suppressing the physical effects of their heavy consumption, and Poe, who hosts the showdown, declares marijuana "definitively" safer than alcohol.

And, while the video is meant to be humorous, Poe said "we use humor as a weapon to point out the absurdity of something."

Poe said he thinks marijuana use is safer than alcohol use for several reasons, and not just because you can feed someone shots for two hours and "they are going to get messed up."

"It's also the damage that alcohol does over time... It gets passed down genetically and it's still available readily," he said. "I mean, how many people die a week in car crashes and no one's taking bikini models off beer billboards."

"We are working to create a persona that isn't just a guy in his basement with a bong," Poe said of his video project.

Whiter said he's a perfect example of that.

After spending 11 years in the armed forces and serving in Iraq and Kosovo, Whiter said he became a marijuana activist after being diagnosed with post-traumatic stress disorder and was given a prescription for anti-depressants.

At various points in treatment for PTSD, Whiter said, he was on several medications and became dependent on the pills to make it through the day.

"They even had me on methadone at one point," he said.

He felt like he needed the prescription anti-depressant pills, Whiter said, even though they made him feel hollow, emotionless and left him "drooling on myself."

A friend introduced him to marijuana, and he said, he quickly found that he regained control of his emotions.

"It [marijuana] made me feel like myself again," said Whiter. "Cannabis saved my life. I'll celebrate that every day."

Poe agreed, saying that marijuana has long been called a gateway drug, when, it's actually an "exit drug" to help people escape addiction that can be caused by prescription pills.

In fact, the overprescribing of opioids, which can lead to abuse and even addiction to heroin, has recently been the focus of an FBI and DEA education program.

"That's a problem that we've got to look in the eye," Poe said about addiction to opioids.

In Pennsylvania, according to a recent report, residents are more likely to die from a drug-related overdose than due to a car accident. Poe claimed states that have fully decriminalized marijuana have seen a full 25-percent reduction in opiate overdose fatalities.

Part of combatting overdoses, Poe said, is legalizing a drug that has never seen anyone die of an overdose.

"It's a healthcare issue dude," he said. "Cannabis has never killed anyone."