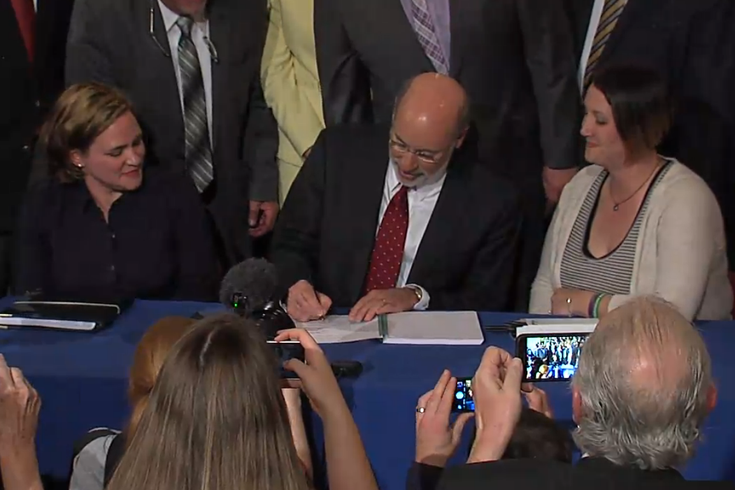 That's what state Sen. Mike Folmer (R-Lebanon) proclaimed when he got to the podium in Harrisburg Sunday afternoon. Lawmakers were gathered for a rare weekend bill signing where Gov. Tom Wolf turned legislation into a law that makes Pennsylvania the 24th state to legalize medical marijuana.

Folmer was the primary sponsor of Senate Bill 3, which went through a rigorous legislative process that lasted almost a year.

Advocates for the bill gathered at the Pennsylvania State Capitol and chanted "Mike! Mike! Mike!" before Folmer emotionally thanked them, his fellow lawmakers who helped push through the bill, and his staff.

Before signing the bill, Wolf praised the state legislature for their bipartisan efforts to make the drug legal for patients suffering from one of 17 qualifying conditions.

The sentiment of cooperation was echoed by Sen. Daylin Leach (D-Montgomery). He noted when he introduced similar legislation in 2010, he couldn't get a single co-sponsor, jokingly crediting his "favorite right-wing lunatic" in Folmer.

"We stopped being politicians and started being human beings."

In advance of the signing, Wolf's office released a fact sheet that provides information on the drug, such as who is eligible and how patients can obtain it.

The legislation passed the state Senate and House this month. Originally introduced last spring, the bill was amended due to technical concerns over how the state would implement and regulate a medical marijuana program.

Under the new law, patients suffering from one of the qualifying conditions — including, but not limited to, cancer, HIV/AIDS, multiple sclerosis, seizures and autism— will be able to access the drug in pill, oil or ointment form.

The state will authorize up to 25 marijuana growers and processors while allowing as many as 50 dispensaries each to operate three locations in Pennsylvania.

Patients and caregivers participating in the program will receive certified identification cards from the Pennsylvania Department of Health.

The law will take effect 30 days after Wolf's signature.