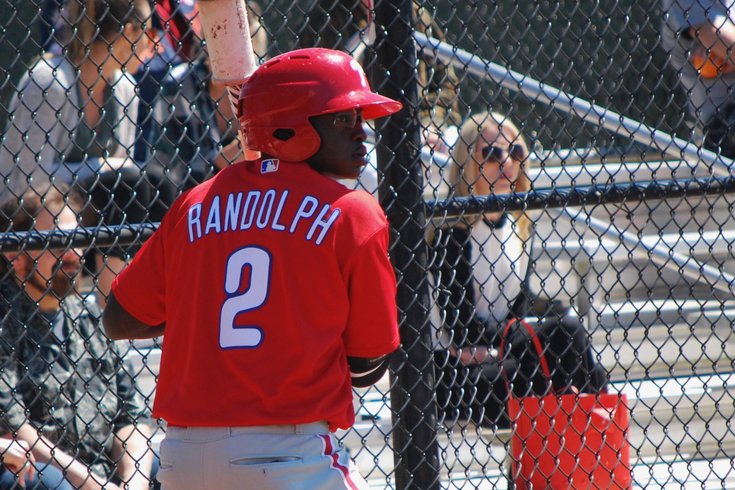 Cornelius Randolph, the 10th overall pick in the 2015 MLB Draft, gets his second full professional season underway tonight at Class A Clearwater.

You may notice something different about former Phillies first-round pick Cornelius Randolph in 2017: he’s wearing glasses, or more accurately, Rec Specs under the bill of his cap and helmet out in the outfield and at the plate this year.

Randolph battled an eye infection after switching to contacts in the last few years and decided to go back to glasses. So it’s not entirely a new thing since he wore them on the field as a kid.

The 19-year-old Randolph will get his second full professional season underway tonight when Class A Clearwater opens its season at Spectrum Field against Dunedin.

It’s a somewhat aggressive promotion for Randolph, who was limited to 63 games at Low-A Lakewood after being sidelined with an injury for the first half of the 2016 season. But after watching the talented left-handed hitting Randolph this spring, the Phils' development staff deemed the 10th-overall pick from the 2015 draft was up for the challenge.

ICYMI, we had Randolph in the Top 10 of our inaugural Phillies prospect power rankings last month.

Randolph, who hit .274 with a .355 OBP, two home runs and 12 doubles in 241 at-bats with Lakewood last season, took some time out from his morning work a couple of weeks ago for a round of The Q&A.

How are you feeling this year, no longer the most recent top pick facing his first pro season?

Cornelius Randolph: I feel comfortable. I feel ready to go, just taking it day by day.

Last year had to be at least a little bit frustrating, dealing with a nagging injury (shoulder blade strain) that left you on the sidelines for two months, right?

I mean, I look at it as a learning curve. It was my first full year of pro ball. You’re going to have to battle injuries (at some point). It wasn’t that bad. It was just a learning curve, you just have to learn from it.

How did that injury happen?

Hard to stay patient when you’re out that long?

You still end up getting two full months – how do you evaluate how you did, I think you hit around .280 with good on-base numbers?

I did pretty good. You just have to take it for what it is.

Expectations for this year, where do you hope to start, finish?

Wherever they put me I’m going to play. There are two levels: minor leagues and big leagues. [laughs] 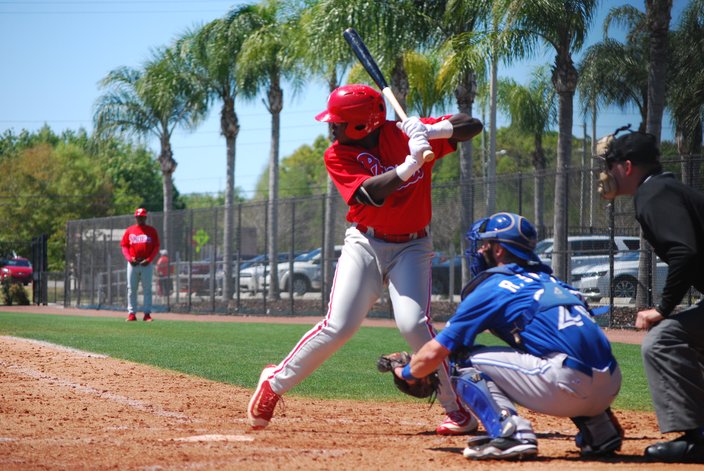 Cornelius Randolph slashed .274/.355/.357 in 63 games at Low-A Lakewood last summer. He finished the season strong, batting .295 in his final 48 games (after returning from a shoulder injury).

What was it like playing alongside Mickey Moniak for some games this spring?

He’s a cool guy to be around. A good teammate. A good player. Every day we go out, just being around all these guys is a good day.

Exciting to see the depth of talent growing in this (minor league) clubhouse?)

OK, let’s try some different stuff. I know you’re a Clemson fan – where did you watch the championship game?

Actually at my house in Georgia. I threw a little championship party. We had wings, pizza and watched the game. A pretty decent amount of people.

I know you were committed to going to Clemson – were you always a fan?

Did you watch the Heisman trophy ceremony?

I was actually in the cages, hitting when that was going on. So I didn’t get to watch it but I was rooting for Deshaun (Watson).

You’re obviously both from Georgia. Did you grow up near each other or ever play against each other at some point?

He’s from Gainesville, about an hour, 45 (minutes away). It’s not that close so we would only play them in the playoffs. But I’m also younger anyway.

Did you have some pretty good football players at your high school?

Yeah, we had Keyston Fuller, he’s at Duke right now. Christian Owens at (University of ) South Carolina. Malik Miller, he went to Air Force. Quandarius Weems at Furman. So, yeah, we had some pretty good players.

And you played football, too, right?

Yeah, I played football and basketball as a kid. I was a linebacker.

Are you a big Falcons fan?

Somewhat. I’m not that big of a (pro) football fan. I mean I’ll watch it, but not that (hardcore).

But you still watched that crazy Super Bowl, right?

Yeah, I was still pretty disappointed, that’s the hometown team, so. You gotta root for them.

What’s your favorite sport other than baseball?

I’d have to say basketball.

I used to watch it when I was younger.

I don’t even know that one but I know there are a ton of baseball movies.

It’s a good one. It’s about this little kid who goes to the Little League World Series. And he won it, but he was too old to play in it. It’s a really good movie.

Your favorite baseball player as a kid?

What did you like best about Cano, his swing?

Just all-around, his swing, the way he plays defense, the way he carries himself, everything.

Yeah, I’ve been watching “Shameless,” that’s a really good show. And I like cartoons, “Family Guy.” "Shameless" would have to be the one I’m watching the most.

Yeah, that’s a good one, I’ve been watching that since the beginning.

So what did you do this offseason?

I spent it in Georgia. And then I went to Miami because my agent (Scott Boras) has an institute down there. So I went down there to work out for a couple of weeks. And then I went back home to spend some time with my family before I came down here.

Excited to get going?