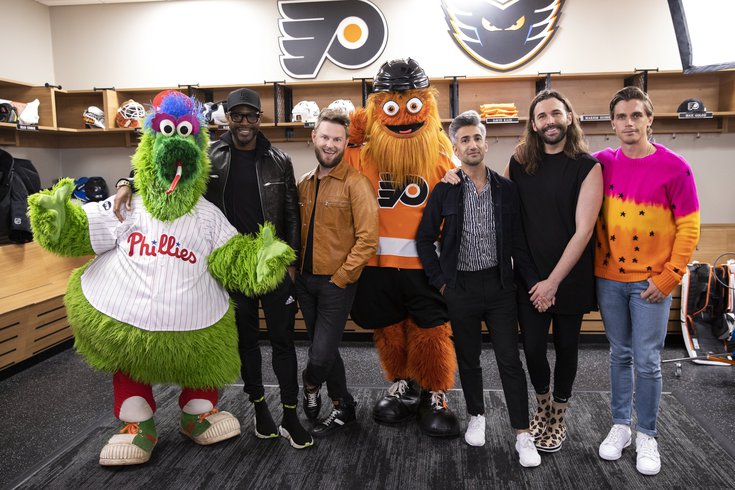 Gritty was nominated for a makeover on 'Queer Eye' by his good friend, the Phillie Phanatic.

A bonus episode from the fifth season of "Queer Eye" that saw Gritty get his own makeover has been honored with a 2021 Webby Award.

The web-only special was named the People's Voice winner in the Games (Branded) subcategory of Video at the 25th annual Webby Awards ceremony on Wednesday. The category is made up of video content focused on games or gaming culture created on behalf of a product or brand.

"A Very Furry Queer Eye Special: Philadelphia Flyers Mascot Gritty Gets a Makeover" premiered last June on YouTube after the fifth season of "Queer Eye," which was set entirely in Philadelphia, debuted on Netflix.

Gritty was nominated for a "Queer Eye" makeover by his good friend the Phillie Phanatic, who penned a letter with his nomination to the feel-good makeover show's Fab Five.

Started in 1996, the Webby Awards honor excellence on the internet. The awards are presented by the International Academy of Digital Arts and Sciences, a 2,000-person body of judges that was founded in 1998.

The Webby Awards are broken up into seven major categories: websites and mobile sites; video; advertising, media and public relations; social; apps, mobile and voice; games; and podcasts. Each major category has its own subcategories. Special achievement awards are handed out each year, too.

The "Queer Eye" special wasn't the only nomination featuring the Flyers' fuzzy orange mascot. "Gritty's ¼ Hour of Power: An Instagram Live Daily Variety Show" was an honoree this year for the Sports (Series & Campaigns) subcategory of Social. However, it lost to Nike's Mamba Week campaign honoring the late Kobe Bryant. The subcategory consists of social media content and campaigns focused on sports teams, athletes and games.

A project titled "Philadelphia's Violent Attack on a Black Radical Group" by Atlantic Re:think, the news media outlet's creative marketing team, was nominated this year for Best Branded Editorial Experience in the Advertising, Media and Public Relations category. The category honors the best individual and multi-part stories or editorial features that are enhanced by the addition of innovative storytelling elements, design components and increased interactivity.

However, the project lost to Spotify's "Your 2020 Wrapped" series and a campaign called "Rising Time" for Trojan condoms by a global marketing company called 72andSunny.

"Philadelphia's Violent Attack on a Black Radical Group" was created in conjunction with the HBO documentary "40 Years a Prisoner" that was released this past December about the city's controversial MOVE raid in 1978. The event served as a precursor to the MOVE bombing in West Philly seven years later that killed 11 people.