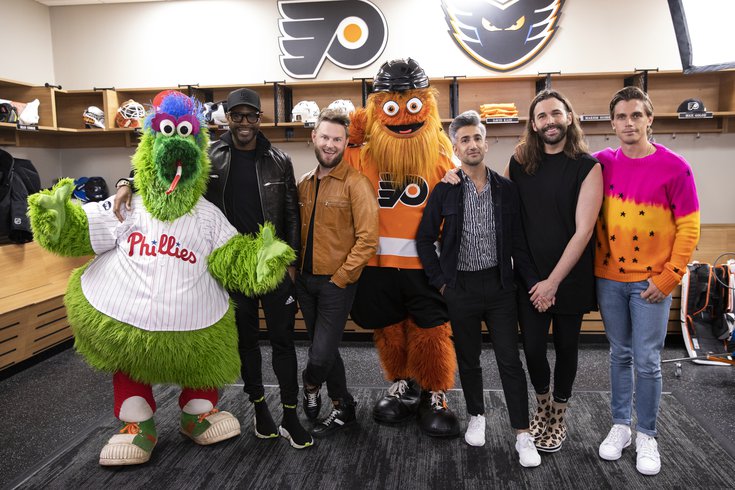 In a bonus mini-episode of "Queer Eye" Season 5, the Philadelphia Flyers mascot Gritty receives a "make better" from the Fab Five.

It's confirmed! On Tuesday afternoon, it was officially announced that in a bonus mini-episode of "Queer Eye" Season 5 the Philadelphia Flyers mascot Gritty receives a "make better."

The famous mascot is known for being a little rough around the edges, and after spending time with the hosts of Queer Eye, he learns to embrace all his…  uniqueness and just be himself with his wild eyebrows and mischievous personality. With a special guest appearance by the Phillie Phanatic who understands the pressure of being in the spotlight better than anyone, Gritty is ready to tackle his fears and become the best version of himself.

You can watch the new "Queer Eye" episode featuring Gritty below.

Original story: If you binged the new season of "Queer Eye" based in Philadelphia and are craving more of the feel good makeover show, you may have less time to wait for a new episode than expected.

On Tuesday morning, the "Queer Eye" Twitter account posted a picture of a letter addressed from the Phillie Phanatic to the Fab Five with the caption, "One final hero for QUEER EYE SEASON 5?! We wonder who it could be."

RELATED: A year after his 'Queer Eye' makeover, Philly’s Pastor Noah remains a changed man | 'Queer Eye' star Bobby Berk on filming in Philly, how the show has changed and keeping it real

One final hero for QUEER EYE SEASON 5?! We wonder who it could be 🤔🤔🤔🤔 pic.twitter.com/2GfZGkyZ1u

The letter reads, "I'm so happy to hear that you are coming to the City of Philadelphia for Season 5 of 'Queer Eye.' And do I have the perfect hero for you. My pal." The letter appears to continue but whatever else was written is unclear, as the rest of message has been ripped away.

That didn't stop internet sleuths from forming their own theories. Since "my pal" is in orange, maybe our favorite green mascot has nominated our favorite orange mascot, Gritty, for a makeover. We know from social media, the Phanatic and Gritty have become friends.

Shortly after the "Queer Eye" post, the Flyers mascot also tweeted. He only posted a pair of eyes, but that may be enough to confirm he's in on whatever is going on.

If it is Gritty who's getting a makeover, I can't wait to see what he looks like with a Tan France approved French tuck and a new hairdo courtesy of Jonathan Van Ness.

And if we're wrong? If it's not Gritty? I'll just be happy for an extra episode of Season 5.