Pennsylvania's former health secretary is the highest-ranking openly transgender official in U.S. history, Sen. Toomey was among those to vote against her appointment 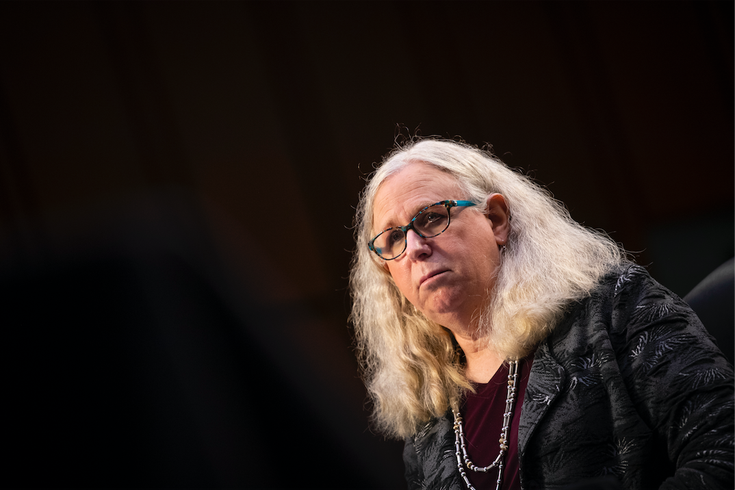 Dr. Rachel Levine was confirmed by the U.S. Senate in a 52-48 vote to become the next assistant secretary for health in the U.S. Department of Health and Human Services. Levine, a transgender woman and the former Pennsylvania health secretary, faced staunch opposition from religious groups and many Republicans.

Former Pennsylvania Secretary of Health Dr. Rachel Levine was confirmed by the U.S. Senate on Wednesday as the Biden administration's next assistant secretary for health in the Department of Health and Human Services.

In a 52-48 vote, the Senate made Levine, 63, the highest-ranking openly transgender federal official in U.S. history.

Levine, a pediatrician and Harvard University graduate, was the leading figure in Pennsylvania's coronavirus response last year prior to receiving the nomination from President Biden.

"President Biden committed to appointing our nation’s most qualified leaders to tackle the pandemic and he delivered in choosing Dr. Levine," said Annise Parker, former mayor of Houston and president of the LGBTQ Victory Institute. "Yet the importance of this moment extends well-beyond the health of our nation alone. At a time when hateful politicians are weaponizing trans lives for their own perceived political gain, Dr. Levine's confirmation lends focus to the contributions trans people make to our nation and deflates absurd arguments calling for their exclusion."

The choice provoked strong backlash from religious groups and Republican leaders who criticized Levine for Pennsylvania's nursing home policies during the pandemic.

Some hospitalized patients were permitted to return to long-term care facilities after their recovery, a practice some contend led to high rates of illness and death among vulnerable seniors. Nursing trade groups in Pennsylvania have disputed this claim and said these facilities were not forced to accept COVID-positive patients. Levine also has been criticized for arranging to have her 95-year-old mother taken out of a personal care home during the pandemic.

Sen. Pat Toomey, of Pennsylvania, was among those who voted against Levine's confirmation.

"In Pennsylvania, the pandemic struck seniors in nursing homes disproportionately hard compared to other states. This was due in part to poor decisions and oversight by Dr. Levine and the Wolf administration,” Toomey said in a statement Wednesday.

Though Toomey said he appreciates Levine's "service and responsiveness," he declined to support her confirmation.

Levine was frequently the target of hateful and transphobic attacks in Pennsylvania during her time as secretary of health. She was defended by Gov. Tom Wolf, who called on residents of the state to stand up against transphobia.

Wolf offered his congratulations to Levine on Wednesday.

I couldn’t be prouder of all she’s done to serve Pennsylvanians — including her tireless work during the pandemic.

The nation is lucky to have her strength, experience, and compassion in this key role. https://t.co/6ezfjjK2Fj

The first openly transgender official to work in the White House was Raffi Freedman-Gurspan, who served in the Obama administration and called Levine's accomplishment a significant step forward for the country, according to the Washington Post.

“I firmly believe that turning points, such as today’s Senate confirmation vote for Dr. Levine’s appointment, are powerful indications that this nation is truly heading down the pathway to lasting transgender equality,” Freedman-Gurspan said Wednesday.