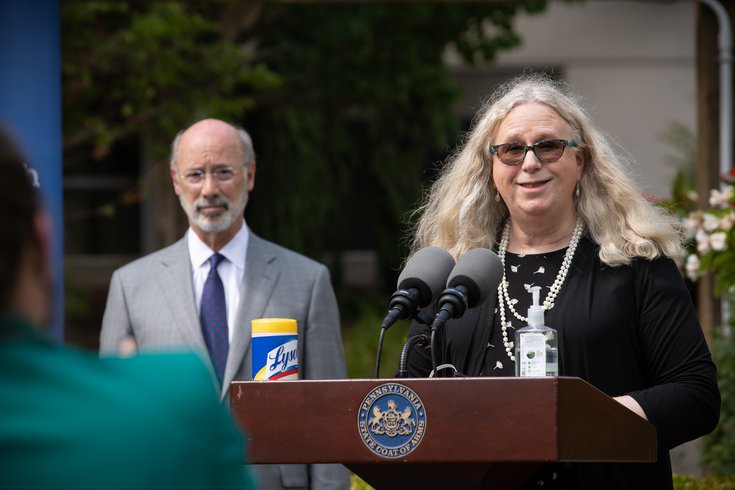 The dunk tank incident at the Bloomsburg Fair prompted a strong rebuke from Pennsylvania Gov. Tom Wolf, who offered support for the state's transgender community after Health Secretary Dr. Rachel Levine, a transgender woman, was impersonated in the carnival game.

The incident took place Saturday, when an unidentified man wore a floral dress, glasses and a blonde wig as contestants threw balls to dunk the impersonator into a tub of water.

Levine, a transgender woman, has been the target of frequent ridicule in recent months. During the coronavirus pandemic, she often has been in the spotlight as she leads Pennsylvania's public health response to COVID-19.

"Dr. Levine? Thank you," the now-deleted post said, with a picture of the impersonator in the dunk tank. "You were a hit and raised lots of money for the local fire companies. Wonder why so many were trying to dunk you. Thanks everyone that came out to support our local fire companies."

While the "why" in that question is open-ended, Levine's critics regularly blur the line between transphobia and opposition to the state's COVID-19 response.

The Bloomsburg Fair initially denied that the dunk tank game, which raised money for local fire companies, had any anti-transgender motive. Its sole purpose, fair officials said, was to support firefighters using the likeness of a public figure.

Wolf, who has consistently backed Levine's professionalism, called on Pennsylvanians to speak out against intolerance in his statement on Wednesday:

The COVID-19 pandemic has brought hate and transphobia into the spotlight through relentless comments and slurs directed at Secretary of Health Dr. Rachel Levine, who is a highly skilled, valued and capable member of my administration and transgender. The derogatory incident involving the Bloomsburg Fair is the latest of these vile acts, which by extension impact transgender people across the commonwealth and nation.

Dr. Levine is a distinguished and accomplished public servant. She is committed to keeping Pennsylvanians safe and healthy, even those who direct hate-fueled attacks at her. I’m proud of the work she has done in her five years serving Pennsylvanians, and her success at leading our commonwealth during the COVID-19 crisis is a testament to her intelligence and work ethic.

Hate has no place in Pennsylvania, even in the smallest transphobic joke, action or social media post. I’m calling upon all Pennsylvanians to speak out against hateful comments and acts, including the transphobia directed at Dr. Levine and all transgender people in our great commonwealth.

"On behalf of the Bloomsburg Fair Association Board of Directors, our sincerest apologies go out to Dr. Levine, our shareholders, our sponsors and others for this serious lapse in judgment," Karschner said. "The fair prides itself on celebrating the diversity and inclusion of all who visit the fairgrounds."

More than 50 LGBTQ+ organizations in Pennsylvania believe the apology did not go far enough. They have called for the Bloomsburg Fair to send a written apology to Levine and post the letter publicly.

"Not an excuse, an actual apology which recognizes the hurt and the harm done," the organizations said in a jointly issued list of demands.

"Our organizations know how harmful this action was because we understand the effects of transphobia on the people we serve," the groups added in a statement released through the PA Youth Congress. "We recognize how transphobia leads to higher rates of violence and suicide. We witness how transgender people are denied housing and public services. We feel the effects of pervasive anti-transgender bullying and harassment in schools. The public display of bigotry at your event perpetuates this violence."

Karschner said Tuesday that the Bloomsburg Fair has been in touch with Levine's office, but did not indicate whether the dunk tank incident was discussed. The fair is currently scheduled to continue into August, but could be impacted by revised COVID-19 restrictions in Pennsylvania.

"The rules changed last Thursday," Karschner said of the stricter regulations on bars, restaurants and social events. "You can’t really write your game plan when the goal posts keep moving."