Projections show coronavirus transmission on the rise across state 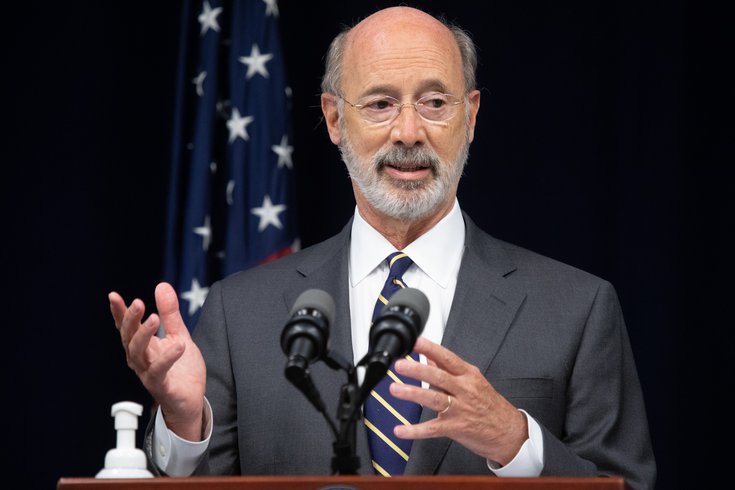 Pennsylvania Gov. Tom Wolf said that a new COVID-19 surge could potentially eclipse the peak seen in April if targeted efforts are not made to limit the spread of the infection. New measures announced Wednesday focus on transmission at bars, restaurants and other indoor settings.

Pennsylvania imposed a targeted mitigation strategy on Wednesday to snuff out an approaching surge in COVID-19 cases across the state, Gov. Tom Wolf announced.

The new measures will focus on restaurants and bars, which will have their indoor capacity limits reduced from 50% to 25% statewide. Bars will only be allowed to sell alcoholic beverages to guests who purchase food and are seated at a table or booth, including bars that seat guests outdoors.

"If you're a dive bar or a nightclub and all you do is serve drinks, that's not going to work," Wolf said in a press briefing Wednesday afternoon.

All music and nightclubs must close, and businesses will now be required to have employees work remotely if the work does not need to be done in the office.

“During the past week, we have seen an unsettling climb in new COVID-19 cases,” Wolf said. “When we hit our peak on April 9, we had nearly two thousand new cases that day with other days’ cases hovering around 1,000. Medical experts looking at the trajectory we are on now are projecting that this new surge could soon eclipse the April peak. With our rapid case increases we need to act again now.”

Case counts have increased in 43 of the state's 67 counties, while the percent positivity rate of COVID-19 tests has risen in 28 counties. The Pittsburgh area and surrounding parts of Allegheny County have seen the largest increases, but Philadelphia and its collar counties also are showing elevated transmission rates.

Three catalysts appear to be driving the increase in cases across Pennsylvania: out of state travel, people not wearing masks and a lack of national coordination that has led to large spikes in cases in southern and western states.

The decision to target bars and restaurants was made because airborne transmission in indoor settings and crowds appears to be the main vector of new infections. Indoor events and gatherings of more than 25 people are now prohibited, while outdoor events attended by more than 250 people are barred in Pennsylvania.

"By acting now, and making these specific and targeted mitigation efforts statewide, we can get ahead of the curve," Levine said.

Pennsylvania on Wednesday reported 994 new cases of COVID-19, bringing the statewide total 97,665. Another 26 fatalities attributed to COVID-19 raised the state's death toll to 6,957.

Levine said it's "very good news" that Pennsylvania reported a record of more than 28,000 COVID-19 test results on Wednesday as the state continues to expand testing capacity.

The health secretary pointed to Florida as a dire cautionary tale for what Pennsylvania must avoid. The state recorded a record of more than 15,000 new cases in a single day last weekend. Hospitals in the state are increasingly overwhelmed and deaths are beginning to catch up with the rise in cases.

"In Florida, you can see what happens when you don't do any mitigation efforts and you just let the virus burn," Levine said.

Dr. David Rubin, a pediatrician and director of CHOP's PolicyLab, said Wednesday that his group's projections show clear signs of danger if stronger mitigation efforts are not adopted.

“Over the last few weeks, public health reporting and our team’s modeling work have uncovered incontrovertible evidence that the virus is sweeping quickly into the northeast region of the United States from the west and south—where there has been a failure in some states to practice vigilance in masking and social distancing — and that it has already begun its resurgence in Pennsylvania,” said Rubin. “We can halt this momentum in its tracks. Governor Wolf’s measures will help stop the continued spread of the virus into Pennsylvania and its surrounding states, which would threaten the reopening of schools and our economy in the coming months.”

Wolf acknowledged that the new restrictions are difficult for business owners impacted by these measures.

"This whole process, we've had an array of choices, and they've all been bad," Wolf said. "The decision is, what is the least bad among them."

Levine added the state is utilizing the knowledge it gained during the early months of the pandemic in order to avoid the breakdowns seen elsewhere in the United States.

“The actions the governor and I are taking today are designed to be surgical and thus precise to prevent from repeating the cycle we saw in the spring,” said Levine. “We have gained a great deal of experience since the start of this outbreak and have learned from best practices from other states as well as counties right here in Pennsylvania.”

“We have seen these efforts work during the first wave in the spring, and they will work again if we all do our part," Wolf said.