The former leader of Pennsylvania' health department, who is a transgender woman, is nominated by the Biden administration to be assistant health secretary 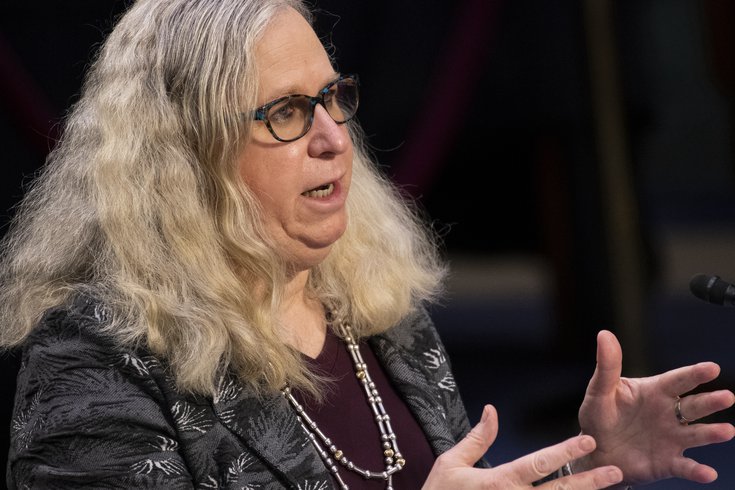 Sen. Rand Paul misrepresented Dr. Rachel Levine's stance on transition surgeries for transgender children during her senate confirmation hearing Thursday. Levine is the former health secretary for Pennsylvania and she has been nominated for a role in President Joe Biden's administration.

Sen. Rand Paul attempted to misrepresent Dr. Rachel Levine's stance on transgender medicine during her Senate committee confirmation hearing this week, and tried to paint her as a supporter of transition-related surgeries for minors.

Levine is the Biden administration's nominee for assistant health secretary, which, if confirmed, would make her the highest-ranking openly transgender official in government history. She previously served as the Pennsylvania's health secretary.

During the hearing before the Senate's Health, Education, Labor and Pensions committee, Paul, a Republican from Kentucky, tried make an analogy between "genital mutilation" and transition-related surgeries for minors, the Washington Post reported.

"For most of our history, we have believed that minors don’t have full rights and that parents need to be involved," Paul said Thursday. "We should be outraged that someone’s talking to a 3-year-old about changing their sex."

Levine replied that "transgender medicine is a very complex and nuanced field with robust research and standards of care that have been developed," and told Paul she would discuss the topic further with Paul if confirmed to her role with the Biden administration.

Paul also questioned Levine on whether minors should have access to "puberty blocking" drugs and hormone therapies.

Levine has not advocated gender reassignment surgeries for children, though she is in favor of protocols to start  hormone therapy for young patients, including giving patients medications that block puberty followed by hormone treatments, a process that can take years.

Paul tweeted later that Levine never answered his question about whether minors should receive "puberty blockers or surgical amputation of breasts or genitalia."

Biden nominee refuses to answer my question about whether the government should override a parent’s consent to allow a minor to receive puberty blockers or surgical amputation of breasts or genitalia. https://t.co/XiWTfQFE89

Biden nominee refuses to answer my question about whether the government should override a parent’s consent to allow a minor to receive puberty blockers or surgical amputation of breasts or genitalia. https://t.co/XiWTfQFE89

Confirmation hearings include several rounds of investigation and review, and a senate hearing.

This exchange sparked criticism from Democrats in the senate, among them Sen. Patty Murray, chair of the senate health committee, and Sen. Tammy Baldwin, the first openly gay candidate elected to the senate.

"It is really critical to me that our nominees be treated with respect and that our questions focus on their qualifications and the work ahead of us, rather than on ideological and harmful misrepresentations like those we heard from Senator Paul earlier," Murray said.

"Their attacks on trans people in the transgender community are just mean. Mean," he said.

Pennsylvania Sen. Bob Casey had introduced Levine to the Senate for the hearing.

Today @SecretaryLevine demonstrated why she is the crisis-tested leader our Nation needs as Assistant Secretary for Health at this time. In Pennsylvania, she implemented policies that stemmed the tide of opioid overdoses and saved rural hospitals.

Biden chose Levine last month. Levine is a pediatrician and fellow of the American Academy of Pediatrics, the Society for Adolescent Health and Medicine and the Academy for Eating Disorder.

Her confirmation hearing took place the same day the Equality Act, which would amend the 1964 Civil Rights Act to include sexual orientation and gender identity as protected classes, was passed in the U.S. House of Representatives.

Also, Dr. Vivek Murthy, Biden's pick for U.S. surgeon general, was up for consideration by the Senate committee during the same hearing on Thursday. Murthy served as the surgeon general during the Obama administration.