In racist rant, Alabama sorority sister says she can use N-word because she's from New Jersey 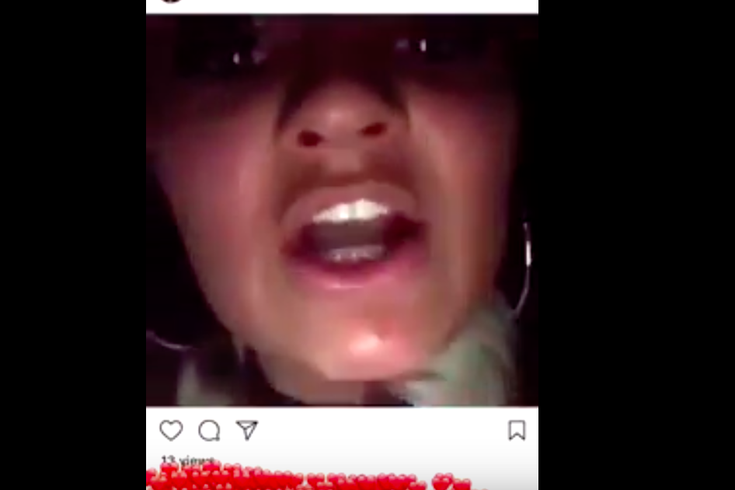 A screenshot of a racist Instagram rant from a University of Alabama student from New Jersey.

A sorority sister at the University of Alabama who hails from Marlton, New Jersey, has been kicked out of her Greek organization after going on a racist rant on social media, during which she uttered a slur for African Americans multiple times.

Harley Barber made the remarks on her "finstagram" account, which is a secondary Instagram profile some users create with the intent of keeping it secret. A Twitter user recorded Barber's video in which the sorority sister says she "f***ing hates n******."

In a second video, Barber expresses how much she loves her sorority, Alpha Phi, and chides whoever broadcast the first video for potentially jeopardizing her membership. She says she doesn't care that it's Martin Luther King Jr. Day, that she's in the South now and can use the slur "as much as I want" because she's from New Jersey.

You can watch the videos, which obviously contain explicit and offensive language, below.

In response to several Twitter users bringing the video to the school's attention, the University of Alabama issued a statement calling the remarks "ignorant and disturbing." School officials told AL.com they're investigating the videos.

These remarks are ignorant and disturbing and in no way reflect the values of The University of Alabama. This unfortunate behavior has been reported to the Office of Student Conduct as it does not align with the community expectations of students at the Capstone.

In a statement, Linda Kahangi, executive director of Alpha Phi International Fraternity, said Barber is no longer with the sorority. Per The Root:

Alpha Phi is a diverse, values-based organization and condemns the language and opinions in these videos. They are offensive and hateful to both our own members and to other members of the Greek and campus community. The Beta Mu chapter leadership and supporting alumnae moved quickly to address the offense, and Ms. Barber is no longer a member of Alpha Phi.

The videos drew intense backlash, including from Alabama football player Damien Harris, who tweeted that people are still "oblivious" to racism.

The worst part to me is the fact that people are still oblivious to the fact that stuff like this still goes on 🤦🏽‍♂️ https://t.co/t0u3O03oha

This girl goes to the same university as me but they say, “racism is dead.” Unfortunately, this thread says the opposite. https://t.co/OaYeCVEGUQ

The Root noted Barber's Facebook page indicated she's from Marlton. Her social media accounts appear to have since been deleted.