Accidents involving the 10-foot, 10-inch high structure have been a nuisance on King of Prussia Road for years 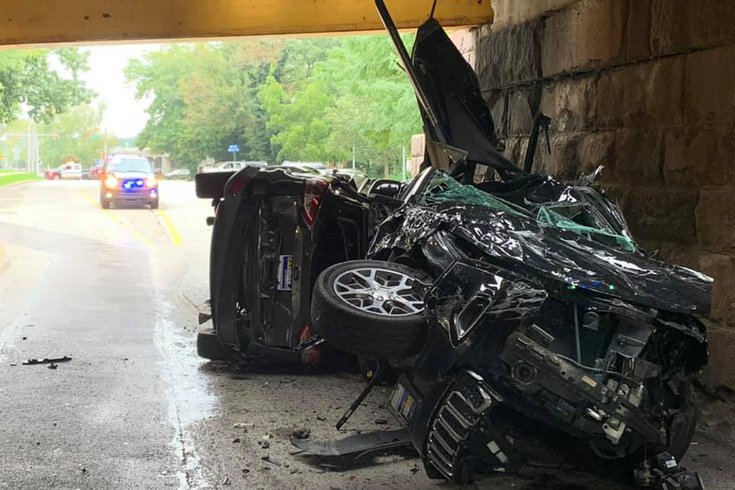 A pair of vehicles were destroyed in Radnor Township on Thursday when a truck slammed into a low clearance bridge on King of Prussia Road. The bridge, which is used by SEPTA and Amtrak trains, has been a frequent sight of similar crashes for years.

A railroad bridge in Radnor Township that has been a frequent site of motor vehicle crashes struck again Thursday when a truck transporting cars slammed into the low-clearance overpass.

The bridge, which crosses King of Prussia Road between Matsonford and Radnor Chester roads, has a clearance of just 10 feet, 10 inches. SEPTA and Amtrak trains run on it.

Photos from the aftermath of the latest crash show two cars in shambles beneath the bridge. A Ford Escape and Jeep Grand Cherokee, both with CarMax plates, appear almost unrecognizable. Fortunately, no one was injured in the crash, but the road was temporarily shut down as the scene was cleared.

The bridge has been a persistent thorn in the side of Radnor Township police and commissioners, who by now know the drill whenever a truck driver gambles on getting underneath the structure.

Between 2008 and 2017, at least 43 trucks slammed into the overpass, according to a Philadelphia Inquirer report on the costly problem. A Main Line Media News report last year indicated the bridge has been struck approximately 120 times in the past decade, suggesting the issue has gotten worse in recent years.

Though the bridge and signage leading up to it clearly indicate the height restrictions, the crashes have continued to pile up. Citations for drivers are typical in these incidents, but last year Radnor officials considered an ordinance that would impose fines of $1,500 for a first offense and $2,500 for each subsequent crash. Concerns about the steepness of the fines and whether individuals or companies would be liable for the payment of fines held up further action.

Though King of Prussia Road is owned by PennDOT, the bridge is federal property. Modifying its height to make the road more accessible would require federal participation in efforts to address the matter with PennDOT and Radnor Township. Despite the number of incidents that have occurred, the bridge has maintained its structural integrity over the years.

Increased vehicle traffic through Radnor and the prevalence of GPS navigation are believed to be among the reasons that crashes into the bridge are so common, since navigation apps typically do not have warnings for the low-clearance bridge. Drivers may defer to their app's route suggestions and ignore the signs right in front of their eyes.

One possible solution could be an over-height vehicle detection system that would use flashing lights to indicate the danger in front of truck drivers, but the technology is expensive and there are doubts about whether it would be effective if obvious signage isn't already doing the trick. Perhaps an even more distinct set of signs and warnings on the overpass would get the attention of drivers who become inundated with visual markings of caution in their travels.

After yet another crash, authorities in Radnor may have to put their heads together again to figure out a viable path forward to effectively limit the frequency of these incidents in the short- and long-term.