Sue Barbacane's 'light shines ever so brightly on all she touched,' the former 76ers president said 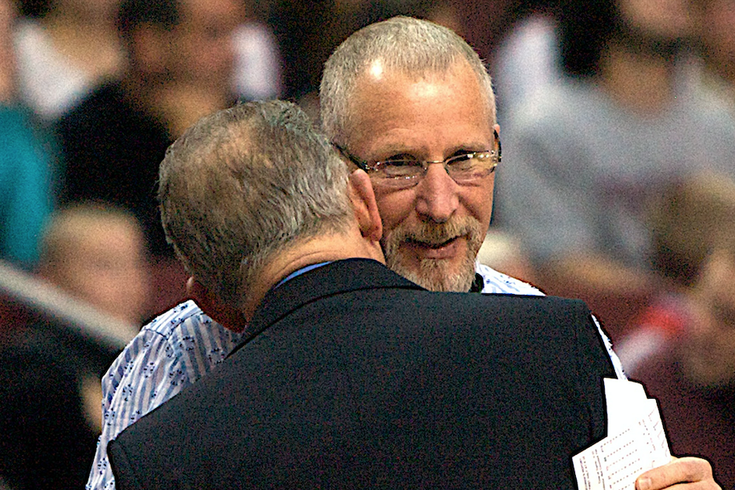 Former Sixers President Pat Croce, above in a file shot, mourned the death of his longtime assistant, Sue Barbacane. 'If you have ever contacted me, then you know Sue,' he wrote on Twitter. 'God picked a good one.'

Sue Barbacane, a longtime personal assistant to former Sixers President Pat Croce, was killed after being struck by a car while walking in Philadelphia.

Barbacane, 65, had worked for the entrepreneur for 35 years, Croce said.

"If you have ever contacted me, then you know Sue," Croce wrote on Twitter. "God picked a good one."

Barbacane was walking at Comly Street and Harbison Avenue in Wissinoming around 2:30 p.m. when two vehicles collided at the intersection. One of the vehicles struck the woman, police said.

One driver stayed at the crash scene. The second driver initially fled before returning to the scene, police said.

Barbacane was rushed to Jefferson Torresdale Hospital, where she was pronounced dead at about 3:45 p.m., NBC10 reported.

She had gone out for an afternoon walk, but later planned to attend the Phillies-Rockies game at Citizens Bank Park, Croce said.

My personal assistant of 35 years, Sue Barbacane, was killed this evening by a hit & run driver while she was walking prior to attending her favorite activity, a Phillies game. If you have ever contacted me, then you know Sue. God picked a good one. 🙏

"Thank you deeply for your thoughts, prayers & meditations," Croce posted. "Sue's light shines ever so brightly on all she touched."

“When a light returns to its Source, it takes nothing of what it has illuminated.” #Rumi Thank you deeply for your thoughts, prayers & meditations. Sue’s light shines ever so brightly on all she touched. #love #peace #silence

Philadelphia police are investigating the incident as a fatal crash. It's not known clear whether any charges will be filed against the drivers, 6ABC reported.