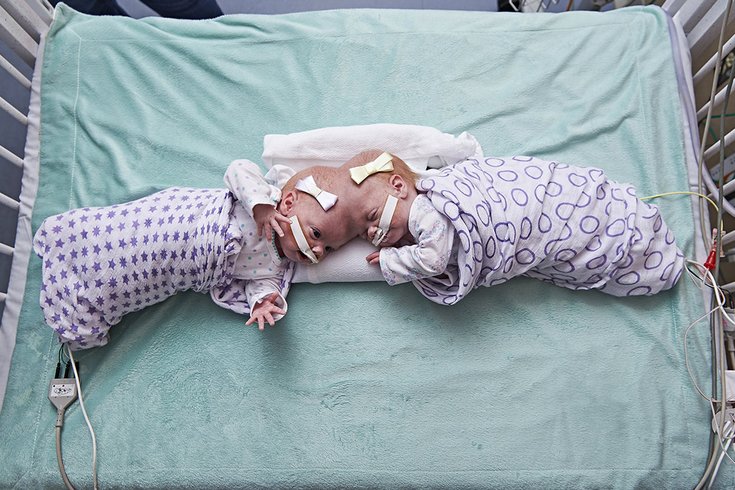 On Tuesday, June 6th, surgeons at Children’s Hospital of Philadelphia successfully completed the separation of 10-month-old conjoined twins Erin and Abby Delaney. The girls are from North Carolina.

A team of surgeons at the Children's Hospital of Philadelphia successfully separated twin girls who were conjoined at the head,  pulling off a rare operation that lasted nearly 11 hours earlier this month.

On June 6, a group of approximately 30 surgeons, anesthesiologists, nurses and other specialists completed the grueling procedure on 10-month old twins Erin and Abbey Delaney, who were born in Philadelphia at CHOP's Newborn/Infant Intensive Care Unit on July 24, 2016.

The Delaney twins, who are from North Carolina, became fused at the top of their skulls in a condition known as craniopagus, the least common type of conjoined twins. The family came to Philadelphia after an ultrasound at 19 weeks revealed the extent of the irregularity, which was first detected at 11 weeks.

Heather Delaney, the twins' mother, remained under the care of CHOP specialists from her 26th week of pregnancy until Erin and Abbey were delivered via C-section at the hospital's Garbose Family Special Delivery Unit, a facility dedicated to mothers carrying fetuses prenatally diagnosed with birth defects.

“Separating conjoined twins is a very complex surgery followed by a long and complicated recovery, but we are very hopeful for a positive outcome,” said Taylor. “Erin and Abby are now recovering in our Pediatric Intensive Care Unit under close monitoring by our expert teams,” said plastic surgeon Jesse Taylor, who co-led the procedure with neurosurgeon Gregory Heuer.

Each born at two pounds and one ounce, Erin and Abby received care at CHOP's Newborn/Infant Intensive Care Unit for their first seven months. During that time, while still conjoined, teams of physical, occupational and speech therapists developed treatments and exercises for the infants in advance of the operation.

The surgery and reconstruction, completed after months of planning and preparation, marks CHOP's first separation of a craniopagus pair. The condition occurs in about 10-20 babies in every million births in the United States, accounting for just two percent of conjoined twins, most of whom are female and stillborn.

“During the separation surgery, our team first meticulously separated the infants’ shared blood vessels and dura, the tough protective membrane surrounding both brains, then moved on to separate the sagittal sinus, the most difficult portion of the operation,” said Heuer. “Finally, we divided our team into two halves, one for each of the girls, and finished the reconstruction portion of the surgery.”

Erin and Abbey are now in recovery side by side in a separate pair of beds. They will be followed in the months to come by their team of surgeons, nutritionists, developmental pediatricians and other specialists to ensure that they have the best opportunity for healthy development. Additional surgeries for both twins are likely during this process, but Heather and her husband, Riley, are expected to bring the girls back to North Carolina later this year.

Since 1957, doctors at CHOP have separated 23 sets of conjoined twins, more than any other hospital in the Western Hemisphere.