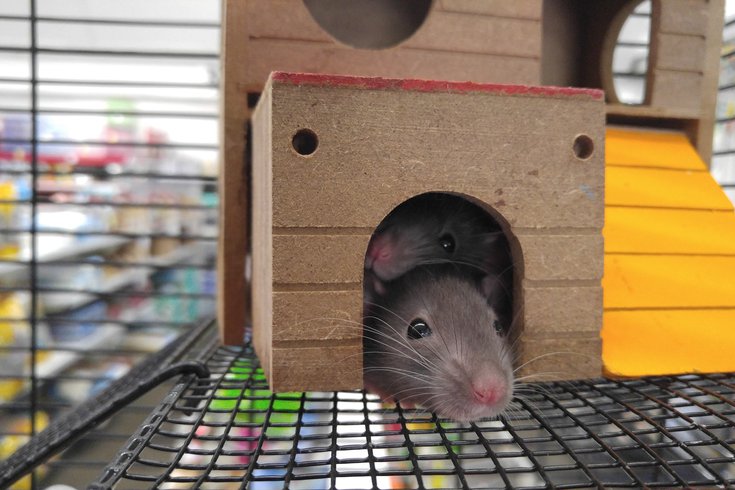 A large number of domesticated rats were illegally dumped in the Harrisburg area, leading to a volunteer effort to rescue the animals and find them new homes.

Most people don't have very favorable opinions on rats, who are maligned in urban landscapes for rifling through trash, carrying diseases and generally being creepy scavengers. Their long tails are usually among the first things mentioned by people who've got musophobia.

Anyone who has ever kept a rat as a pet will be the first to say they're actually some of the sweetest and smartest companions you can bring into your home. The only problem is that they don't live for very long, so it's rough getting attached to them only to have them die after a few years.

If people in Dauphin County and elsewhere are willing to step up, there are now possibly hundreds of abandoned pet rats that need homes.

At some point late last week, someone illegally dumped a large number of domesticated rats in Harrisburg and nearby Steelton, authorities said.

Steelton police were called to the 800 block of North Front Street Thursday afternoon for a report of friendly rats that had been abandoned there. When officers arrived, they found a number of people at the scene trying to collect the rats and bring them to safety.

Among the volunteers was Bethany Pascoe, who shared several photos and videos from the scene. She and others are now seeking donations to take care of the animals and rehome them. Pascoe helps run the Hazeljane's Blessings dog rescue and felt called on to rescue the rats, who were docile and not afraid of people, especially when offered food.

taking a break until this evening, but this is what myself and a new friend were able to catch. If anyone would like...

Some Facebook users have speculated that as many as 1,000 or more rats were dumped in Harrisburg and Steelton. Pascoe said she observed at least 100 and had collected more than 50.

Organizations like The Eclipse Project, which serves Harrisburg's homeless community, also have been helping to lead the rat rescue effort. Even local news crews lent a hand in trying to corral the abandoned rats.

So here's the thing I never thought I'd do on a Sunday afternoon. While we were out serving, we discovered that someone...

Many of the rescued rats will need to be separated for the time being, particularly the pregnant females. One of them had babies on Tuesday, Pascoe wrote on Facebook. The rats that were dumped are a mix of babies, adults and elderly animals. Unfortunately, some of the rats were found dead.

"I have been in communication with borough council, our public works department and Codes department in hopes of resolving this issue," Dent said. "We are also placing proactive steps in place as well for the safety of residents."

The source of the rats remains a mystery, but authorities in Steelton and Harrisburg are trying to get to the bottom of it.

Anyone with information should contact Steelton Police at (717) 939-9841 or send an email to amonroy@steeltonpa.com.

In the meantime, the rescue mission continues. Those looking to make a donation to the cause or adopt a rat can reach out to Pascoe or The Eclipse Project on Facebook.