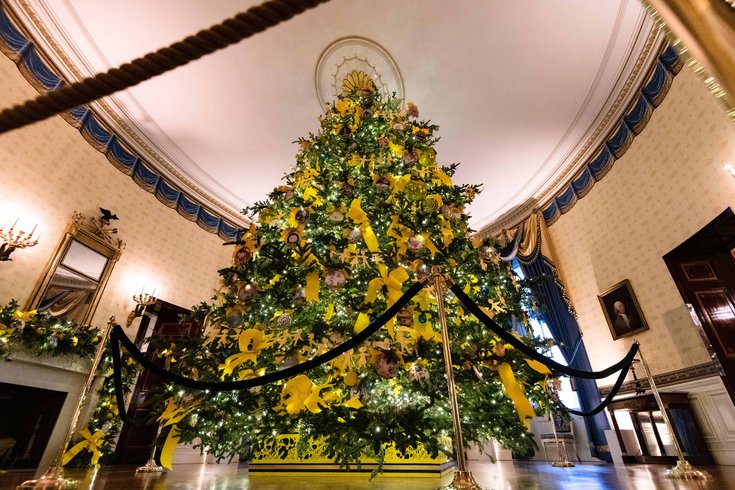 The official White House Christmas tree shown above is from 2020 during final months of former President Donald Trump's administration. In 2022, the tree will come from Evergeen Acres Tree Farm in Auburn, Pennsylvania.

The annual Christmas tree displayed in the White House this winter will be sourced from a farm in northern Pennsylvania, where Evergreen Acres Tree Farm won a contest for the holiday honor.

Every year, the National Christmas Tree Association chooses the official White House Christmas tree to be donated for display in the Blue Room, one of the three state parlors on the first floor of the building. This will be the 11th time a tree from Pennsylvania has won the contest, second only behind North Carolina.

This year's winner is a 20-year-old concolor fir tree that measures 20 feet tall and 13 feet wide. The tree will be transported to Washington, D.C. on a gooseneck trailer the week before Thanksgiving.

Evergreen Acres Tree Farm, in Auburn, Schuylkill County, is a third-generation business run by Paul and Pam Sheeler. This is the second time they've won the contest after one of their Douglas fir trees was chosen in 2000 at the end of Bill Clinton's second term.

The victory in the White House contest comes after the farm was selected Grand Champion earlier this year at the 2022 PA Farm Show, with a Nordmann fir tree.

"We were thrilled to win Grand Champion and are even more excited that Evergreen Acres will provide the White House's official Christmas tree," said Paul Shealer Sr., who recently passed the business to his son, Paul. "Evergreen Acres takes great pride in its trees every year, and it seems this year, as my son, Paul, and his wife, Pam, begin guiding the farm we can stand even taller!"

Our farm is honored to be providing the official tree for the White House which will be on display in the Blue Room!

In a typical year, the White House has a number of Christmas trees on display around the property, but the official tree in the Blue Room gets an ornament theme chosen by the First Lady. Those honors will go to Jill Biden, a native of Willow Grove in Montgomery County.

Although it's usually customary for presidential administrations to have Christmas trees in the Blue Room, especially during the course of the 20th century and after, there have been a few historical exceptions. In 1902, President Theodore Roosevelt's administration procrastinated and didn't order one before a Dec. 23 deadline. There also were no trees in the White House in 1924, 1907 and 1922.

In 1899, President William McKinley received letters from forestry advocates who urged him not to have a Christmas tree on display. The critics called the use of such trees "arboreal infanticide," according to an archived report in the Chicago Daily Tribune, while some considered the tradition more German than American. The McKinley administration ultimately displayed one tree in the White House's kitchen department that year.

Pennsylvania has more than 1,400 Christmas tree farms across the state, covering nearly 31,000 acres, ranking third in the nation.

"Pennsylvania growers produce one million of the nation's most impressive Christmas trees every year," Agriculture Deputy Secretary Fred Strathmeyer Jr. said. "We're proud to showcase our finest growers at the PA Farm Show each January. We're even prouder that a Shealer tree will represent our commonwealth and focus the eyes of the nation on world-class PA-grown product during the holidays."