Report claims Camden is most dangerous city in United States 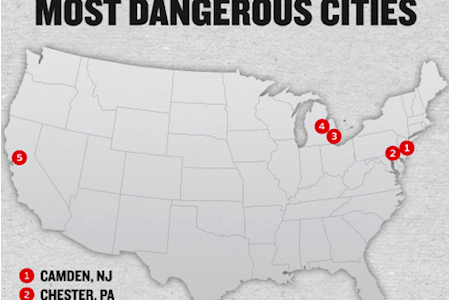 The rate of violent crime per population in Camden is found to be higher than in any other city in the U.S.

There’s a greater chance of becoming the victim of a violent crime in Camden than in any other city in the country, according to a new report by NeighborhoodScout.com.

The website, which provides crime, school and real estate data to prospective home and business buyers, analyzed the number of violent crimes reported, including murder, forcible rape, aggravated assault and armed robbery, per 1,000 residents in U.S. cities with 25,000 or more people.

NeighborhoodScout.com said on its site that it uses the most recent final, non-preliminary data as classified by the FBI, and that the latest complete set of crime data available for the country is for 2013.

In the story on its website, NeighborhoodScout.com says that "in the past year, Camden has seen 1,895 violent crimes."

"It's really a bogus report," he said.

There was no immediate explanation for the discrepancy in the numbers.

Calls to NeighborhoodScout.com were not returned Friday afternoon.

The website ranked Chester, which is in Delaware County, as the second-most dangerous city in America, and Atlantic City and Wilmington, Del., at eighth and ninth, respectively, while Philadelphia took the 55th spot.

"It hurts us," Thaddeus Kirkland, a state representative who is running for mayor of Chester, said about the ranking. "We are trying to reinvent ourselves because we are trying to bring businesses and industry into our city."

The safety of your city “is not how big your economy is, but what type of economy you have. What types of jobs, and who is attracted to those jobs,” NeighborhoodScout.com said. 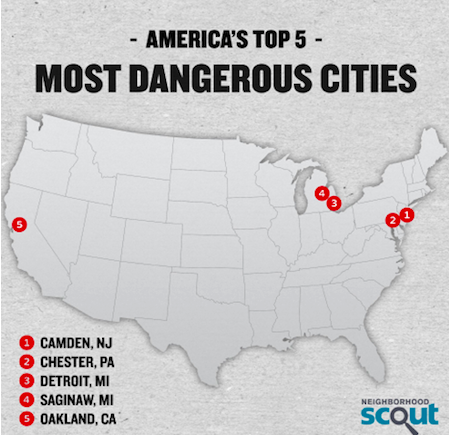