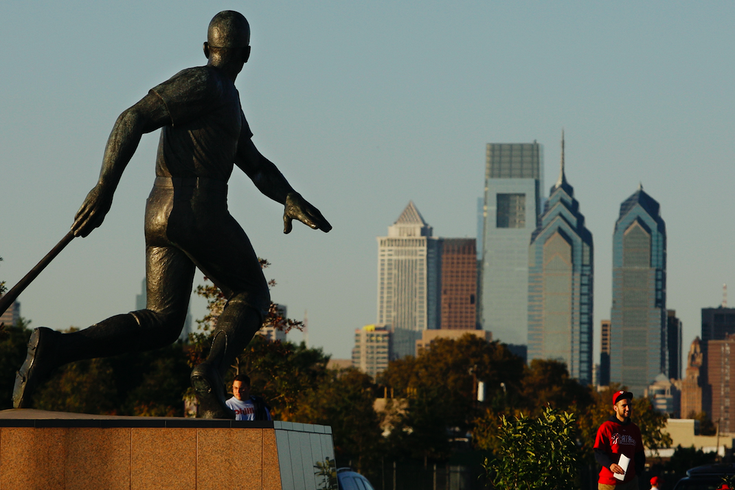 A spectator walks past a statue of former Philadelphia Phillies' Steve "Lefty" Carlton outside of Citizens Bank Park.

Demand for apartments in the Philadelphia area is on the rise, according to an annual report released Monday by Yardi Matrix, a market research service in the commercial apartment industry.

Despite modest population growth and employment numbers that trail the rest of the United States, Philadelphia's apartment market continues to benefit from strong performance in sectors including business and professional services, healthcare and education.

"Given the strong tenant base of young professionals that continues to absorb new product at a significantly fast pace, investor appetite is robust," the report says. "Last year, the metro’s multifamily transaction volume nearly doubled year-over-year, reaching a record high of $1.5 billion."

That number leaps out because it's more than twice the total value of property transactions in 2014. There are currently 8,700 additional units under construction citywide and a development pipeline that includes another 25,000 in the works.

From a renter's perspective, the influx of new apartments is encouraging because overall rent growth has been kept fairly well contained. Year-over-year through April, rents in Philadelphia rose 3.1 percent compared to a national average of 6 percent. Most of the increases were absorbed by the working-class renter-by-necessity segment, reaching an average of $1,060 on 3.7 percent growth. Renters-by-choice saw a 1.4 percent year-over-year increase to $1,721, led by units in Center City.

Philadelphia added 60,000 new jobs over the past year for a 1.7 percent increase that marks the highest rate since the recession. That's still below the national growth rate of 2.4 percent and comes after a five-year period when Philadelphia had the slowest employment growth among the 10 largest metro areas, according to the U.S. Bureau of Labor Statistics.

Projects such as the Comcast Innovation and Technology Center and the FMC Tower in West Philadelphia — a "vertical neighborhood" opening this summer with its own luxury apartments — are expected to boost job growth in the coming years. Ongoing development at the Navy Yard and regional growth in Bucks, Montgomery and Chester counties, particularly in the pharmaceutical industry, will also help the area's employment numbers.

The busy apartment market comes against the backdrop of a housing market that saw Philadelphia's property values surpass pre-recession levels in the first quarter of 2016, making it one of just eight major U.S. cities to reach that milestone. Demand has outpaced supply particularly in South Philadelphia and neighborhoods surrounding Center City. Uneven prices elsewhere for both renters and buyers likely reflect some of the forces described in the Pew Charitable Trust's recent report on gentrification in Philadelphia.

Over the next year, apartment hunters can probably expect rents to rise at a manageable rate, the report concludes.

"The new wave of Class A product combined with a growing flight to quality for higher-income households will continue to sustain modest but consistent rent growth across the metro. As more properties come online, the market may be softening this year, leading to a moderate rent increase of 1.3%."