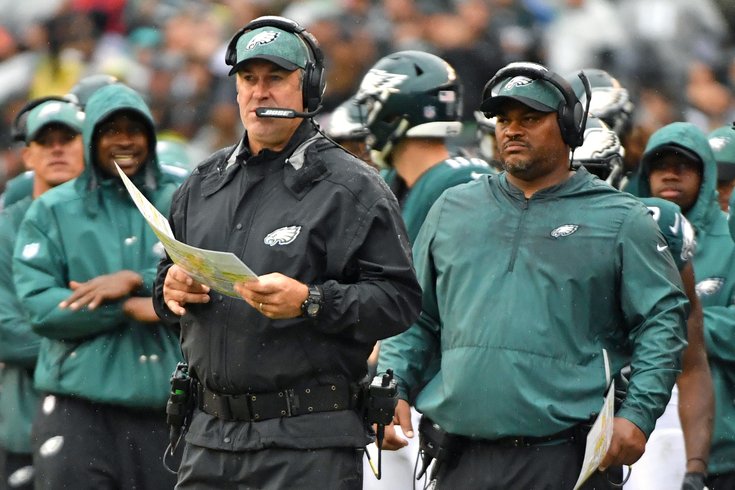 According to Tim McManus of ESPN, Philadelphia Eagles head coach Doug Pederson has tested positive for COVID-19, twice, and has informed the team as such.

Filed to ESPN: Eagles coach Doug Pederson has tested positive for the coronavirus, according to sources. He relayed the news to the team tonight after a second positive test confirming the news.

The Eagles confirmed McManus' report, and put out the following statement:

"We received confirmation this evening that Head Coach Doug Pederson tested positive for COVID-19. Pederson is asymptomatic and doing well. He is currently in self-quarantine and in communication with the team's medical staff. The organization is following the protocols established by the NFL and the NFLPA. Any individuals in close contact with Pederson at our facility have been notified and will continue with daily testing procedures and compliance with all protocols before returning to the facility."

In a press conference on July 27, Pederson felt confident in the safety measures put in place by the Eagles.

"I feel extremely safe," he said. "Obviously coming into it, there might have been some skepticism about the testing and the screening that goes on but it's very thorough. When you're here, you get tested in the morning, you have a screening process that you have to go through to get into the building; wearing masks in the building, everywhere we go, I feel extremely safe.

As we noted when three Eagles players were placed on the Reserve/COVID-19 list on July 29, here's a look at the protocols for returning to action (or practice) as part of a document outlining the educational training for players and all personnel from the NFL:

• When a player tests positive, they are immediately not permitted to travel with the team, access club facilities, or have direct contact with any other players or club staff.

The protocols for team employees/contractors are essentially the same:

NFL protocol for those who test positive and are asymptomatic: pic.twitter.com/gxek97YNH5

Pederson could conceivably return to the team after five days if he has two negative tests within that period, but the Eagles will obviously prepare as though he will be away from the team longer than that.

In what is already an offseason drastically shortened by the coronavirus pandemic, this is a significant blow, but the Eagles do have some experience in the coaching department to back up Pederson, and are better equipped to handle this development than other teams likely would.

• Jim Schwartz runs the defense, so that side of the ball should be unaffected.

• Offensively, the Eagles do have a number of assistants who are either new to the team, or have new positions. The challenge for the Eagles in Pederson's absence will be the lack of face time between the staff in organizing new ideas. From a roster standpoint, 10 of the Eagles' 11 projected offensive starters are returning to the team, and already know the offense. (Update: Passing game coordinator / quarterbacks coach Press Taylor was also sent home for precautionary reasons, per McManus. He reportedly tested negative, but was in contact with Pederson.)

Should Pederson remain asymptomatic and begin testing negative again after 10 or so days, the above protocol timeline would indicate that Pederson could reasonably be able to return near the start of on-field full-team practices, which begin on August 12th.