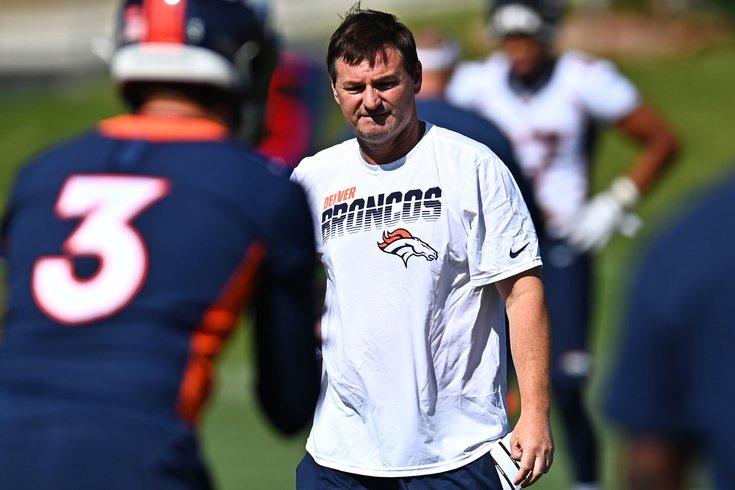 While some of the following coaching changes were already known through various media reports, the Philadelphia Eagles have officially announced their 2020 staff. The new coaches and/or job titles are as follows:

Scangarello, 47, has been coaching since 1998, and he is now on his 13th (!) different gig. Most recently, he was the Denver Broncos' offensive coordinator.

As you can see, Scangarello has a lot of experience coaching quarterbacks, and his placement at the top of the Eagles' coaching hires both on social media and in their press release might indicate that his hiring is of greater importance to the team than Press Taylor's promotion.

Scangarello will be counted on to work closely with Doug Pederson and bring new ideas to the offense.

Taylor's promotion to passing game coordinator was already known. It was added to his title of quarterbacks coach. Taylor continues to climb the ladder in the Eagles' coaching ranks. His history with the team:

Burke, 43, was already with the team as a special assistant to Jim Schwartz, with whom he has a long history. Like Scangarello above, he has been coaching since 1998, and has a long resume:

Many of Doug Pederson's coaching hires have been former players, and Manuel fits that theme. He was something of a journeyman safety, playing for six teams in eight seasons.

If you'll note, in Manuel's last season in the league, he played for Jim Schwartz in Detroit. He has coached in the NFL since 2012:

In Philly, Manuel will have the task of getting a number of new faces all on the same page, as the Eagles are likely to have turnover in their secondary this offseason. He will also have an opportunity to jump-start the careers of Sidney Jones and/or Rasul Douglas, a pair of 2017 draftees who have not lived up to expectations, if they're back with the team in 2020. Perhaps a new voice can produce better results.

Like Manuel, Moorehead is a former player in the NFL. He was an undrafted free agent out of Illinois in 2003 and had 85 catches for 1,293 yards and nine touchdowns in five seasons with the Indianapolis Colts.

Moorehead will be the sixth Eagles wide receivers coach in as many years. Like Manuel, he's likely to be coaching a number of players who will be added to the roster this offseason.

Like Scangarello above, Breiner will be counted on to bring idea generation to the table.

What they're saying: Eagles can still trade for Yannick Ngakoue, but it's now or never

What to know about hepatitis A, B, and C

Seven ‘superfoods’ to add to your diet