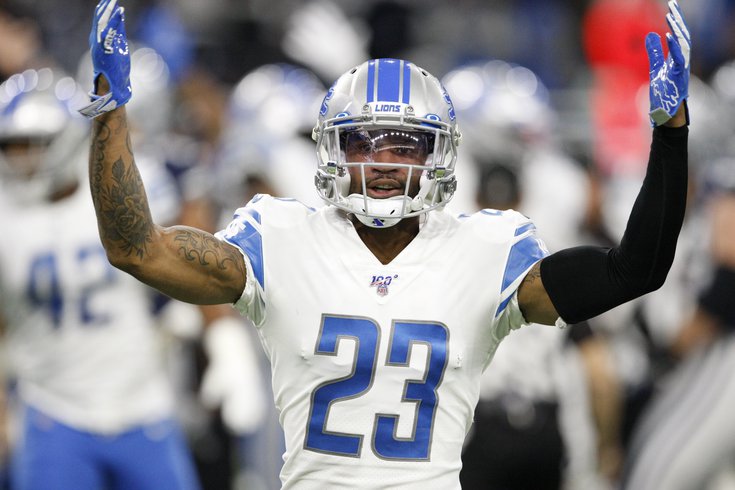 The Eagles are reportedly poised to trade for Lions cornerback Darius Slay.

UPDATE [9:44 a.m.] — According to multiple reports, the Eagles have finalized a deal with the Lions for Darius Slay, and have also worked out a three-year contract extension with the Pro Bowl cornerback. You can read the latest, here.

The Philadelphia Eagles missed on cornerback Byron Jones in free agency, so it appears that they are now pivoting toward acquiring Lions CB Darius Slay, via trade, and then giving Slay a new three year deal. The report comes via Josina Anderson of ESPN.

I'm told there are ongoing discussions right now regarding the framework of a 3-year extension as part of a trade that would send CB Darius Slay to the #Eagles, per source.

Slay was drafted by a Jim Schwartz-led team in 2013, and the Eagles were rumored to have interest in him at the 2019 trade deadline. Schwartz's influence on the Eagles' roster decisions should be blatantly obviously by now, based on the Eagles' history of acquiring his favorite players, the Eagles' jettisoning of others, and also based on a report by the Inquirer's Jeff McLane during the 2019 season detailing Schwartz's juice within the organization.

Slay only has one year left on his contract, and it appears that he wants to be the highest-paid corner in the NFL. It was no secret that the Lions wanted to trade Slay, and they were sure to tell Adam Schefter back in February that they are "adamant" about his value.

Lions have spoken with multiple teams about a potential trade for Pro Bowl CB Darius Slay, per sources. Any team that trades for Slay would have to compensate Detroit and Slay with a new deal. Other teams believe Slay will be traded this off-season, but Lions adamant on value.

To be determined what the cost will be (a) in trade compensation, and (b) in a new contract. The early guess here is that it will cost at least a Day 2 pick, and the financial commitment will likely be similar to what Jones earned on the open market. (Jones signed a five year deal worth $16.5 million per season.)

Slay has been something of an underrated corner in the NFL for some time, having played on a bad Lions team that doesn't often get national exposure. It was pointed out that he has been to three straight Pro Bowls, and he leads NFL with 82 pass breakups since 2015.

While the above is certainly true, Slay was probably undeserving of a Pro Bowl nod in 2019, as he battled a hamstring injury, and had a down year. Additionally, Slay's pass breakup and interception numbers are down drastically since a monster year in 2017, when he led the NFL with 8 picks and 26 PBUs.

The Eagles desperately need help at cornerback, and if Slay had been a free agent, in my view, he would have either been the best or second-best corner available, depending on whether you like him or Jones more. That's the upside.

We'll update with the trade/financial costs if/when this deal is consummated.