Report: Nick Foles traded to Bears after one season with Jaguars 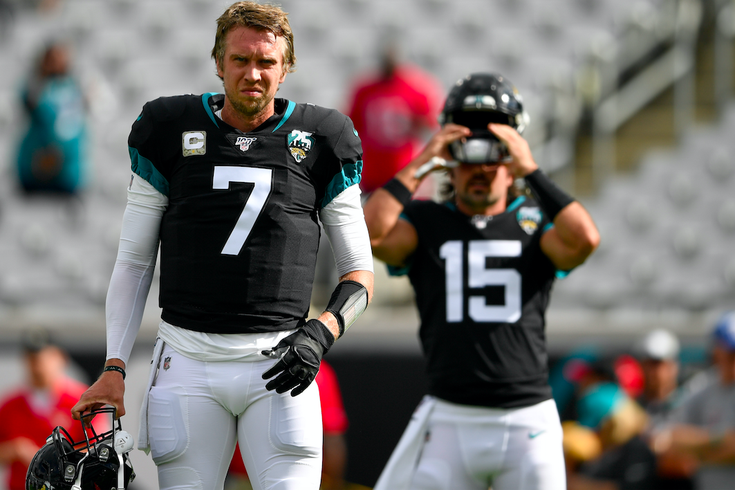 The Jacksonville Jaguars are reportedly trading Nick Foles to Chicago and handing over the offense to Gardner Minshew.

There were some rumblings earlier this offseason that the Jacksonville Jaguars were already looking to move on from former Eagles quarterback — and Super Bowl LII MVP — Nick Foles following an injury-plagued season that led to the emergence of Gardner Minshew.

Now, even after head coach Doug Marrone said Foles and Minshew would compete for the starting job in 2020 as the Jags continue their rebuild, it appears Minshew will be the guy moving forward. And Foles will be playing elsewhere next season.

Bears’ coaches such as Matt Nagy have worked with Foles in past and know him well.

According to reports, the Bears will be on the hook for the entire remaining balance on the $88 million deal Foles signed with the Jags last season. And Jacksonville will be left taking a pretty big cap hit as well.

The Bears will inherit the final three-years of Nick Foles' deal, which pays a base value of $50M. He slots in as their starter.

The Jaguars will take on a dead cap charge of $18.75M for 2020, while stockpiling another draft pick as they go through a franchise transition.

Of course, the Bears can rework that deal — assuming Foles isn't going to take a pay cut — and make it a lot easier to handle.

Foles carries $15.125m base (fully gtd), so he's not taking a paycut. But #Bears can restructure to make it more palatable.

Foles, who started his career with the Eagles before being traded for Sam Bradford and ultimately re-signing with the Eagles prior to the 2017 season, is now on his fifth team in the last six years. Last season in Jacksonville, a broken collarbone in Week 1 sidelined BDN for the majority of the season, and he was unable to regain his past form once he returned in Week 11, ultimately being benched in Week 13 in favor of Minshew.

In Chicago, Foles will be reunited with a couple of familiar faces, including head coach Matt Nagy, who was an assistant under Andy Reid during Foles' first stint in Philly back in 2012. He'll also be playing under quarterbacks coach John DiFilippo, who was the Eagles QB coach during the 2017 season when Foles took over for Carson Wentz and led the Birds to their first Super Bowl title in franchise history. And speaking of that magical Super Bowl run, Foles will also be reunited with tight end Trey Burton, who threw the touchdown pass to Foles to complete the now immortal Philly Special.

Unfortunately for fans hoping to see Foles face the Eagles, you'll likely have to wait. The Bears are not on the Birds' schedule this year ... unless, of course, these two teams meet in the postseason again like they did in 2019, when Philly snuck past Chicago at Soldier Field thanks to the "Double Doink."