Nick Foles could be on the move again, but a return to Philly is highly unlikely 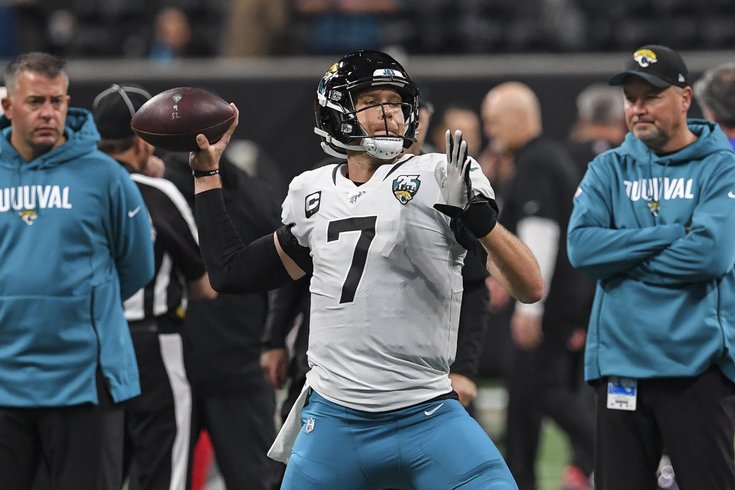 It appears as if Nick Foles could be on the move again, as the Jacksonville Jaguars are reportedly interested in moving on from the former Super Bowl MVP and Philadelphia Eagles' quarterback.

It appears that former Philadelphia Eagles’ quarterback Nick Foles could find himself on a new team for the 2020 season.

According to a report from ESPN NFL reporters Jeremy Fowler and Dan Graziano, the Jacksonville Jaguars are open to moving the former Super Bowl MVP.

We know the Lions have been trying to trade cornerback Darius Slay, but other trade candidates include Cardinals running back David Johnson and Jaguars quarterback Nick Foles. Both players carry contracts that would require their current teams to sweeten the deal, either with a pick or by paying part of the salary. And if Arizona can’t re-sign running back Kenyan Drake, Johnson could be a strong fallback (assuming they’ll actually use him this year).

In Jacksonville, word is the Jaguars want to go with Gardner Minshew II as their starting QB and, ideally, find a trade partner for Foles. Could a reunion with former Eagles offensive coordinator Frank Reich in Indianapolis be a possibility for Foles?

The 31-year-old Foles signed a four-year, $88 million deal last offseason to become Jacksonville’s franchise quarterback in 2019. However, Foles broke his collarbone during Week 1 last year and was out until Week 11 after undergoing surgery.

But even when he returned from injury, Foles struggled and was eventually benched for rookie quarterback Gardner Minshew, who started in Foles’ place while he was hurt. He ended his first season with the Jaguars with only four starts and three touchdowns.

The news of Jacksonville’s interest in moving on from Foles comes just a week after head coach Doug Marrone and general manager David Caldwell said that Foles would remain with the team and compete for the starting quarterback job with Minshew.

Naturally, there will be speculation about whether or not the Eagles would want to reunite with Foles for a third stint in Philadelphia and as a backup again to quarterback Carson Wentz. But Eagles fans shouldn’t get their hopes up because it’s highly unlikely.

Over $50 million of Foles’ contract is guaranteed money, and his deal is fully guaranteed next season for $15.25 million. Foles’ contract will count for over $21 million against the salary cap, and he’s due $14.875 million and $20 million in the final two years of the deal.

Trading him before June 1 would cost about $19 million, but if he’s dealt after that date, the Jaguars would save around $15 million with a dead cap hit of $6.25 million.

Similar to how it would make sense for Jacksonville financially to trade Foles after June 1, it wouldn’t make sense from a financial perspective for the Eagles to bring back Foles.

Having someone like Foles as a backup again to Wentz could be an ideal scenario, but the Eagles have made it clear that Wentz is their franchise quarterback. And Philly has backed it up by paying Wentz accordingly. Bringing Foles back to Lincoln Financial Field, the place where his statue looms over the franchise everyday, could only create more drama in the locker room and serve as a hindrance to Wentz’s development and confidence.

Even if Foles was cut by the Jaguars or willing to be a backup again, it’s a move that Doug Pederson and Howie Roseman are unlikely to make this offseason.

Additionally, Foles probably will not want to return to Philadelphia given the fact that he’s getting paid to be a starting quarterback, wants to be a starter in the NFL, and knows that the opportunity to start is not available to him at the NovaCare Complex in South Philly.

Most importantly, trading for Foles would all but chew up the Eagles’ cap room and limit the front office’s ability to improve the team in free agency this offseason. Philadelphia can’t afford to pay two quarterbacks starter money, and bringing back an aging Foles would handicap the team’s chances of making the team younger and retooling its receiving corps, secondary, and linebacking group.