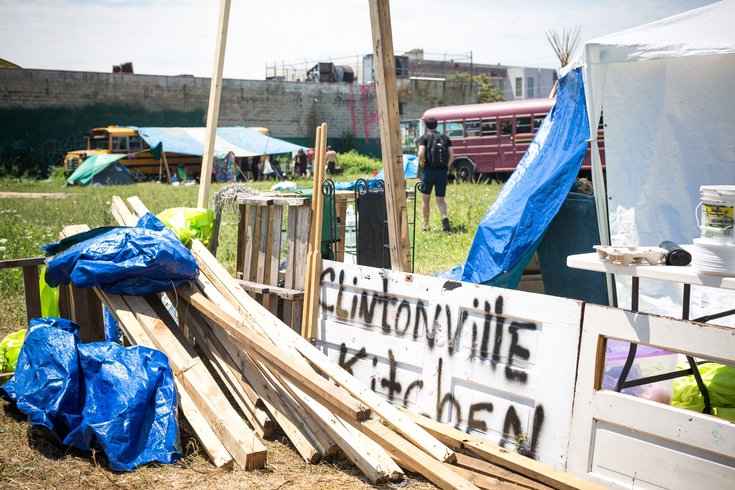 The remains of the Clintonville Shantytown kitchen after much of the pop-up tent city was destroyed by strong storms earlier in the week.

Six years after the Supreme Court's game-changing decision in Citizens United v. Federal Election Commission, money is pouring into super PAC's at an unprecedented rate, as anticipated. Yet in the 2016 general election cycle, the pivotal state of Pennsylvania has seen more super PAC donations coming from Democrats than Republicans, according to new statistics from the Federal Election Commission.

The latest numbers come via a report from The Bucks County Courier Times, which asked the FEC to compile spending records from Jan. 1, 2015 to June 30, 2016, the most recent date for publicly available data.

Under Citizens United, superPACs are officially classed as independent of any candidate and can receive unlimited donations from individuals, corporations, labor unions, and other organizations. Conversely, individual PAC donations are limited to $2,700 per election cycle and $5,000 over a full year.

As we approach the second general election since Citizens United, Pennsylvania has already seen about four times as much super PAC spending as it accumulated throughout the 2012 election cycle. That's with three big months left before the November election and more than a month — from July to mid-August — not even factored into the equation.

Pennsylvania as a whole, including individuals and other donor entities, gave $13.4 million to super PACs during the period in question. For the same period in 2012, that figure was $3.3 million. Direct donations to candidates, meanwhile, actually dropped slightly from 2012 to 2016, about $15 million down to $13.9 million.

More of the 2015-2016 super PAC pot has gone to groups supporting Democratic policy platforms than Republican causes, the Courier Times found in its review. The single-biggest donation total during this period, $3.15 million, went to the Democrat-backing United Steelworkers Union super PAC, followed by $157 million to the conservative-leaning America's Liberty super PAC.

That doesn't mean conservative groups are seeing a boost. The America Leads super PAC ($1.26 million) and Prosperity for Pennsylvania Inc. ($1.08 million) both received the next largest sums to advance GOP candidates, but aggregate spending during this period leaned more toward the liberal end of the spectrum.

What does this mean for Pennsylvania come election day? Money doesn't directly equate to votes, regardless of its influence, but these numbers could belie sporadic polls that have suggested Donald Trump has an advantage in Pennsylvania.

From January 2015 to July 2016, Pennsylvania residents directly gave $5.4 million to Hillary Clinton, $2.3 million to Bernie Sanders, $1.4 million to Ted Cruz, and $399,895 to Donald Trump, who has opted thus far to self-fund his campaign to the greatest extent possible.

In mid-August, the country is just now entering the final stretch during which super PAC donations skyrocketed in 2012, generally to support campaign advertisements and local networking efforts (what little funds are left over can, in some states, be funneled to state-level candidates).

Looking at the national numbers, a similar growth pattern has already formed in super PAC donations relative to 2012. In total, super PACs raised $828,224,700 and spent $609,417,654 in 2012, according to OpenSecrets.org, a federal campaign tracker run by the non-profit, nonpartisan Center for Responsive Politics.

What's interesting to note is that thus far in 2016, outside spending that excludes all PACs seems to be trailing the amount laid out in 2012. (Outside spending is defined as independent expenditures, electioneering communications and communication costs).

In the last three elections, including 2016, outside spending has been led predominantly by conservatives, who shelled out approximately $750 million in 2012 compared to less than $320 million committed by liberals. Combined outside spending amounted to $1,038,736,997 in the last election.

To date in 2016, the outside spending total is just ("just") $582,933,591—more than $400 million of which has come from conservatives. That may explain some of the discrepancy found in the political persuasion of super PAC spending.

You can learn more about the impact of Citizens United v. FEC at the Center for Responsive Politics' recommended reading page.