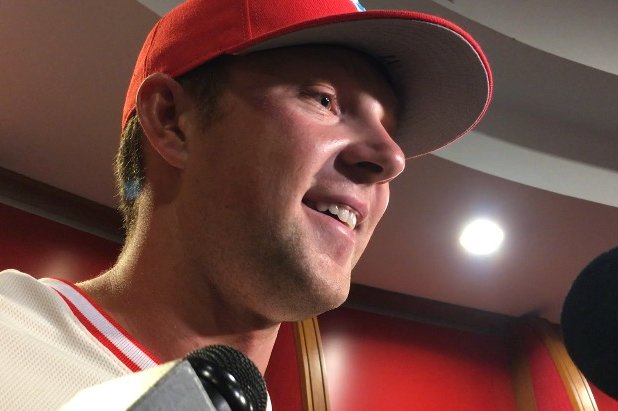 Rhys Hoskins on setting an MLB record as the fastest player in history to reach nine home runs: "“You get into the zones, you know? You can’t really explain it. There’s a lot of just bliss I guess, no thinking involved."

Rhys Hoskins is continuing to put his left sock on before his right, but, other than that, he hasn’t adhered to any strange superstitions as the home runs continue to pile up, one after another nearly every day of the week in his second full week in the big leagues.

He isn’t eating a peanut butter and jelly sandwich after batting practice every day. He isn’t chugging a pack of Reese’s Pieces before first pitch.

“No, no,” Hoskins said with a smile. “We’re pretty blessed with the food we get to eat. I have to take advantage of that.”

Instead Hoskins' routine is pretty simple: step into the batter’s box and, at some point in a game, hit a ball 400 feet or so over some portion of a major league ballpark’s fence.

He’s made it look almost too easy. As if you were playing a video game, created your own player, and gave him a 99 power ranking and a 95 in contact.

Rhys Hoskins continued to make Phillies history and major league history on Friday, when he took Chicago Cubs left-hander Jose Quintana deep for a two-run home run in the second inning of the Phillies 7-1 win over the reigning World Series champs.

The home run was Hoskins’ sixth in his last seven games. Beginning with last Saturday in San Francisco, Hoskins has hit a home run in every day the Phillies have had a game (the Phillies didn’t play on Monday, and he homered in just the first of the two games he played in during Tuesday’s doubleheader).

You get into the zones, you know? You can’t really explain it. There’s a lot of just bliss I guess, no thinking involved. It’s just one of those things. I’m not missing.

But wait, there’s more: all nine of Hoskins home runs have come over his last 12 games.

And, no, let’s really not bury the lead (although we did write this earlier, too): Hoskins is the fastest hitter in major league history in the modern era (since 1900) to reach nine home runs, doing it in his 54th career at-bat.

ICYMI – You can watch all nine of Rhys Hoskins' home runs right here.

“It’s pretty cool,” manager Pete Mackanin said. “The first hitter in how many games that he’s played to hit so many home runs with 21 RBIs. Very impressive. He just gives you quality at-bats. That’s what we’re looking for. We talked over the winter about getting professional hitters. He looks like a professional hitter.”

"We just kind of look at each other with blank stares when he does something like he's doing," said pitcher Jerad Eickhoff. "It's really cool to see and he's a great person. We're happy to see it and are really fortunate to have him on our team."

Hoskins was asked if he was shocked at the amount of success he’s had in what’s been all of 16 days since trading in his Lehigh Valley IronPigs uniform for a big league uniform.

“I’m not sure if shocked is the right word,” he said. “I'm confident in the ability that I have. Yeah, I don’t know what word to put on it. Shocked is definitely not it. I’m trying to just lose myself in the routine and the preparation, and let the ability shine through when it’s game time.”

• Hoskins has six more days to set another record with another home run: Ryan Howard holds the Phillies rookie record for home runs in a month; he hit 10 in September of 2005.

• Hoskins has already tied Pinky Whitney (August of 1928) for the most RBI in the month of August by a Phillies rookie.

• Hoskins is hitting .385 with six home runs and a 1.599 OPS in seven games since August 19. He has homered in three straight games for the second time this season, a season he’s only been a part of at the big league level for two weeks and one day.

“You get into the zones, you know?” Hoskins said. “You can’t really explain it. There’s a lot of just bliss I guess, no thinking involved. It’s just one of those things. I’m not missing. The game is a lot tougher when you miss pitches. And you do, it’s the nature of the game. But I’m not missing for the most part.”

If you're wondering: Hoskins' current pace would have him in line to hit 28 home runs if he plays in all 35 games remaining on the Phillies schedule in 2017.