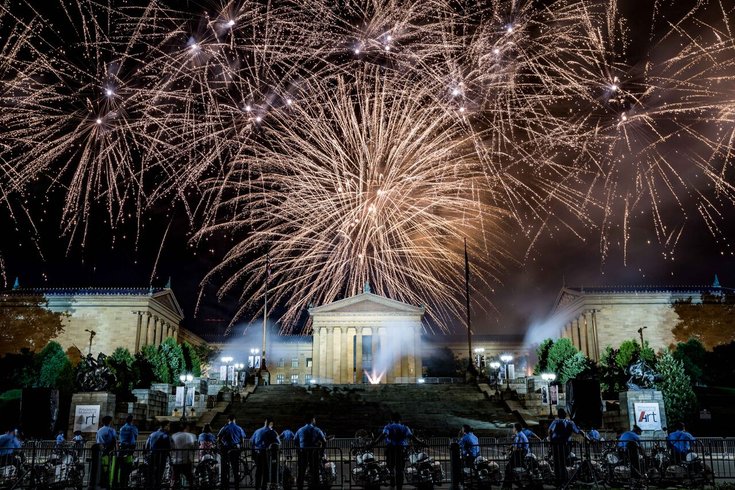 To cap off the 4th of July, a fireworks show dedicated to love exploded over the Philadelphia Museum of Art presented by Comcast NBCUniversal and Pyrotecnico.

The Wawa Welcome America Festival returns to Philadelphia in 2019 with six days of events running from Saturday, June 29 through the Independence Day celebration on Thursday, July 4.

More than 50 free events and concerts will take place in various Philadelphia neighborhoods, culminating with the Fourth of July concert and fireworks display on the Benjamin Franklin Parkway.

In preparation for this year's festivities, city officials have released an extensive list of road closures, restrictions and important public transit information for Philadelphia residents and visitors.

The following road closures are scheduled in relation to all Wawa Welcome America festivities, including set-up and deconstruction.

Event activity for the block part and gospel concert begins around Noon and runs until 8:30 p.m. on Independence Mall and surrounding streets:

Rocky-themed movie night beginning at 5:30 p.m. on the steps and apron of the Philadelphia Museum of Art:

• Westernmost travel lane of the Benjamin Franklin Parkway at Eakins Oval will be closed in front of the Art Museum between Kelly Drive and MLK Drive entrance from noon to 5 p.m.

• Kelly Drive inbound will be detoured onto Fairmount and Pennsylvania avenues

Concert and family-friendly activities beginning at 7 p.m. at Penn’s Landing:

• Chestnut/Market Street Viaduct, from Front and Chestnut streets to 2nd and Market streets, will be closed from 4 to 11 p.m.

POPS on Independence and Celebration of Freedom Ceremony Stage Construction

Event begins at noon on the lawn of the National Constitution Center:

Broadway and Navy Band performance beginning at 4:30 p.m. at the Kimmel Center:

• Westernmost travel lane of Broad Street (southbound side), between Locust and Pine Streets, will be closed from 2 to 8 p.m.

POPS on Independence and Celebration of Freedom Ceremony Stage Construction

Party on the Parkway Site Build

• Inner lanes of the Benjamin Franklin Parkway, between 20th Street and Eakins Oval, will be closed beginning at 9:30 a.m.

• Inner westbound lanes of the Benjamin Franklin Parkway will reopen between 3:30 and 6:30 p.m. for evening rush hour

• Inner lanes of Benjamin Franklin Parkway will close completely (both directions) at 6:30 p.m. through event breakdown on July 4

• Chestnut Street, between 5th and 6th streets, from prior day closures will be in effect until 7 p.m.

• 6th Street, between Market and Chestnut streets, from prior day closures will be in effective until 3 p.m.

All streets affected by the parade will be cleaned before being re-opened to vehicular traffic.

All closures listed below are in effect from approximately 4 a.m. on July 4 to 5 a.m. on July 5 unless otherwise noted:

All closures listed below are in effect from about 4 a.m. on July 4 to 2 a.m. on July 5 unless otherwise noted:

• 16th and 17th streets, between Arch and Spring Garden streets,s will be closed only if conditions warrant in the interest of public safety

Due to public safety interests relating to the fireworks show, all roads listed below will be closed from 5 p.m. on July 4 to about 1 a.m. on July 5, unless noted otherwise:

Roads will be reopened as event infrastructure is removed and sanitation operations conclude. Many roads listed above should be reopened to vehicular traffic prior to the times indicated.

On July 4, SEPTA's Regional Rail service, the Market-Frankford Line and the Broad Street Line will operate on a Sunday schedule with additional cars to increase rider capacity for the event.

At about 4:15 p.m., SEPTA will stage buses for those leaving the Parkway at the following locations (to depart upon event conclusion):

• Extra trains will run on the Broad Street and Market-Frankford Lines prior to the events to help get people to the Parkway.

• Regional Rail trains will be added to the service schedule or held later than regularly scheduled on most lines for customers leaving Center City Philadelphia after the fireworks and concert on the Benjamin Franklin Parkway. Ticket office hours will also be extended.

• Due to the numerous road closures, SEPTA CCT will have two designated rendezvous points at 2299 Arch St. and 560 N. 20th St. From 7 p.m. on July 3 through 5 a.m. on July 5, these locations will be used to coordinate CCT pick-up and drop-off for neighborhoods impacted by the Parkway road closures.

• ADA vehicles are encouraged to pick-up/drop-off along Pennsylvania Avenue and Spring Garden Street. But there is no parking available at these locations.

Paid parking lots and garages are conveniently located on or near the Benjamin Franklin Parkway. In the Historic District, there are many options including the AutoPark garage underneath the Independence Visitor Center at 5th and 6th Streets, between Market and Arch Streets.

To ensure the safety of all event-goers, large bags and containers will be subject to search at the entry-points listed above. The following are lists of permitted and prohibited items at the Party on the Parkway/Wawa Welcome America July 4th Concert & Fireworks:

Items not allowed inside the venue include but are not limited to:

• Weapons and contraband of any kind (regardless of permitting, e.g. Right-to-Carry permits will not be honored and weapons will be confiscated)

• Fireworks, firecrackers or explosives (including sparklers)

• Open flame of any kind

• Illegal or illicit substances of any kind

• Items that would obstruct others’ view (large signs, banners, etc.)

City officials are urging the public to refrain from bringing alcohol, large coolers, open containers or cooking equipment of any kind for safety reasons.

In emergencies or to report a suspicious person, activity or item (a backpack, package, or container), notify a police officer immediately or call 9-1-1. Do not try to open, move, cover or touch a suspicious item.

Additional information about the 2019 Wawa Welcome America Festival, including a full schedule of events, can be found at the festival's website.