Roman Quinn gets promoted, inserted into lineup: 'It's a surreal feeling' 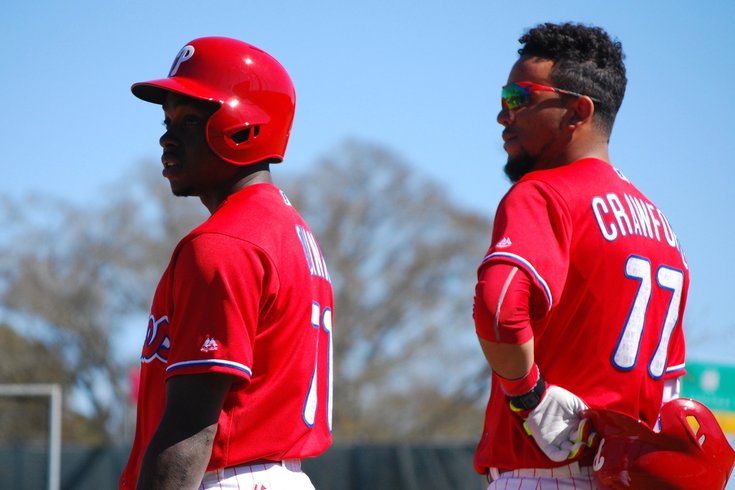 WASHINGTON – Seventeen days earlier, Roman Quinn stood outside the home dugout at FirstEnergy Stadium and reeled off all of the injuries that had prevented him from a full season since he was drafted as the Phillies' second-round selection five summers ago.

And less than 48 hours later, Quinn was hit in the tip of his helmet on a pickoff throw, leading to a concussion and yet another trip to the disabled list.

Everything possible did not go wrong, however, since Quinn was standing in the visiting clubhouse at Nationals Park.

The 23-year-old Quinn, a dynamic center fielder who brings to mind a young Michael Bourn (but with more pop), was called up to the major leagues for the first time in his professional career on Sunday, after Double-A Reading’s postseason run ended a night earlier. He joined catching prospect Jorge Alfaro on the commute from Reading to Washington early Sunday morning and arrived in time for the Phillies' matinee with the Nationals.

Manager Pete Mackanin didn’t waste any time getting a chance to play with his new toy: he batted Quinn second in his lineup and started him in center field in place of struggling All-Star Odubel Herrera.

“I’m definitely looked forward to getting out there and playing in my first major league game,” he said. “It is a surreal feeling right now, it definitely is.”

Quinn hit .287 with a .361 OBP, six home runs, six triples, and 14 doubles in 71 games at Double-A Reading this season. He was also 31-for-39 in stolen base attempts, which doesn’t include his stolen base on a pitch out in Friday night’s postseason game against Trenton.

In parts of five minor league seasons, Quinn, drafted out of Port St. Joe High School (Fla.) in 2011, has hit .276/.353/.402 with 159 stolen bases in 356 games. Quinn said his parents and girlfriend will come up from Florida to Philadelphia when the Phillies return to Citizens Bank Park this week.

"I had a lot of setbacks with injuries and everything like that that kept me back, but it all paid off, all the work I put in paid off and I’m glad to be here," Quinn said.

The 23-year-old Alfaro, acquired in last July’s Cole Hamels trade, hit .285/.325/.458 with 15 home runs, 21 doubles, and two triples in 97 games with Reading this season. Alfaro was up for one game with the Phillies two weeks ago, holding a spot on the roster as a backup catcher until A.J. Ellis arrived from Los Angeles in the Carlos Ruiz trade.