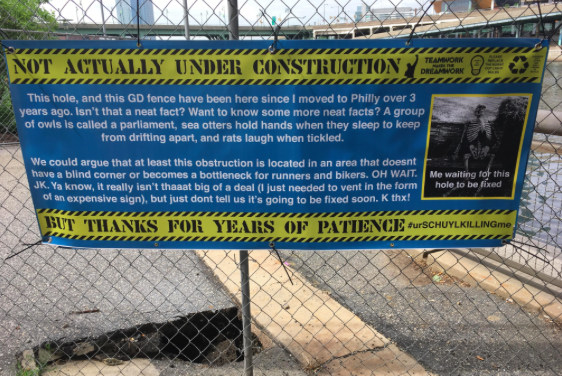 This sign was temporarily posted on fencing beneath the Chestnut Street Bridge, where a pothole has been haunting users of the Schuylkill River Trail.

Two years ago, USAToday and 10Best named the Schuylkill River Trail the best urban trail in the United States. There's good reason for that: it's huge, it's expanding throughout the Delaware Valley and hundreds of thousands of people use it for recreation every year.

That doesn't quite make it perfect, though. One Philadelphian fed up with a particularly annoying blemish on the SRT finally decided to make an example of it.

A photo that recently appeared on the Philadelphia subreddit, and later on the UrbanPhl Facebook page, depicts a brilliant sign that makes a complete mockery of the city's failure to repair a pothole underneath the Chestnut Street Bridge. Sometimes, the only way to displace festering anger is to find an outlet to joke about it, ideally by making others laugh.

This hole, and this GD fence have been here since I moved to Philly over three years ago. Isn't that a neat fact? Want to know some more neat facts? A group of owls is called a parliament, sea otters hold hands when they sleep to keep from drifting apart, and rats laugh when tickled.

We could argue that at least this obstruction is located in an area that doesn't have a blind corner or becomes a bottleneck for runners and bikers. OH WAIT. JK. Ya know, it really isn't thaaat big of a deal (I just needed to vent in the form of an expensive sign), but just don't tell us it's going to be fixed soon. K thx!

Further investigation of the pothole by BillyPenn revealed that the sign used the same design as an official notice posted at the site several years ago. As it turns out, repairing the pothole in question presents a serious structural nightmare since it hangs over the river. Fixing it properly would cost nearly a $1 million.

Fortunately, PennDOT does have plans to address the pothole during planned repairs to the Chestnut Street Bridge. The new sign, in all its glory, has been removed.