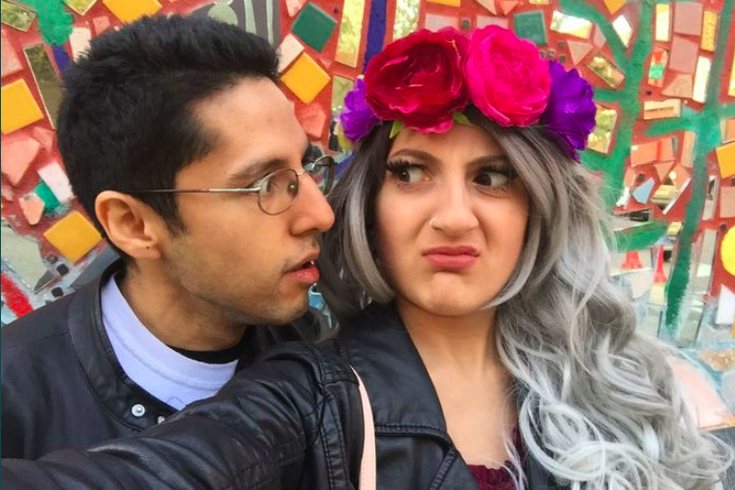 Rogelio Gonzalez asked his co-star/crush out on a date for the season finale of "Saturday Morning Fever," the Fuse docuseries that went behind the scenes of "Dancin' on Air."

There’s a scene more than halfway into the season finale of “Saturday Morning Fever” in which (spoiler alert!) singer and dancer Tina DeCara prepares for her “big date night with Rogelio,” the fellow cast member who spent much of the six-episode run working up the cojones to ask her out.

In it, Rogelio hater Marissa Rivera is on hand to provide cosmetics assistance – “I’m thinking more like natural, but smokey; natural-smokey,” the makeup artist suggests – while DeCara’s “momager” suggests showing some cleavage, treating breath with mints and ensuring that condoms are brought along for safety’s sake.

So, yeah, Tina said “yes” to last week’s cliffhanger out-on-a-date question. But, no, though a contrived theme that wound through many of the show’s 130-some non-commercial minutes, Ro-Ro-Ro Rogelio Gonzalez would not escape “the friend zone.”

In other words, the theme was like much of reality television in that it was steeped in the world of pretend plotlines to retain the audience. Weak sauce.

Let’s start at the episode’s beginning before aspersions cast negate the fact that the Fuse TV docuseries returned to a moderate level of awareness and the fact that “Dancin’ on Air” is still, well, on air. That is a good thing for the Philly old-head mainstay.

The episode starts with a botched American Idol-esque tryout at Malvern’s Turning Pointe Dance Centre (yeah, much of the show was, in fact, filmed outside the city limits).

There, some spark plug of a fellow named Eric from Oakhurst, New Jersey, proves that many people are not meant to dance on air. Others – as evidenced by the thirsty expressions of choreographer Clyde and a judge who goes unidentified as routines akin to the Sixers dance team unfold on screen – are.

Ro-Ro-Ro, who stopped by the PhillyVoice offices last week for a chat, falls into that latter category. Rather than focusing on his smooth moves, we go back into romantic entanglements.

Castmates chat about Tina’s cleavage-focused Facebook profile shot, which was apparently shot in the woods somewhere. Ro-Ro-Ro – with all the suaveness of a seventh-grader hoping to land a backward skate with his crush – asks her to step outside for a moment.

It's a contrived moment; the expressions – and how the show’s edited – try to mask the fact that everybody in the room knows what’s going on.

“That’d be fun, yeah. That’d be interesting,” she responds, wide-eyed, when the courting query that’s been teased throughout the show is finally extended. “Two weirdos on a date! What’s going to happen?! Let’s do something dope.”

Fast-forward to Ro-Ro-Ro showing off Tina’s picture while gaming with Cousin Victor, who approves aesthetically.

Fast-forward to the makeup/mints/condom chat, in which Tina responds with an awkward “I’m gonna give people boners” line to the cleavage talk and “She said condoms? EWW. GUYS, NO CONDOMS. DISGUSTING! YOU’RE MY MOM AND YOU’RE TALKING ABOUT SEX IN FRONT OF ME?! Too far, Mom.”

And fast-forward to the date itself, for which Ro-Ro-Ro’s mom is on hand – in what appears to be a server capacity, but for meet-my-mom cache – at a Buho’s Mexican Restaurant (Exton) that’d been cleared of customers for the moment.

There’s a less-awkward-than-other-scenes moment when Ro-Ro-Ro and Tina are driving to said date when the former chalks up global warming not to the ozone layer but the “Ro Zone that’s actually taking over.”

That vibe doesn’t last long at all.

Well, dag, she could’ve told him that earlier. Dag, she could've told all of us earlier. Unless, of course, she did and it was dragged out for dramatic purposes because, without it, there’d be less heft to carry this show for even the abbreviated six-episode run it received.

And that's kind of the thing about “Saturday Morning Fever” upon further reflection.

While it was pretty cool to be reminded of "Dancin’ on Air’s" continued existence, the goodbye roundup scene cemented the fact that viewers didn’t have time to make a discernible connection to the characters. Translation: The goodbyes elicit a shrug instead of a call for a second season, unfortunately. (Wish everybody the best of future success, though!)

If there is an exception to that indifference, it’s the impending wedding of host Casey Reed and her girlfriend/fiancée Brittany, who are shown celebrating their one-year anniversary. If Fuse wanted to air a six-episode look into their wedding planning culminating in the nuptials, that’d be worthwhile in a locally based reality-television sense.