Scientist's glowing fingerprints could give forensics a new technique 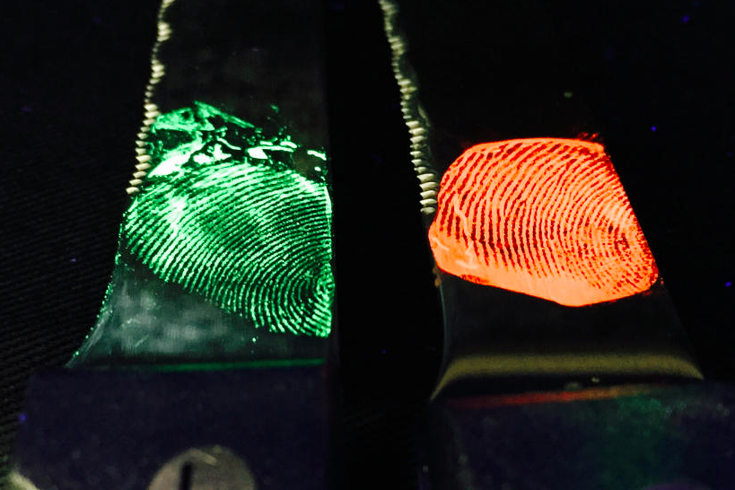 One of the most common procedures undertaken by crime scene investigators is dusting for fingerprints, but while the tradition has endured as a core standard of police work, a promising new method could offer speedier results thanks to an invention inspired by a burglary.

After Australian scientist Dr. Kang Liang was burglarized at his home, police dusted the scene for fingerprints but were unable to turn up clues that could help solve the case. Liang, a materials scientist at CSIRO (Commonwealth Scientific and Industrial Research Organization), decided he would get to work on developing a more reliable method for obtaining fingerprints, CNET reports.

Joined by his colleagues, Liang created a liquid that that forensics can apply to nonporous surfaces to reveal glowing fingerprints within 30 seconds under a blacklight. The liquid, which contains metal-organic framework (MOF) crystals, binds to the residue left by fingerprints, such as fatty acids, salts, proteins, and peptides.

"While police and forensics experts use a range of different techniques, sometimes in complex cases evidence needs to be sent off to a lab where heat and vacuum treatment is applied," Dr. Liang told the Sydney Morning Herald. "Our method reduces these steps, and because it's done on the spot, a digital device could be used at the scene to capture images of the glowing prints to run through the database in real time."

The MOF crystal method achieves this by replicating the fingerprint with an ultra-thin coating that can be photographed instantly for analysis. Investigators can also change the color of the glow by adjusting the chemicals in the solution.

"As far as we know, it's the first time that these extremely porous metal organic framework crystals have been researched for forensics," said Dr. Liang.

CSIRO is now seeking law enforcement agencies to partner with in Australia. Watch a dramatic demonstration of the technology in the video below.