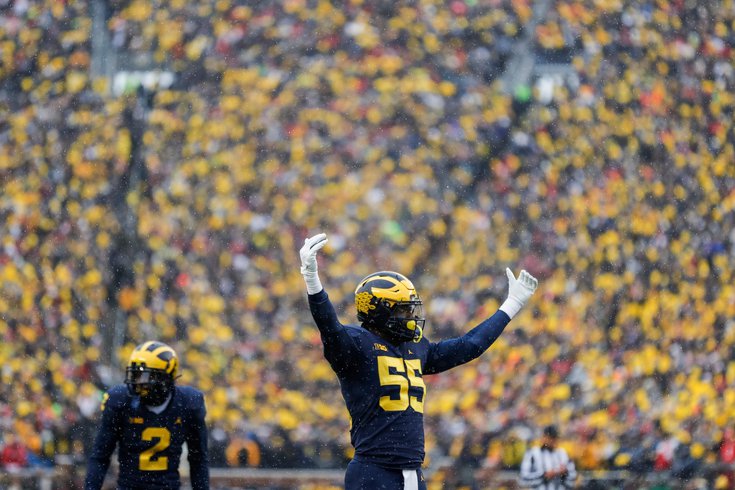 Why do this? Well, you already clicked, so got 'eem. Boom, I win. Here's my pointless, certain to be very inaccurate 2022 second-round NFL mock draft. The Eagles presently hold the 19th pick in the second round.

33) Buccaneers: Andrew Booth, CB, Clemson: The Bucs don't have many holes, so when it doubt, just keep adding corners and receivers.

35) Titans: Nakobe Dean, LB, Georgia: Dean fills a pretty obvious hole in the middle of the Titans' defense and might actually be a second-round Defensive Rookie of the Year candidate playing behind the Titans' talented front.

36) Giants: Kyler Gordon, CB, Washington: After Derek Stingley and Sauce Gardner went third and fourth overall, respectively, the Giants were left without an opportunity to add an elite cornerback prospect. They quickly add a corner in Round 2 to replace the soon to be traded James Bradberry.

40) Seahawks: Malik Willis, QB, Liberty: The Seahawks are a decent bet to trade up for Willis in Round 2.

41) Seahawks: Christian Harris, LB, Alabama: Seattle has to replace Bobby Wagner. They do so with a tone setter in Harris who has the athleticism to run sideline to sideline in the run game, and the ability to get to wide areas of the field in coverage.

42) Colts: Desmond Ridder, QB, Cincinnati: The Colts slapped a Band-Aid on their QB position by adding Matt Ryan. Ridder is a dual-threat quarterback who can be the No. 2 in the short-term (Sam Ehlinger ain't it), and a long-term successor.

43) Falcons: Boye Mafe, EDGE, Minnesota: The Falcons have noting in the pass rush department. Mafe is an athlete who impressed at the Combine and Senior Bowl.

44) Browns: Jalen Pitre, S, Baylor: Pitre is a versatile defender who can play safety and slot corner, and who was all over Baylor's stat sheet in 2021. He had 18.5 tackles for loss, 3.5 sacks, and 3 forced fumbles, to go along with 7 pass breakups and 2 INTs. The Browns could use help at safety and in the slot, so Pitre knocks out two needs.

45) Ravens: Skyy Moore, WR, Western Michigan: The Ravens traded Hollywood Brown during the first round. Well, now they have to replace him. Moore had a very productive 2021 season, catching 95 passes for 1,292 yards and 10 TDs.

46) Lions: Matt Corral, QB, Ole Miss: This pair just makes too much sense, as the Lions hope they have a 2023 successor to Jared Goff.

47) Commanders: Sam Howell, QB, North Carolina: If we've learned anything about Carson Wentz, it's that he responds well to the challenge of his team selecting a quarterback in the second round.

51) Eagles: David Ojabo, EDGE, Michigan: Ojabo tore an Achilles at his pro day, dropping him from a potential top 15 pick into (likely) the second round. The Eagles love them some players recovering from serious injuries in Round 2.

52) Steelers: Nik Bonitto, EDGE, Oklahoma: One of Bonitto's specialty traits is spying quarterbacks, which could come in handy in a division with Lamar Jackson and Deshaun Watson.

53) Packers: Cam Jurgens, C, Nebraska: I guess we're testing the "Jurgens isn't getting past the Eagles at 51" report here.

54) Patriots: Kenneth Walker, RB, Michigan State: Steal at 54 after the Pats reached wildly for Cole Strange in Round 1.

62) Chiefs: Phildarian Mathis, DT, Alabama: Andy keeps loading up on the D-line after taking George Karlaftis in Round 1.

63) Bengals: Abraham Lucas, OT, Washington State: Model of consistency for four years in college, can take over at RT whenever La'el Collins goes down.

If you actually read this to the end, shame on you.