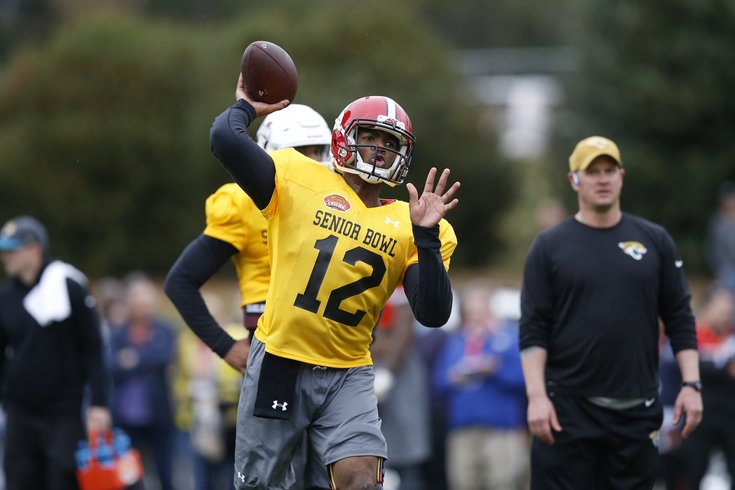 NC State's Jacoby Brissett could be a developmental quarterback worth considering.

MOBILE, Ala. -- The Senior Bowl week of practices is essentially over, with most NFL coaches, scouts, and media all having packed up and left Mobile. Here were the players of note on the final day of action on Thursday.

• A few weeks ago, we published our Eagles-only mock draft 1.0, which I'd like to wipe clean from the internet. In the third round we had Mississippi State quarterback Dak Prescott. Yeah, that's not going to happen. Prescott had a rough week and was often wildly inaccurate. I think he hurt his draft status in Mobile.

• A quarterback who may have helped himself is Jacoby Brissett of NC State. Back in December, we took a detailed look at Brissett's game. On the positive side, I liked his size, mobility, short game accuracy, and ability to throw on the run. However, I came away with the following overall assessment:

Brissett has ability, but he does not make quick decisions at all. At the NFL level, every quarterback has to be able to make plays from the pocket, and Brissett is (A) slow to deliver the football, and (B) way too quick to look to escape from the pocket. Brissett will compete at the Senior Bowl in a few weeks, so we'll get a better look at him then, but for now I see him as little more than a developmental project who will be taken late Day 3 of the draft.

I still think he's a Day 3 pick (rounds 4-7), but he showed improvement in terms of getting the ball out of his hands quicker.

• One guy who dominated on Day 3 was Eastern Kentucky's Noah Spence. We noted him as one of 10 defensive prospects to watch at the Senior Bowl:

Spence idolized Trent Cole growing up, according to Les Bowen of the Daily News. On Thursday, he looked a little bit like him, bull-rushing Georgia OT John Theus back into the quarterback. He also blew past LSU's Vadal Alexander on a pair of speed rushes, and beat Spencer Drango on a rip-and-dip move. He showed an impressive assortment of moves to get to the quarterback, and was probably the best player on the field on Thursday.

• Virginia Tech edge rusher Dadi Nicolas also had a good day. He beat Theus around the edge for a sack, as the South team OL had trouble blocking guys with quick-twitch moves. Nicolas is going to be a tough evaluation for teams. He's only 235 pounds, but he has arms longer than 35 inches, which help keep opposing offensive linemen from getting into his body. If you try to put too much weight on him, can he still be as speedy as he is now? Conversely, you don't want him on the field on run downs at 235, when he'll often be giving up close to 100 pounds.

• Another defensive lineman worth noting is Notre Dame's Sheldon Day. At 6'1, 286, he would have never been given a look by the Eagles under Chip Kelly and Bill Davis. But in Jim Schwartz's likely 4-3 scheme, he could be an intriguing penetrating one-gap lineman. Day played both at DT and DE on Thursday, and had a sack-fumble on an outside pass rush from his DE spot.

• One of the 10 offensive players we noted to watch at the Senior Bowl was East Carolina TE Bryce Williams:

Williams has great size and very good receiving skills. On the season, he has 58 catches for 588 yards and 4 TDs.

In his last four games, Zach Ertz had 35 catches for 450 yards and a touchdown for the Eagles. He showed down the stretch that he can be relied upon as the Eagles' starting tight end. That makes Brent Celek expendable. In 2015, Celek will count for $5 million against the cap, which is the 11th-highest cap total on the roster in 2016. That is wholly unjustifiable for a backup tight end. The Eagles should be looking to replace Celek with a cheaper developmental option if they cannot work out a pay decrease with him.

At ECU, Williams lined up as an in-line TE, an H-back, a FB and as a WR. He is a versatile player who can theoretically fit into any system.

Williams had a terrible week, dropping several easy passes. The Eagles probably won't have interest in a TE now anyway after getting Brent Celek to take a pay cut.

• A safety who had a good week was KJ Dillon of West Virginia. Dillon is a little under the radar having played on the back end at WVU opposite Karl Joseph, who is an absolute stud. This week, Dillon was physical and showed good coverage skills. Another guy who did some nice things was Middle Tennessee State safety Kevin Byard. He made several plays all over the field in the passing game. Southern Utah safety Miles Killebrew got some buzz this week as well. Some believe he could sniff the first round, although that feels unlikely.

The actual Senior Bowl game will air on Saturday at 2:30 p.m. EST.