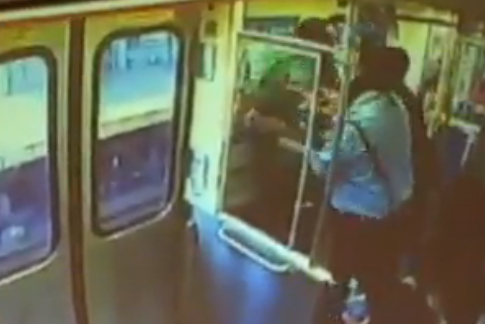 A SEPTA officer used force on an a reported fare evader while the man was still holding his young daughter.

The arrest of a SEPTA passenger Thursday evening is under investigation after security video shows an officer with 16 years of service under his belt first shoved the man against a wall while he held his 4-year-old daughter.

In this partial video that was posted online, officers are seen confronting the man on a subway car about an alleged failure to pay his $2.25 fare. The responding officer appears to grab the man by the throat and shove him against the side of the train while his daughter is still in his arms.

A 15-minute argument delays service until the man is handcuffed with his daughter still in his arms.

The man is then escorted off the subway car and onto the station platform, where shouting continues until he is wedged against the wall by an officer, still holding his daughter.SEPTA security video also showed that the man swung back at the officer.

The man has been identified as 20-year-old Ellis Smith, who according to the Philadelphia Inquirer had no previous record with SEPTA officers. Smith was charged with resisting arrest.

An internal SEPTA investigation is now underway after SEPTA Chief Thomas Nestel addressed the situation. He said the veteran officer involved in the confrontation told a supervisor he was afraid he would be disciplined if he walked away.

"That's a failure on my part," Nestel said in a press briefing. "This is the type of incident that causes us to reflect on what we tell our police officers and how we tell them."

Nestel noted that the department's recent work to reduce crime did not work the day the incident happened. He also stressed that while incidents where force was necessary in these types of incidents, they are never pleasant to see when happen.

"We can't endanger the lives of little kids over fare evasion. That's unacceptable. That's on me," Nestel said.

Nestel detailed the incident in a press conference on Friday.

Pending the outcome of the investigation, it remains unclear whether the officer in question will be disciplined.

Another video of the incident can be viewed on SEPTA's Periscope account here.