The initiative begins on Sept. 26 along Chestnut Street, Market Street, and JFK Boulevard in Center City 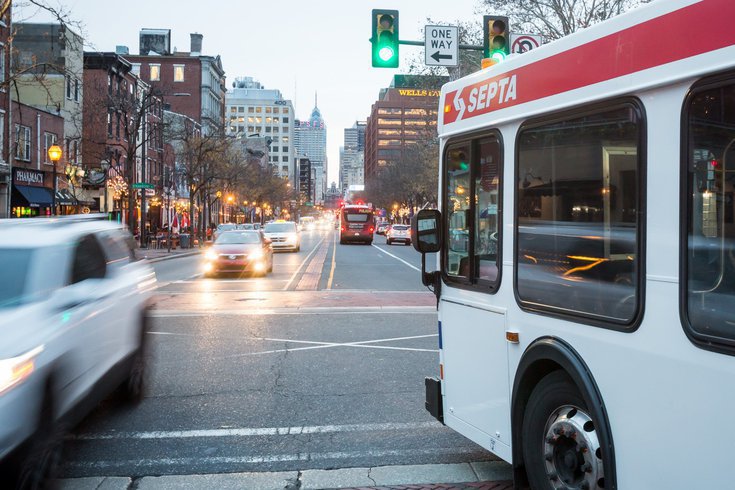 Philadelphia police are teaming up with SEPTA and the Philadelphia Parking Authority on an initiative to enhance enforcement of bus lane restrictions in Center City. It begins on Sept. 26 along Chestnut Street, Market Street, and JFK Boulevard.

The Philadelphia Parking Authority is partnering with SEPTA and other city agencies on an enhanced enforcement initiative along three busy Center City corridors. It begins on Monday, Sept. 26, on Chestnut Street from Sixth to 23rd streets, Market Street from Sixth to 23rd streets, and JFK Boulevard between 15th to 19th streets. Enforcement officers will issue violations for parking or driving in a bus lane, as well as making illegal turns.

"SEPTA's success is Philadelphia's success," Mayor Jim Kenney said. "Making buses faster and more reliable is a key goal for the administration as more people return to Center City for work and leisure, and we're grateful to partner with SEPTA and the PPA on this enforcement initiative. Enforcement of the existing bus lanes can significantly speed up travel for buses while improving travel time for drivers that obey the existing regulations."

In previous years, similar enforcement initiatives did not include JFK Boulevard. Its inclusion will expand on enforcements of bus, bike and right-turn only lanes on Chestnut and Market streets.

Beth Grossman, chairperson of the PPA, said drivers need to understand that cars parked in dedicated bus lanes are a threat to public safety – it puts the lives of pedestrians and SEPTA passengers at risk.

During the first enhanced enforcement blitz, which stretched from September 2018 through January 2019, 3,635 tickets were issued by the PPA, Philadelphia police, SEPTA police and SEPTA supervisors. Of those, 1,347 were issued for violations on Market Street, while 2,288 were issued on Chestnut Street.

During the summer of 2019, the agencies saw a 6.2% reduction in peak travel time on Chestnut Street between 11th and 21st streets. Nearly 700 tickets were issued by enforcement officers.

In the fall of 2019, the initiative resulted in a 6.4% improvement in transit travel times during the midday period along Chestnut Street. This led to a 2.5 minute reduction in travel time per bus along the corridor, city officials said.

"This enforcement effort will help SEPTA as it strives to provide our customers with efficient and reliable bus service," Leslie S. Richards, CEO and general manager of SEPTA, said. "These are key to the success of our upcoming bus network expansion, Bus Revolution, which is an extraordinary opportunity to make transit more useful for more people."

Bus Revolution, which was first organized by SEPTA officials in 2020, is a full-scale redesign of the agency's bus network. The inclusion of public opinion and feedback — which was previously available on the project's official website — seeks to make the transit authority more attractive to commuters and residents.

The upcoming enhanced enforcement campaign comes as SEPTA is still attempting to recoup its losses from the COVID-19 pandemic.

By working to eliminate excessive traffic congestion on these popular bus routes, SEPTA hopes it will be able to enhance its efforts to bring people back to public transit.