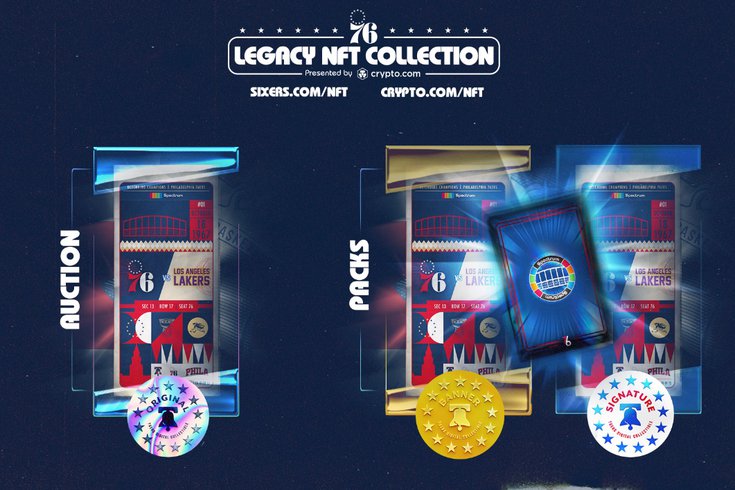 The NBA today looks at lot different than it did back in the Spectrum days.

The players are bigger and stronger across the board. Centers can shoot from downtown and teams live and breath at the three point line. The post-game is almost completely a thing of the past.

The game evolves. So does everything around it.

And there will no doubt be Sixers fans, many of the the same ones who long for for the good ol' days, who have absolutely no idea what an NFT (Non-Fungible Token) is. But the Sixers and a great many others believe it's the future. Which is why their (right now) unconventional limited edition collectible NFT collection, which the team is announcing Wednesday, is something worth paying attention to.

Trying to thread the needle between honoring the past and reaching hand over fist to the future is a tough task but the Sixers believe that've pulled it off.

"I grew up in the '70s and '80s and as a kid, whatever money I made from my paper route, I spent on baseball cards," Sixers president Chris Heck told PhillyVoice. "We’re seeing a Renaissance in baseball cards and other collectibles my generation grew up with over the pandemic. We also saw what NFTs are. I think 'tokens' is almost a bad description of what NFTs are. To me, they are baseball cards that are unique and numbered and they're all original because of those numbers. The difference is you can't bend the edges, they're on your computer, they're virtual. You can trade them, sell them, buy them from other people, you can buy them in an auction."

Still confused? Here’s a little more from The Verge’s explainer on NFT’s, which includes a very appropriate baseball card reference…

WHAT IS AN NFT? WHAT DOES NFT STAND FOR?

That doesn’t make it any clearer.

Right, sorry. “Non-fungible” more or less means that it’s unique and can’t be replaced with something else. For example, a bitcoin is fungible — trade one for another bitcoin, and you’ll have exactly the same thing. A one-of-a-kind trading card, however, is non-fungible. If you traded it for a different card, you’d have something completely different. You gave up a Squirtle, and got a 1909 T206 Honus Wagner, which StadiumTalk calls “the Mona Lisa of baseball cards.” (I’ll take their word for it.)

How do NFTs work?

At a very high level, most NFTs are part of the Ethereum blockchain. Ethereum is a cryptocurrency, like bitcoin or dogecoin, but its blockchain also supports these NFTs, which store extra information that makes them work differently from, say, an ETH coin. It is worth noting that other blockchains can implement their own versions of NFTs. [The Verge]

The Sixers will make 50 original NFT's available, each of them an authenticated commemorative ticket. They'll be broken down into three different “tiers” that are all considered very rare. These tiers denote the collectible’s scarcity. The greater the scarcity, the higher its value. Each drop will include an exclusive “Original Series" collectible (1 of 1) which will be available as an Auction item, as well as 49 mystery Packs. Generated at random, these packs will each include one piece of collectible art, either one “Banner Series" (1 of 3) or “Signature Series" (1 of 46) — which can be virtually unwrapped and kept or traded on Crypto.com.

Each of these will contain a custom made piece of art designed by Black Madre, a Brazilian artist well-known for these kinds of pieces. They will commemorate 13 of the best moments from the Sixers time in the Spectrum, from the title, beating the Lakers in 1967 all the way through the Dr. J. era and to the early 1990s.

That's the 21st century collectible part. But the Sixers make sure there is a throwback part to these items as well. "Original Series" owners — those who possess the NFT on May 1 of each year (for three years) — can get a fan experience for two at the Sixers' complex in Camden that includes being able to watch practice, a meet-and-greet with players, a game warn jersey, and a piece of the Spectrum court. Having multiples of the other collectible NFTs will include similar rewards.

"It took me time, and I was skeptical out of the gate," Heck said. "Why would I want this if I can't touch it or I can't put it on my wall? And that’s why we came up with the idea, let's actually include an experience in this — let's include something that is unique, not only virtual but also tangible. We're trying to mix and match a little but for people that are slower to adapt and even people who are fast adapters, it's kind of fun to have some other element with this auction item in your hands and not just on your computer."

The Sixers also know their fans are tailor-made for this. With a younger fanbase and a fanbase that is more literate in crypto, tech developments and NFTs, this is the perfect opportunity for their diehards — one that could grow each year.

"We do extremely well with fans that are 35 and younger and that’s been a trend we been driving for the last five plus years," Heck said. "This is something that falls into technology, it falls into analytics, it falls into forward thinking and thinking differently than the other traditional ways that I grew up with. Our fan base really does fall very much in line with the crypto fan base, they skew 35-years-old and under. It skews younger, but it doesn’t mean you cant be 52 years old like myself and learn something new and dive into it. That’s what we've been trying to do."