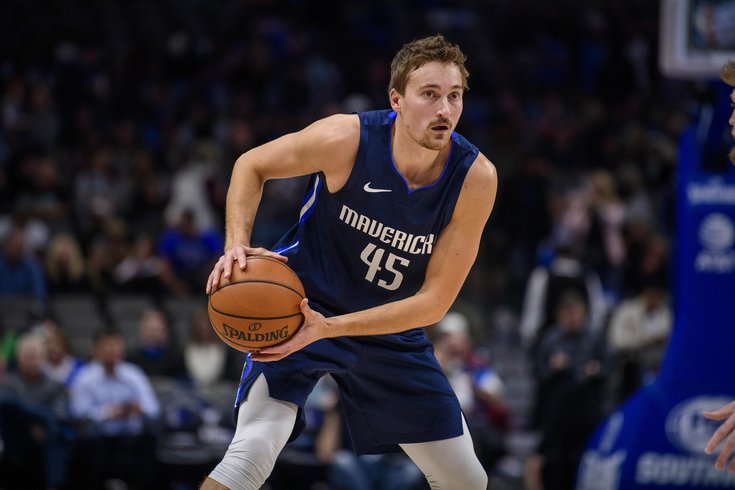 Dallas Mavericks guard Ryan Broekhoff (45) in action during the game between the Mavericks and the Cavaliers at the American Airlines Center.

The Sixers have agreed to a deal with forward Ryan Broekhoff, a source confirmed to PhillyVoice on Tuesday evening. ESPN's Adrian Wojnarowski was the first to report on the deal.

Broekhoff's deal with the Sixers is a non-guaranteed deal for the minimum, a source told PhillyVoice. The team is eager to get a look at him in training camp after signing him to contribute during the Orlando restart, a trip Broekhoff missed after his wife (who has an autoimmune disease) tested positive for COVID-19. The veteran forward said at the time he wanted to stay home to be there for his wife and take care of their one-year-old son.

The part you need to know as a Sixers fan: Broekhoff is a shooter. In 59 appearances over the last two seasons, the former Mavericks forward knocked down over 40 percent of his attempts from three, a skill the Sixers have desperately needed from any players coming off of the bench, even though they've upgraded the shooting touch of the top of their roster.

Waived by the Mavericks in February in order to clear roster space for defensive wing Michael Kidd-Gilchrist, fans shouldn't expect too much aside from the outside touch out of Broekhoff. Unfortunately, Broekhoff falls into the unitasker mold that many of their wings have fit into over the last half-decade. He's not going to give you any creative punch off-the-dribble, he's not going to add any defensive steel, he's here to do one thing and one thing only.

There's not much upside here compared to other guys who get looks in training camp. Broekhoff turned 30 in August and spent most of his professional career overseas, and he's going to be in a dogfight for a spot — even setting aside the likes of Seth Curry and Danny Green, Broekhoff now has to deal with competition from players like Shake Milton, Furkan Korkmaz, Mike Scott, and rookie Isaiah Joe, all of whom can bring some form of shooting from the bench.

In any case, Broekhoff brings a defined skill to a team that is loading up on players with that exact skill to fit around Joel Embiid and Ben Simmons. As an added bonus, there's an Aussie connection, and the Melbourne native should be able to connect with a countryman in Simmons, adding a bit of harmony to a group that has needed it over the last year and change.

And keeping Broekhoff in the mix is a reminder that the Sixers don't have to throw out all the work of the old regime just because it was the product of the old regime. Daryl Morey and Co. seem aligned on one thing in particular — if they can shoot, they may be able to carve out a role next to Philly's two young stars.