How will Sixers respond to sudden injury crisis? 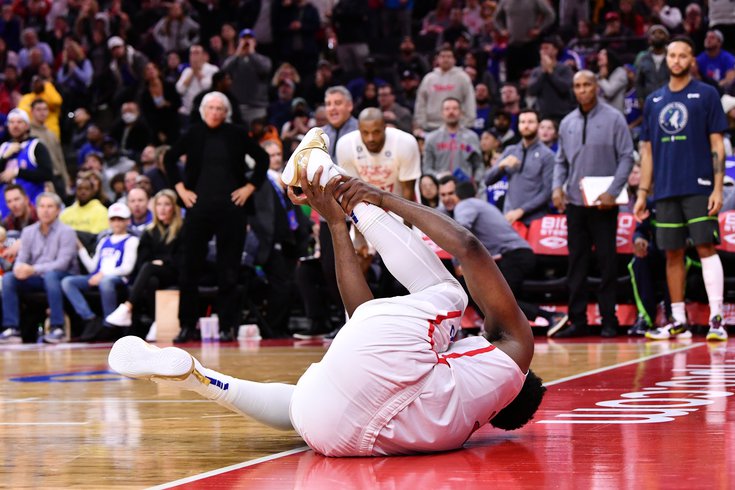 Across the NBA, November 22nd has been circled on the calendar since the schedule released. Scouts, reporters, coaches, players, just about everybody was interested to see Sixers vs. Nets. Ben Simmons vs. his old team, James Harden vs. his old team, a genuine rivalry game the week of Thanksgiving.

Now, in the wake of injuries to Harden, Tyrese Maxey, and Joel Embiid, the best the Sixers can hope for is fielding a team with enough NBA players to fill out a rotation. Philadelphia's injury crisis has reached the point that a foot injury for their seven-footer was viewed as a silver lining by their head coach, simply because it wasn't worse.

"Whenever a big guy goes, my eyes always go to his knees first and then work my way down. When I saw him grabbing his foot, I was already a little relieved because I thought maybe ankle," Rivers said. "But you just don't know, everybody's going down right now, and right now around here if somebody goes down, you get really scared."

That fear is well-earned. Philadelphia's three best players being on the shelf at the same time is not exactly what they planned for when they put this team together over the offseason. It's not something any team is really capable of absorbing, and with Tobias Harris' availability still in some doubt after his return to practice Monday, it's still within the realm of possibility that 4 of 5 starters will be out of the lineup.

And keep this in mind — Rivers noted Saturday night that PJ Tucker didn't start the second half vs. Minnesota so he could get checked out for a medical issue of his own. De'Anthony Melton has been in and out of the lineup due to back stiffness, and now he essentially can't afford to miss a minute of time, let alone the odd game here or there.

With Embiid specifically, his return comes down to when he is symptom-free. A source told PhillyVoice that it is possible he is available to play in their road game against the Orlando Magic on Black Friday, but even with some optimism on that front it sounds like they could end up erring on the side of caution and holding him out until he is truly ready to go.

From talking with people around the organization, it does not sound like the Sixers are going to react to this sudden crisis on their hands by looking for an external solution. A source who spoke to PhillyVoice on Monday afternoon said that was highly unlikely the Sixers would sign somebody to fill their open roster spot as a short-term fix. The team still values the extra room they have against the hard cap in this case, viewing that as more valuable in potential trades than it would be if the team were to sign somebody off of the street right now.

If any changes are to be made, sources say, expect the Sixers to tinker with their two-way guys a bit. Philadelphia probably wouldn't expect a new two-way player to play meaningful minutes for the big club in the short term, but they're in the process of looking at potential upgrades on who they have signed.

If you're still trying to look at this team for what they might be rather than what they are right now, you have to hold onto small victories. Monday, we saw Harden getting a sweat in on a treadmill in the corner of Philadelphia's practice facility, a few days removed from his first appearance in front of reporters post-injury.

Brief James Harden sighting at the facility today — seeing him able to get some cardio in on the treadmill is (sadly) a good sign for this group, even if his return is still a little way’s off pic.twitter.com/iYX2fKZO6a

There was also a slightly uplifting message from Maxey, who said it's possible he's out of his walking boot as soon as next week.

Slightly uplifting may be putting it lightly — Maxey's relentless positivity has not been sapped by the injury, the 22-year-old guard saying Monday that he's still grateful to have his family in town for Thanksgiving, and even just to be alive. As he tries to teach his dog not to jump on him during the healing process, Maxey says he's trying to do whatever he can to aid the guys who are still out there suiting up.

"I do whatever I can to help," Maxey said Monday. "So it's like, when I say stuff, I'm like, I don't know if I should say something because I don't if they're going to listen to me. But I try to tell them what I see, and it's been great so far."

If the world was as sunny as Maxey makes it out to be, maybe the Sixers would power through this stretch and find a way to come up with wins regardless. Frankly, this has been a situation where Doc Rivers has often been at his best as a coach, extracting more than you'd expect out of undermanned teams with bolder, more creative decisions than he shows when all of his stars are available.

Veterans on the team are trying to make sure fringe rotation players know this is a chance to make a statement, rather than a downer. Tucker brought the team in at the end of practice on Monday and reiterated to the group left standing that this was an opportunity for the men who are left to lead this team.

If everything goes right, Tobias Harris will be one of them. Harris has been the man who has altered his offensive approach the most this season, transitioning to a role centered firmly around spot-up shooting after playing much more of a hybrid role in the past. When Harden went down, we started to see more of him in the mid-post and as an on-ball creator, Embiid leaning on him in hi-lo actions and gleefully looking for him to attack mismatches. Now, he might be the hub of the offense, the player leaned on to help their new-look lineup survive.

On Harris' end, the best he says he and the rest of the group can do right now is take every moment seriously, using every chance and every angle to get themselves out on the floor.

"It's just figuring out, whatever you could do to get as healthy as possible in this time, do it," Harris said Monday. "And you know, at the same time, I got to be able to ready my body and see how I feel as well, but my mentality is to do whatever I can to help the group and help our team win."

"I came here today, practiced and felt good. Hopefully, tonight with another good night of sleep and rest and recovery I'll be able to go. My intention and my mindset is to be able to play [vs. Brooklyn]."

Between Harris, a potential return for Furkan Korkmaz, and hopefully a full game of availability for Matisse Thybulle — Rivers sat him for the second half of the Timberwolves loss — the Sixers are far from the group we thought might go on an ass-kicking campaign this season. For now, the goals are simple. Steal a game here or there and wait for the cavalry to come.

"Like I told the guys, what I really want to find is wins. Let's find a way of winning a game," Rivers said.