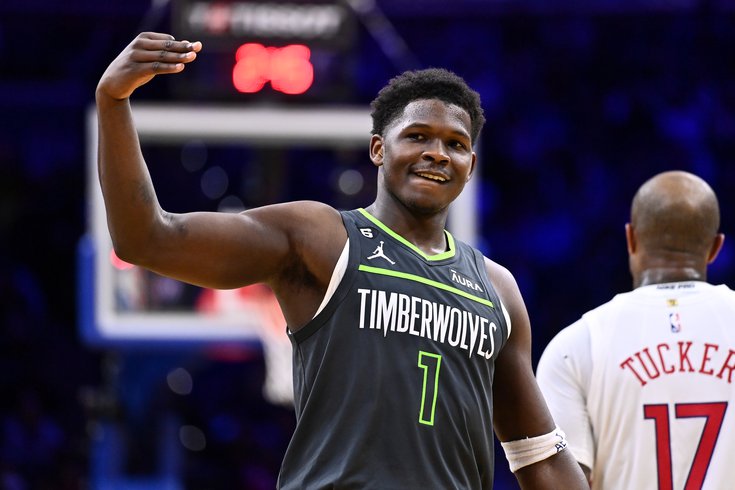 A gritty team effort ended just short of a storybook comeback for Philadelphia, with the Sixers falling 112-109 to Minnesota in the second half of their weekend back to back.

• Give the Sixers credit for this much — on a night where they lacked creative perimeter play and ran out of shooting luck fairly early, they made a concerted effort to get to the free-throw line. Mostly, Joel Embiid did his best to put the Sixers at the free-throw line, and he created Philadelphia's only real chance to win by trying to outlast the Wolves in a war of attrition.

At a point in the third quarter, it looked like Embiid had created an opening for Philadelphia, drawing the fourth foul on Karl-Anthony Towns roughly two minutes after Chris Finch subbed Rudy Gobert out for his fourth foul. Embiid against Naz Reid for the rest of the third quarter? That looked like a potential sweet spot for Philadelphia, who had hung around and kept the lead from ballooning any further with zone defense and trips to the line.

Frankly, this was some of what you wanted to see from Embiid during the middle portion of Friday night's game against the Milwaukee Bucks. Brook Lopez effectively walled him off from the paint in Philadelphia's win, and rather than letting Rudy Gobert do that to him for most of Saturday night, Embiid accepted the physical challenge and got into his opponent's chest. Gobert won some matchups, no doubt, but that's the cost of doing business against an elite interior defender. Embiid only had to win enough that it forced Gobert to take fouls, and then it was on to Towns, a much worse defender even more susceptible to fouling.

It is certainly taken for granted that Embiid can create such an insane volume of free-throw attempts while also cashing in so many of them as a seven-foot center. Most men his size are put on the line that much because the opponent wants them at the stripe, hoping for a pair of bricks to screw up the game. The opposite is true in this case. Teams are desperate for ways to stop Embiid, and fouling often ends up being the last resort.

There were some rough moments in this one for the big man, in spite of the monster stat line. I don't ever mind him missing shots or picking up some questionable fouls with aggressive play, but his mental sharpness was nowhere near where it needed to be for his team to have a chance in this one. His first half was basically fine from an efficiency standpoint — 16 points, four rebounds, and four assists on 4/7 from the field — but his five turnovers were mostly disgusting, unforced errors I'm sure he'd like to have back. At the league level, travel calls are a point of emphasis at the moment, and Embiid has been a repeat offender at changing pivot feet in recent games. He compounded those mistakes (at least two in the first half by my count) with errant passes and simply poor ball security, fumbling two different possessions out of bounds where he appeared to have the advantage to exploit.

But if the Sixers hung in and made the Wolves in this one, it is largely because of the work he did and the leadership he showed in some tough moments. Embiid got wrapped up under the hoop when Georges Niang was called for a charge late in the fourth, the Sixers calling a timeout with Embiid flat on his back under the basket. Limping toward the bench, it looked like he might have to wave the white flag.

Embiid not only stayed out there, he ended up diving on the floor for a loose ball roughly 45 seconds later, creating an extra possession for the Sixers with nothing more than pure grit.

In the end, his efforts were not enough to overcome a severe manpower deficit. But he can certainly feel proud of his group battling back, and of the work he did to lead that effort.

• Some nights, you get to talk about late-game execution and praise comprehensive individual performances in a win. Other nights, we must focus on the highlight of Paul Reed's season, and probably his career, when he turned what looked like a car wreck waiting to happen into a move that Hot Sauce of AND1 Mixtape fame would have been proud of:

When Reed was barreling down the court with the clock working against him, you could only think to yourself that this was going to be something. But all credit to him for the improvisational skills to steal two points at the death of the third quarter. I nearly fell out of my chair on press row.

• Georges Niang is pretty regularly scoring through contact at the rim these days, which is a nice thing to add on top of the shooting. Two layups through contact in the first half were thrown onto a pile of similar makes throughout the year.

• We can probably shame Philadelphia for errors in execution and for whatever they lack on the current roster, but their resilience in this game was legitimately impressive for a team battling injuries and playing their second game in as many nights. The Wolves, powered by some guys who could best be described as relatively frail mentally, left the door open for a Sixers comeback, and they nearly came all the way back. I'm not even entirely sure how it happened, but I don't think anybody should hang their heads in the locker room after this one.

• With the group Philadelphia has available, you're going to have to set your expectations relatively low for this group. In fact, let's get ahead of something — the Sixers might get absolutely torched by the Nets in Ben Simmons' presumed return to Philadelphia on Tuesday, and you may want to mentally prepare yourselves for that possibility. Anyway, back to the story at hand...

The Sixers didn't look completely terrible with their full "starting lineup" in the game, and I think if you grade them on a curve, Shake Milton and De'Anthony Melton did about as well as you could have expected running the team. When both guys were on the floor together, the Sixers had reasonably competent perimeter play. 40+ points from the two of them is probably more than you reasonably could have expected, and each had their moments throughout the evening. Melton was the superior defensive player, which should come as no surprise, and Milton absolutely bailed the Sixers out of some horrible possessions, reminding everyone of some brilliant scoring performances he had in the past.

But the second Shake Milton was subbed out of the game for Matisse Thybulle early in the game, or anytime Melton left Milton out there by himself, their creation issues became clear. Having a single trustworthy ball-handler on the floor in an NBA game makes it damn near impossible to run anything useful. And I'm not even sure you can classify Milton and Melton as "trustworthy ball-handlers" on their own — put together, they essentially add up to one, but both are overextended running regular pick-and-rolls and having to make decisions/run the offense.

Hell, even when the Sixers had both of their nominal guards in the game, life was sometimes a struggle on offense. Melton could not make a layup to save his life in this one, and the opening 24 minutes featured very little separation from Milton, the Sixers relying almost wholly on shotmaking to carry them. For a while, it looked like they might find a way to get by — Milton hit a couple of absolute junk shots in the first half, and Danuel House Jr. canned a step-back three in the corner that defied belief.

• When the Sixers are whole and can put any lineup on the floor that they want, we can scrutinize Doc Rivers' choices, pairings, and whether he staggers his stars or not. I am not sure how we're going to properly analyze this team in the weeks to come — they are banged up, incapable of putting together a coherent rotation, and devoid of passable guard play.

That being said, lineups with Karl-Anthony Towns at the five are decidedly not the time to play the Embiid/Reed frontcourt. There are numerous opportunities to go ultra-big against a Wolves team that went all in on size in the offseason. Take your chances then rather than forcing it just because P.J. Tucker was in foul trouble.

• I think characterizing Philadelphia's first-half performance as lacking effort is one of those things that will pop up a lot after this game, but I don't think that's what happened here. The problem is truly the opposite — the Sixers were exerting a ton of effort to try to generate anything on offense, and as that failed over and over again, it got much harder to summon the energy to get stops on the other end. Good offense feeds good defense and vice versa. The Sixers didn't have much of either in this one.

Certainly, there were moments when the Sixers could have offered a more inspired effort on defense. Backup units appeared completely unaware that they needed to defend the paint at times, with guys like Naz Reid just walking into dunks and layups after doing nothing more than jogging toward the paint. You can tell this is a group that hasn't played many minutes together collectively, with communication and execution errors popping up all over the place. That was the problem above all else, but clearly this group showed the proper want to win in this one.

You could argue the Sixers should have given Matisse Thybulle a longer look in this game, and given the state of the rotation, I'm not prepared to argue with you about it. But Rivers apparently decided one airballed three was enough, and Thybulle was parked on the bench outside of the five minutes he got in the first half.

• Good god, is Shake Milton a bad defensive player. I can't tell what he is thinking or doing half of the time, and his teammates appear to feel the same way, because there are a lot of botched possessions when he's on the floor.

• P.J. Tucker is not even looking at the rim most of the time right now. Not sure what's up with that because he's getting decent looks at shots in the corner. Are we going to do this with another Sixers player?

• This is going to be a rough couple of weeks without the starting backcourt. Prepare accordingly. Maybe I'll switch to the Eagles beat full-time until Harden is back.