What you missed in Sixers vs. Pelicans: the dawn of Philly's three-guard era?

Was Sixers win over Pelicans the start of a three-guard lineup? 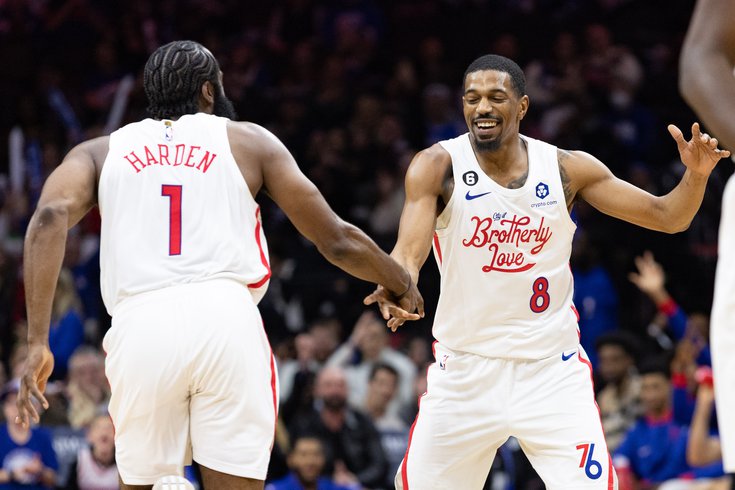 Three guard lineups could become more and more common for the Sixers.

The Sixers got their revenge against the Pelicans on Monday night, making up for a road loss in New Orleans late last week with a win on their home floor to open 2023. Despite two more big performances from Zion Williamson and CJ McCollum, the former cut short due to injury, Philadelphia managed to ward off the Pels and experiment with some new lineups in the process.

The most important lineup, a three-guard configuration, is the most thrilling thing from this game and the subject of our closer look today.

It’s as if all my advocacy finally paid off. Dating back to when they acquired De’Anthony Melton, we have discussed the idea of three-guard lineups in Philadelphia, a concept that rests on the versatility of Melton, the playmaking of James Harden, and the speed/shooting combo of Tyrese Maxey. But Doc Rivers hasn’t really had an opportunity to get these three looks together, thanks to injuries to their original starting backcourt in November.

That finally changed on Monday night. P.J. Tucker played just 18 minutes for Philadelphia, making way for sleeker, guard-heavy lineups early and late in the game. In spite of another poor outing for Maxey, the Sixers ended up plus-2 in his minutes overall, and we could be headed toward a future where that three-guard look is a crucial plank of their night-to-night game plan.

“I just thought we needed some speed in the game. They’re so long and they load to the ball a lot, and so when they do, the ball swings and attacks, getting in the paint and kicking it back out I thought would be good for us,” Doc Rivers said after the game.

Comb through the numbers and you can see the Sixers have been toying with these types of groupings whenever they’ve had the chance. Shake Milton has gotten a look next to Harden and Melton recently, and those lineups have cooked (+17.7 points per 100 possessions) in limited minutes together. Philadelphia’s best small-ball lineup early in the year, Harden/Maxey/Melton/Harris/Tucker, was surface-of-the-sun hot on offense. The assumption is that Harden/Maxey/Melton/Harris/Embiid will be the best version of this they’ll have over the long term.

Philadelphia didn’t exactly blow the Pelicans away out of that grouping early in Monday’s game, but you can see why it’ll have juice on offense. Watch how this Joel Embiid bucket unfolds and think of the options they have around the floor:

With Herb Jones tailing Harden and Wily Hernangomez playing up at the level in the pick-and-roll, the Sixers end up in a scenario where CJ McCollum is the low man, matched up with Embiid in the painted area. If Harden decides not to go there for any reason, he either has the swing pass to Maxey (40.9 percent from three) or the skip pass to Melton (39.7 percent), and either guy is capable of attacking a closeout with a quick pass or a drive to the basket in that spot. You can defend that near-perfect and still end up in a rough spot as a defense. And that ability to attack the closeout separates a lineup like this from one with Tucker, a pure standstill shooter at this point, in the same spot.

One of the other benefits of this configuration is that you can move guys around the floor in this look, using the unique talents of each guy to manufacture looks. As we saw throughout most of Ben Simmons’ time here, you can use Embiid as a floor spacer on possessions where you want other guys operating in and around the paint. Even on plays that get stuck — it was sort of a rough night for Tobias Harris in general — Melton is a great connective passer from the middle of the floor, smart enough to find the space and release pressure and quick enough to find the open man before the gap in the defense closes again.

Philadelphia would go back to this lineup late in the game, still very much in a battle with the Pelicans for breathing room. I thought their process, at least on offense, was better than the results suggested, in part because Maxey continued to struggle to get shots to drop. Harden spent a lot of crunch time moving Harris around the floor, a decision he explained to reporters in the locker room postgame.

“I wanted to get Tobias on the strong side, that way that weakside is only one defender over there,” Harden said Monday. “Joel’s rolling to the basket, either he has a layup, or the low man comes over there and I hit Joel, he makes a pass or I make the pass.”

It’s the other end that will ultimately decide how often they can go to this setup. There were some breakdowns collectively and individually in the final five minutes, including one play where Maxey overhelped and left Trey Murphy open for three, drawing a frustrated shout and some gesturing from Harden, who had the middle of the floor covered.

Regardless, it was good to see Philadelphia simply healthy enough to play this lineup, and encouraging that Rivers was willing to ride them late into the game, letting them play through some hiccups as they try to find their sea legs.

I mean really, who else could you even give this to? Embiid was questionable to suit up, and still turned in an effortlessly dominant outing, putting together his second big scoring game against the Pelicans in four days. This time, he saved some for the moments that mattered, owning the middle of the floor down the stretch.

• I feel insane for thinking the Sixers did a mostly good job of defending Zion Williamson in a performance where he shot 10-for-12, but I believe it all the same. Thought they did a good job of forcing him toward his right hand, and he had to make some tough, twisting shots to put points on the board.

• Say what you will about his performance, but it was wonderful to see Maxey check in and get a huge ovation from the home crowd after his long absence. He has more than earned the love from the locals, and I love how much they love to see him out there at all, let alone when he is thriving. The cynicism will come out at some point, but I enjoy the vibes while they last.

• Georges Niang reacted to one foul call like a little kid whose favorite toy had been taken away, laying flat on his back and kicking the ground over and over again. It gave me a good chuckle, the issues with the officiating in that game aside.

• Matisse Thybulle ended up on the right side of the plus’/minus battle in this one, and I must say as a constant skeptic of his impact that he did what he was there to do on defense. Melton did not exactly lock down McCollum in these two matchups with New Orleans, and though Thybulle didn’t win every battle with the Lehigh product, he definitely offered a different, often superior look in that matchup.

• On one possession in the second half, Harden ended up on Williamson with Williamson stationed in the left corner. Forcing a player baseline isn’t a terrible approach, but giving a left-handed player a clear path to drive with his dominant hand is just silliness. It’s the sort of simple error Harden makes often on defense, and it leads to high-quality chances for the opponent.